Long before orchestras from different countries started contributing to your regular AAA titles, you had programmers with an inkling of musical knowledge working with old-school soundboards and FM synthesizers. Starting in the mid-80s, glorious things happened; games now had bigger lives and personalities outside of their characters and game design. They had a score.

The Pandora’s Box of video game music had opened thanks to the power of gaming consoles and personal computers with audio soundcards (led by Creative’s industry-changing 16-bit Sound Blaster cards), and the talented composers & sound engineers who worked tirelessly around technical limitations for catchy music pieces.

Without in-game music, we wouldn’t have our emotions heightened when playing videogames.

So let us pay tribute to the wonders of videogame music, past to present, as we share with you what we consider to be landmark gaming soundtracks that help shaped a generation of music lovers, composers, and remixers that we know today.

Keep in mind that there are a LOT of good videogame music albums out there, so we’re just going to pick a few of our personal favorites. With that said, here’s part one of that journey, from the late 80s to the mid-90s.

To not include Koji Kondi’s 8-bit wonder is a crime against videogame music. As the composer of the now legendary Super Mario Bros. jingle (who haven’t heard or know about it?), he laid the foundation for his and future generations of video game composers and started the first in-game music revolution. He’s still doing music for the long-standing franchise today, letting everyone know that short melodies can make for truly memorable game music.

Manami Matsumae was part of a trio of composers (together with Takashi Tateishi & Yoshihiro Sakaguchi) who made awesome music for Mega Man 2. From the catchy Robot Master themes like Flash Man and Bubble Man, to the last stage-freneticness of Dr. Wily Stage 1, it goes to show that even with the barest of music-making tools, you can make aural magic so pleasurable to listen to. So much so that even tribute bands are naming themselves after characters from the game.

If you don’t know who Naoki Kodaka is, you haven’t been gaming in this era. He’s the man responsible for all the kick-ass tunes from Sunsoft titles, starting with Blaster Master to the Batman 2D action platformers on the NES console.

If you wanted a memorable arcade jingle, Hiroshi Kawaguchi was the go-to man back in the late 80s. He was the veteran who made sure that the pop-laced OutRun themes, the Top Gun/Days of Thunder-esque synth mash-up Afterburner action bits, and the jolly Space Harrier music seared into our arcade gaming minds.

The Japan-only version of the horror-themed action game had an extra sound chip in it so that the in-game music can be played at higher-quality 8-bit tunes. Hearing the Famicom synth mimic the hollowness of a harpsichord, and using extra musical layers to create its haunting pulse-pounding vibe was revolutionary for old-school players.

Meanwhile, those who played the US version on the NES got sloppy seconds in the form of the good-but-not-at-all-groundbreaking renditions of the background music. Just compare the Famicom version of the track “Beginning” with the NES version. The difference is about as clear as the comparisons between an original to a third-rate cover band.

When you think Amiga games, surely Chris Huelsbeck comes to mind. And when you think of the European composer, who’s renowned for revolutionizing music and audio on the European-favored computer, you think of fast-paced action games that uses the Amiga’s soundcard to create scores like this one:

Turrican’s fame elevated in the UK because of this composer. He’s also the reason why certain Amiga ports of PC games sounded better than the original.

Composers Masanori Adachi and Taro Kudo pushed the SNES’ sound capabilities really far, to the point where tunes felt haunting and old NES themes sounded refreshingly new. Castlevania’s musical benchmark was definitely rising, thanks to Castlevania IV’s music, but its apex in quality peaked only in the late 90s.

The Sega Megadrive’s FM Synth chip’s power and techno music go hand-in-hand thanks to the mind of one Yuzo Koshiro. After getting enough experience and expertise working on the awesome music of Falcom RPG titles like Ys, he brought his love of industrial music to the Streets of Rage series.

Tracks like “Fighting In The Street”, “Keep The Groovin’”, “Dreamer”, and “Expander” proved that the console’s sound chip was capable of producing better music quality than those found on other gaming platforms.

Jesper Kyd shines here using a custom-made Zyrinx Sound System for the Sega Megadrive, composing every tune he made on games akin to a Juno Reactor action beat. He struck gold with Red Zone and Adventure of Batman & Robin’s music, but Kyd got his start on consoles here with the music of the beautiful action game Sub-Terrania.

Do the phrases “Rolling Start” & “Let’s Go Away” ring any bells whenever you walked into your local arcade? Sure they do. Takenobu Mitsuyoshi made magic for this racing classic which lingered on in people’s minds up until today. This continued the tradition of arcade game makers like Sega, Namco Bandai, and Capcom to come up with ear-catching game opening jingles.

In 1994, Japanese RPG fans remember the above from Final Fantasy VI with their ears: the ominous intro of Final Fantasy VI, the distinctive themes of the 12 main characters you controlled, the last boss fight with the three-part Dancing Mad.

In 1995, Japanese RPG fans experienced a title created by the Dream Team of Hironobu Sakaguchi, Yuji Horii, and Akira Toriyama. All accompanied by the musical stylings of a sound engineer who threatened to leave SquareSoft (now Square Enix) if he didn’t work on said title.

These two games help elevated their respective composers (Nobuo Uematsu for FFVI, Yasunori Mitsuda for Chrono Trigger) to video gaming music legends. Ask any JRPG fan born in the 80s and 90s what his or her favorite tune was, and chances are it will be a tune from either composer.

The then-new CPSII board and Q-Sound chip on Capcom machines marked another level of audio evolution in the arcades. What better way for this new tech to make its debut than with a revised and upgraded version of Street Fighter II?

True, every fighting game fan preferred the next iteration Super Street Fighter II Turbo, but it was The New Challengers that served as an audio tech demo for future Capcom arcade compositions to come.

Composer Frank Klepacki took some inspirations from Nine Inch Nails and other percussion-heavy music groups, and put in his own twists and turns in his Command & Conquer compositions. Part industrial, part dance, and part house, with a few movie samples here and there, this RTS game’s OST is fondly cherished by many PC gaming fans.

If you don’t know who Terry S. Taylor is, then perhaps you haven’t been playing that many adventure games during that golden age of CD-ROM technology and Full Motion Videos (or more commonly just FMV). For every interactive movie game drivel, there were at least a few gems that used the medium well. The Neverhood, while a short adventure game, was a marvel to behold in sight and sound.

Stay tuned later this month for the second half of this article, which will feature landmark music from the late 90s to 2010 and beyond. In the meantime, please share with us your favorite game track and game music album between the 80s and 90s era! 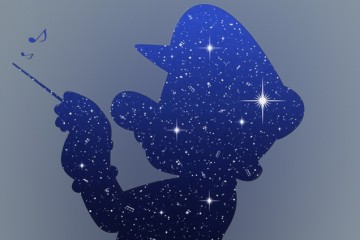