It’s all about the Creed this week…and lots of strange stuff.

Out on Friday, the latest game in the Assassin’s Creed series is knocking the reviews out of the park. Simply put it’s the best Assassin’s Creed game ever. Yes, better than Black Flag. We shall see.

Following up and fleshing out the RPG lite features that were introduced in Origins, Odyessy dives all in. It’s like the Witcher 3 had a baby with Origins and this is the product. 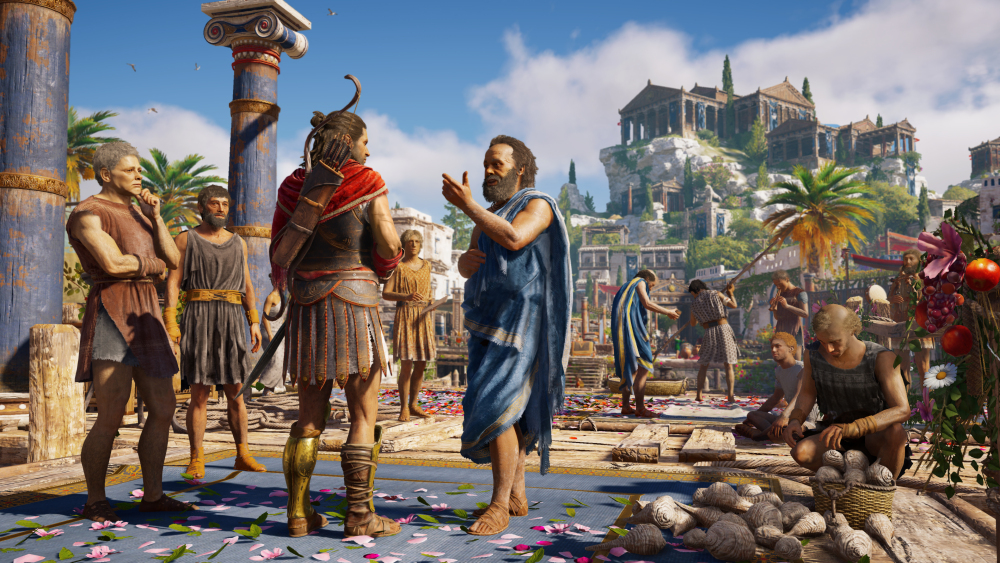 The game is set in 431 BCE, four hundred years prior to the events of Assassin’s Creed Origins. It recounts the secret fictional history of the Peloponnesian War, which was fought between the city-states of ancient Greece. The player takes on the role of a mercenary and will be able to fight for either Athens and the Delian League or the Peloponnesian League led by Sparta. As with previous games in the series, Odyssey features a narrative set in the modern day and follows Layla Hassan, who was first introduced in Assassin’s Creed Origins.

With over 100 hours of gameplay, we just wonder how we are going to finish this before Red Dead Redemption II comes out…sigh.

This PC oddity is heading your way in early 2019.  If you cannot fathom what the game is about from the trailer, we have you covered. From the publisher:

Shortly after being created, a player-customized humanoid robot receives instructions from its AI creator. It must learn the mannerisms, culture, and habits of humans, and learn to live among them. But not in the name of harmony! The AI seeks world domination, and to achieve this goal the robot must face the most difficult challenge known to man: talking to other humans.

If social scenarios such as job interviews, doctor examinations, and romantic conversations fill you with dread, you haven’t seen anything yet.  Manipulating the robot’s tongue and lips to simulate human speech is an ordeal of its own – intentionally challenging controls only exacerbate the difficulty, ratcheting up the laughs.

Squash and stretch its lips into fantastically ugly and absurd contortions to create the proper mouth shapes to emit different sounds. Manipulate the tongue to hit the proper buttons inside the robotic mouth. Keep that gross tentacle within the confines of the android’s jaw while also keeping coughing, stuttering, and awkward breathing to a minimum. A Karaoke-style text box guides the robot, suggesting extremely human phrases such as “HOW MANY UNITS OF CURRENCY ARE REQUIRED TO PURCHASE ONE ETHANOL BEVERAGE?”

Stuttering or tripping on words raises suspicion with conversational partners and makes speech harder to simulate. Systems shut down to due emotional stress, causing the android’s ears to pop out and its face to swell and twitch as it explodes with steam, oil, and electricity. With nimble fingers, you can help the robot can recover, and the gullible humans can ignore the smoke pouring out of its ears. Silly, trusting humans. Which you definitely also are.

Speaking Simulator’s hilariously absurd aesthetic willingly embraces the Uncanny Valley. By subverting regular social interactions and exaggerating the capabilities of the (totally) human face, anyone can relate to the poor android’s struggle. Maybe not so much with the world domination part.

Time for the strangest film to game tie-in. KURSK is the first ever documentary-adventure game. It focuses on the tragedy of the Russian atomic submarine K-141 Kursk, which sank in the Barents Sea in August 2000. The game’s plot will be largely based on facts, making the player a witness to dramatic events that shook the world at the time. The PC version is releasing on November 7th which is the same day the film also opens in theatres. Console editions will release in early 2019.

This is looking pretty interesting and the whole documentary style is pretty unique. The developers promise a mature story driven and cinematic experience. One to watch out for.

Super Hyperactive Ninja is a fast-paced hyper-caffeinated 2D action-platformer that is designed for those who want a real tough challenge. It could also be a major draw to speedrunners.

What to do? Recover the stolen coffee before you fall asleep! Use the power of caffeine to enter Hyperactive Mode, to run faster and kill enemies, but use it wisely! Your energy is limited and must be recharged with the coffees you find in the levels. If you run out of caffeine, its GAME OVER!

You can also play against a friend in crazy fast-paced 1-on-1 battles in the hidden Fight Mode! Use characters from other awesome indie games like Aragami, Jack from Caveman Warriors and Ace from Ice Cream Surfer! It all sounds pretty intense and the trailer makes us want to down pints of coffee. Yes, PINTS!.

The game will be out on Nintendo Switch on 25th October.

That’s all for this week. Brief and strange. We like that.