I punched a cardboard box open. A durian appeared. So, like any good gamer, I dutifully picked it up. When I tried punching the next box, however, I ended up throwing the durian forward and it attached itself to a corner of another box. Two confused seconds later, the durian exploded in a small mushroom cloud of smoke, taking me out with it. My last life was gone. Game over. But I couldn’t help but laugh.

O$P$ is a game full of oddly-flavoured surprises. Created by the Singaporean company No Average Joe (NAJ), O$P$ is a side-scrolling brawler styled after the arcade games of old. You play as “Big Chief”, a bearded man in slippers and an orange hoodie, who’s out to get back the money he’s owed. Big Chief rampages across Singapore, punching money out of villains, which accumulate as points at the top of the screen. 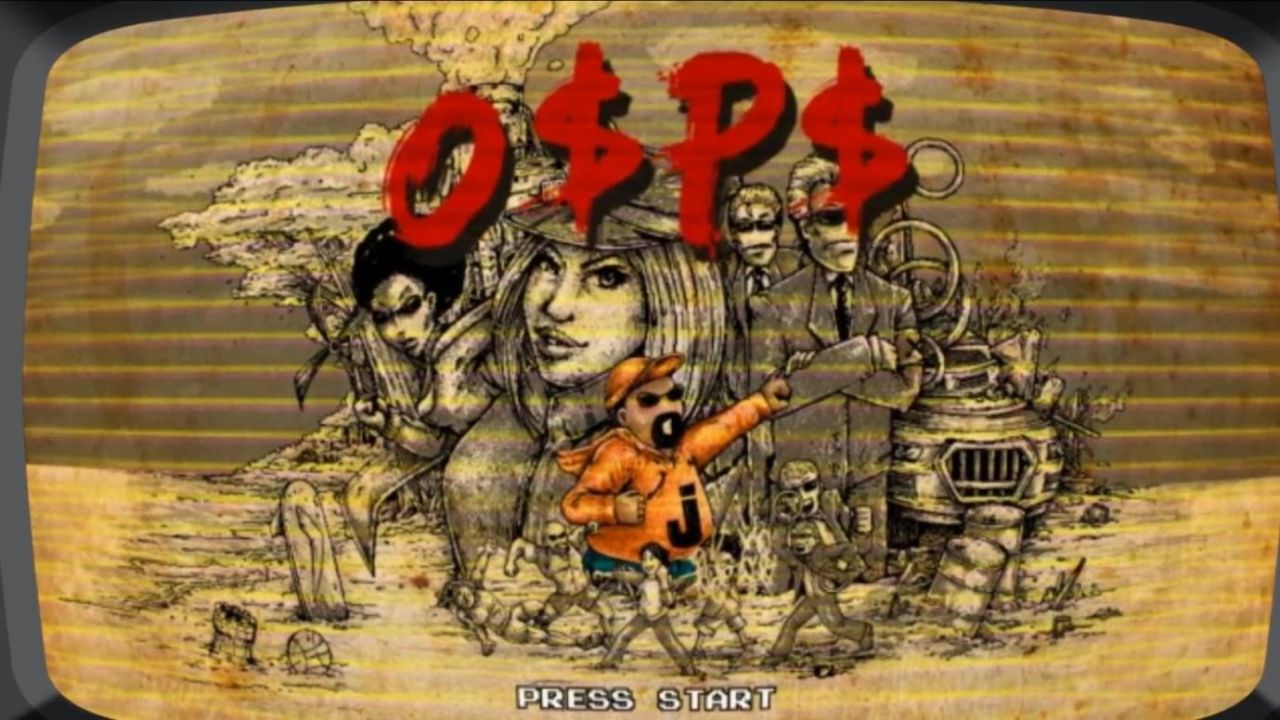 The old-school pixel art and gameplay was a blissful walk down nostalgia lane. At first, at least. But like the games of yore, I soon realized that O$P$ is merciless. One death brings you to a “Continue?” screen and a fourth spells a rather permanent “Game Over”; a start-over-from-the-beginning kind of “Game Over”. I’d forgotten that back in the day, back before save files and easy modes were commonplace, you actually had to get good at a game if you wanted to finish it.

But I wanted to finish it. Why? Because O$P$ is one of the most delightfully ridiculous games I’ve come across. Unlike the classic “Metal Slug” video from which it draws inspiration, O$P$ boasts an inexplicably eclectic suite of offbeat characters and locations. Its villains range from “Robo-Hitler” to a Japanese ghost in a haunted hut. What do pirates and boomerang-throwing roller skaters have in common, you ask? Beats me. But they’re both in the game. 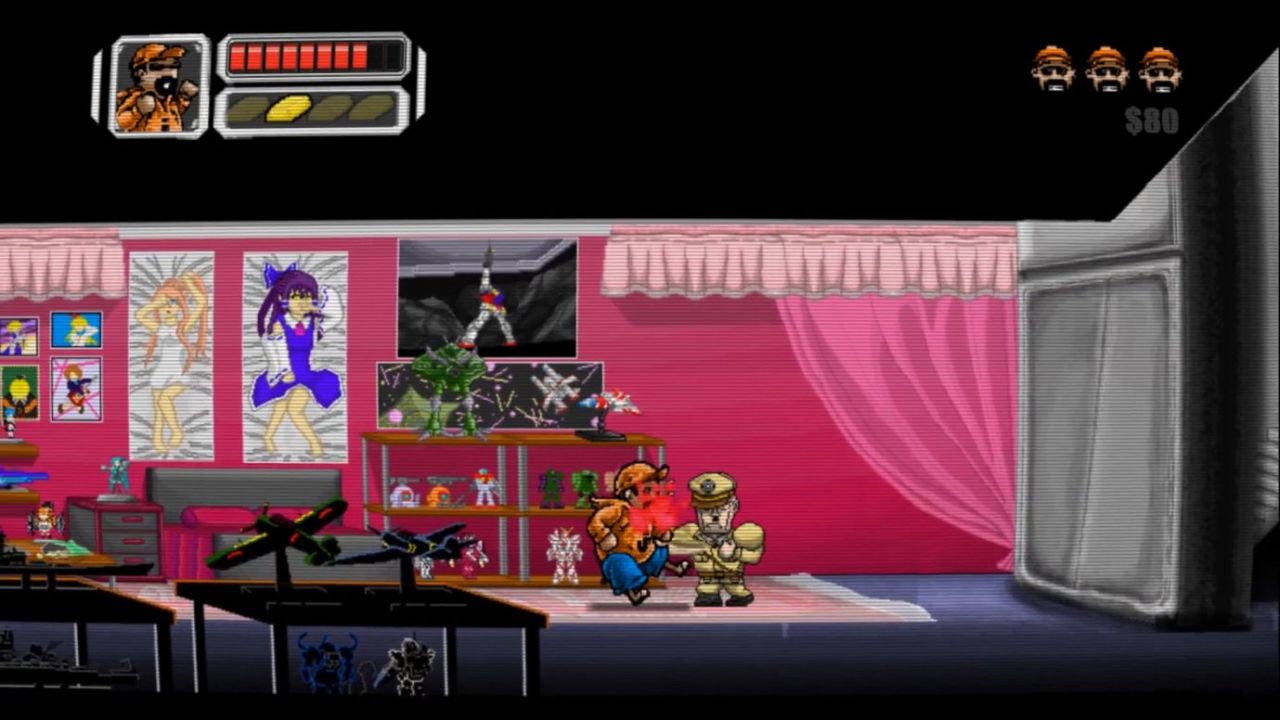 Big Chief’s allies are just as unpredictable, making them sometimes a little difficult to distinguish from your enemies. But finding out what powers my new friends came with, was its own thrill. For example, interacting with a friendly NSman – who, for some reason, hides in plain sight with a box over his upper body – turns you invisible, or so I thought. Interacting with a crazy cat lady sics her cats on your foes and annihilates them.

Even weapon drops are no exception to the weirdness. Over the course of the game, I got paintball rifles, DSLR cameras, durian-grenades and even retro brooms. 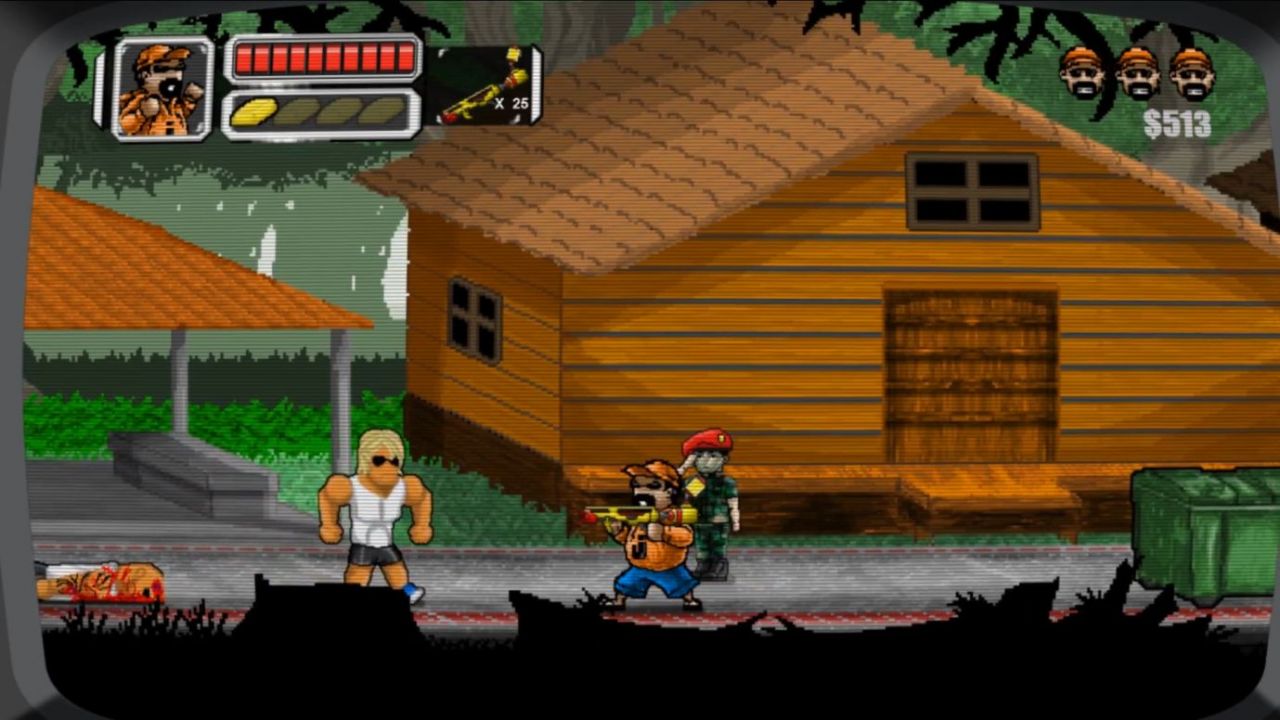 Part of what makes O$P$ stand out as a game is also its distinctively Singaporean flavour – though it’s less a defining theme than simply one part of its multi-faceted, colourful style. Big, blinking text at the screen urge you to move “faster lah”. Or, in case you didn’t quite get it the first time, the game also helpfully provides you with unsolicited alternatives of “Kin lah”, and “Jamban sini”.

Overall, the game’s graphics and animation seems slightly rough around the edges. But that’s perhaps unsurprising, given that until recently, NAJ has been better known as a video production company, not a game publisher. But what the game lacks, it compensates for with an irreverent, uninhibited sense of humour. 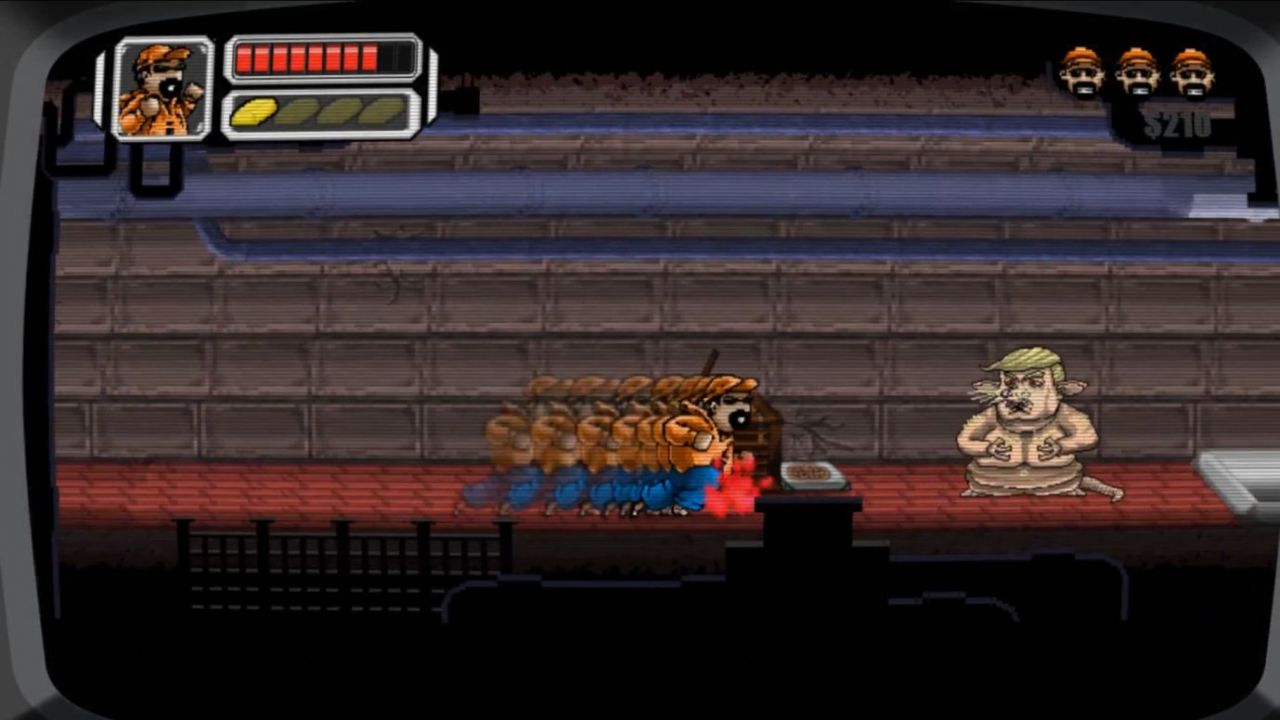 From the mishmash of characters to the deliberately silly sound effects, the one unifying thread throughout the game is the clear sense that its creators aren’t taking themselves too seriously. NAJ’s managing director, Joe Peter, explained to me that their aim as an aspiring game developer, was to show that “even noobs can provide a legit gaming experience” through the power of creativity.

Vengeance is a dish best served inside a video game

Legend has it that the inspiration for O$P$ first came from NAJ’s experience with a few naughty clients who refused to pay up for completed work that had even won industry awards. The sordid details of their battles with these now-ex-clients remained a little vague despite several interviews with different members of the NAJ team. I guess we’ll never know what the companies “Another Ugly Deutsche Invention” and “Suck my Tick” are referring to. 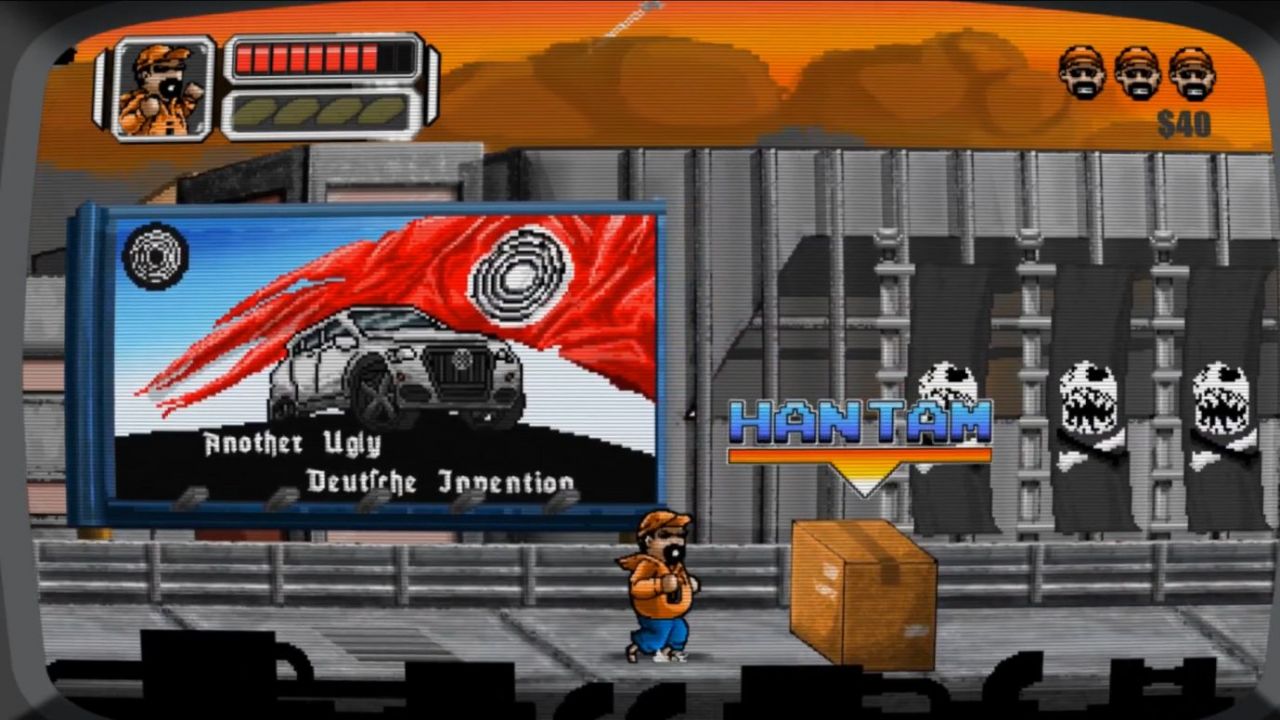 That knowledge lent a different patina to my discovery that successively kicking a downed enemy actually gets you additional cash. The collapsed foe eventually even disintegrates into a grisly ribcage, and then nothingness, if you keep at it long enough. But corporate vendettas aside, friends of NAJ will also quickly recognize that many of the characters in the game were inspired by real-life friends and employees of the company. And the main character, Big Chief, is in fact modelled after Joe Peter.

The real hero of the game, however, never appears in it at all. Glenn Michael, the project’s main programmer, started the project as an intern from Republic Polytechnic and stayed on with the company for another seven months to see the project through. Plagued by problems with character animation, file compression, platform compatibility and all kinds of other issues, completing the game became an arduous process, but also a real labour of love.

Michael notes that the game was originally meant to be longer, but because of all the technical complications involved, it was unfortunately cut short – which is a real crying shame, since it would’ve been fun to see what other oddball characters the team had planned.

Everybody loves a franchise 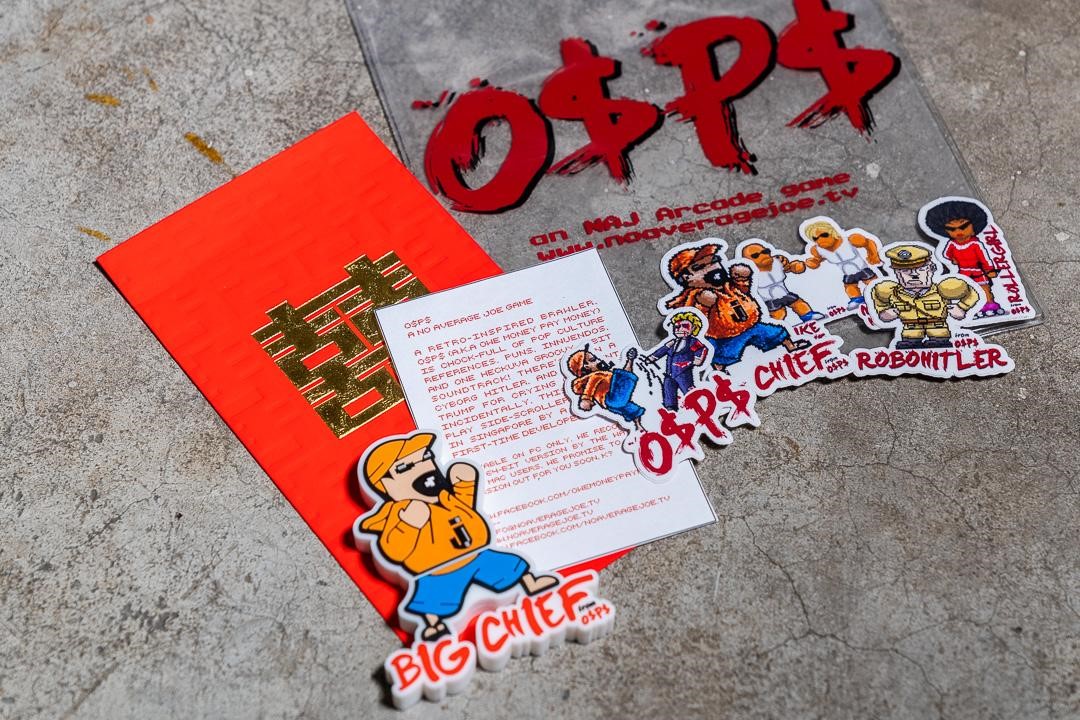 Bolstered by the positive feedback for O$P$, NAJ has already begun work on a sequel, entitled OTOT, or Own Time Own Target – a retro-styled couch 1v1 shooter, designed to ruin all those friendships you never really wanted anyway. Set 100 years in the future of the O$P$ universe, OTOT promises to deliver all the same eccentricity of its predecessor, but with more ambitious game mechanics.

Incidentally, PC gamers (sorry, Mac users) will be able to blow up corporate Nazis with durians in O$P$, which will be free to download by 1st December 2018 onwards. For those who can’t wait, and want to feel a tad special, NAJ will be selling a limited-edition collector’s edition of the game at GameStart 2018.

This article was written by Wong Oi Shan, for No Average Joe.