Architects of the West Kingdom. What’s it about?

Architects of the West Kingdom is set at the end of the Carolingian Empire, circa 850 AD. As royal architects, players compete to impress their King and maintain their noble status by constructing various landmarks throughout his newly appointed domain. Players will need to collect raw materials, hire apprentices and keep a watchful eye on their workforce. These are treacherous times. Rival architects will stop at nothing to slow your progress. Will you remain virtuous, or be found in the company of thieves and black marketeers?

Architects of the West Kingdom is the first part of a new trilogy of games from Shem Phillips, the designer of the awesome North Sea Trilogy of games. It offers a unique take on the classic worker placement genre and mixes in building and resource management. Let’s crack it open!

Quite a bit! As usual, Garphill Games crams a lot of fantastic components into their small boxes!

The aim of Architects of the West Kingdom is to have – you guessed it – the most victory points at the end of the game. How do you get these wonderful points? Building stuff! You need to collect resources and hire apprentices in order to build buildings. This is done in the usual worker placement style. Place a worker. Get the reward. The twist here though is that each player starts with 20 workers. Each time you place a worker at the same space, the amount of resources you collect goes up. So as an example, if we had three workers in the forest and we placed a fourth worker we would get four wood instead of just one.

As the areas begin to fill up with workers and players begin to reap the rewards with large amounts of resources, there is only one thing players can do to stop their opponents. Call in a mob to round them up. Yes, in this game you can place a worker, spend some money and capture your opponent’s workers and sell them to the prison. Easy money. That player will then need to waste a turn getting them out. You can even capture your own workers. In fact, this is a must as this mechanic is the only way to get your workers back in order to use them again. 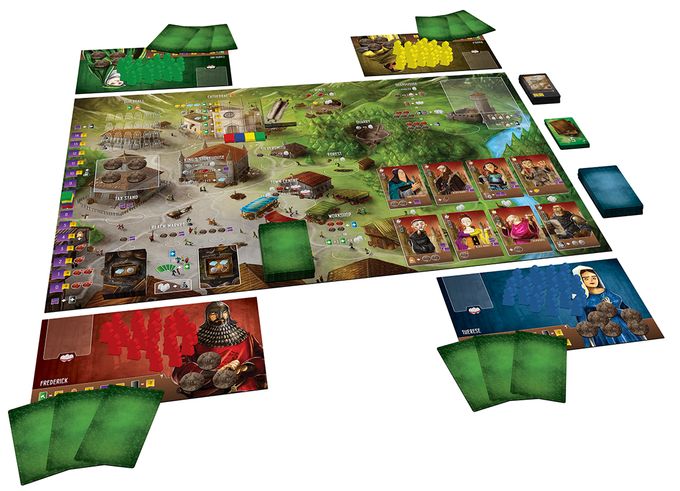 Let’s take a quick look at all the spaces available on the board and what they do and not just the couple we mentioned above.

These are the 4 main resource gathering locations. When placing Workers at 1 of these locations, players will gain the indicated resource. How much they gain is determined by the number of their own Workers present, after placing 1 there.

This location allows players to take up to 1 action for each Worker they have there. The available actions are to trade any 2 resources (Clay, Wood or Stone) for 1 Virtue, or any 3 resources (Wood or Stone) for 1 Marble. There are also several Apprentices who will allow their owner to take further actions here. Players may take the same action multiple times if they choose.

The Workshop allows players to either hire 1 Apprentice or work on new Building Plans.

The Town Centre allows players to recruit locals to capture Workers from any of the “large open circle” locations on the Main Board. For each Worker a player has at the Town Centre, they may spend 1 Silver to capture 1 group of Workers (of a single colour) from 1 location (up to 2 locations for 2-3 player and solo games).

This location allows players to take all the Silver from above the Tax Stand and place it into their own supply. However, this will cause them to lose 2 Virtue. Players are not allowed to place a Worker here if there is no Tax to steal.

While some believe in honourable, hard work, others will gladly take a shortcut to get ahead. The Black Market has 3 spaces for players to place a Worker. Each space is paired with an action below it. Once a Worker is placed on a space, no other Workers may be placed there.

This location allows players to take 1 action for each Worker they have there. The available actions players can take are:

Let’s talk about Virtue. On the side of the board, there is a Virtue track that tracks all the good and bad things you do. How does this change? To increase your Virtue you need to hire good people, contribute to the Cathedral and stay away from the Black Market. The higher up on the track, the more victory points you will get at the end of the game. However, at a certain point, you will not be able to visit the Black Market. Your Virtue is too strong. On the flipside, if you hire bad workers that cut corners, visit the black market and steal from the Tax Stand, your Virtue will drop. The further you drop down the track the more victory points will be deducted off your score at the end of the game. You will also not be able to contribute to the Cathedral. Such a bad person. The one good point of being low on Virtue is you get a tax deduction. Yes, you start avoiding paying tax.

In Architects of the West Kingdom when payment is made for certain things, part of that payment is tax and will be placed in the Tax Stand. So if you are low on Virtue, everything becomes cheaper for you. Players can steal from the Tax Stand whenever they want but for a hefty Virtue loss. It’s a great little mechanic that sees players waiting each other out to see if they can grab the most money. The Virtue track really brings out the ‘shall I be good or bad’ mechanic in the game. Lot’s of fun!

Finally, when you build a building or contributing to the Cathedral, you place your worker at the Guildhall face down in a space there. This worker is gone for good. Building basically acts as the timer for the game. Depending on the number of players, once the Guildhall location is full, the endgame triggers.

As with all Garphill Games titles, the components are fantastic. The card and board art fit the theme well and all the resource tokens are superb. The art of Mihajlo Dimitrievski is very distinctive and works well here just as it did in the North Sea Trilogy. The metal coins are also a nice touch. The quality and thickness of the cards are also great and the only minus point is that the two main card decks don’t have art on the back. They are just a generic blue and green colour. Other than that, this is all top notch stuff. Nothing else to say.

Architects of the West Kingdom is great worker placement game with lots of interesting mechanics. The large pool of workers available to you at the start, the Virtue track, taxation and the ability to arrest your opponent’s workers all make this a refreshing take on the worker placement game. With variable setup, each game can be wildly different. The player boards are double-sided and on the reverse of each board there is a variable setup for each character and they also get a special ability These range from staring with 10 workers in prison to starting near the top of the Virtue track. Abilities range from getting workers out of prison for free to getting tax deductions. With 10 different characters to choose from, there is a lot of replayability here.

There is also a solo mode where you take on an opponent via an automa deck of cards. It’s pretty good. The deck tells you where to place a worker and then take a certain reward. The deck controlled opponent will never build or hire workers. Its aim is to stockpile marble which it gets one victory point for each. It’s also a fun way to learn the game too. Good stuff!

We’ve had a lot of fun so far with this game and we can see it getting to the table for many more plays. It accommodates 1 to 5 players and it gets pretty cutthroat at the higher player counts which is always funny with our gaming group.

Architects of the West Kingdom was backed on Kickstarter. The regular retail version from Renegade Games is due to be released this week. 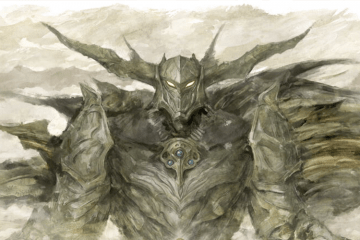