Full disclosure – I am not the biggest fighting game fan. Street Fighter, Tekken, Dead or Alive, even Super Smash Bros. never piqued my interest, despite each offering a character roster filled with good memories from great games. Then you have NetherRealm, the house of Mortal Kombat, Injustice: Gods Among Us, and now, Injustice 2.

Since 2011, the Mortal Kombat series has been getting better, but as a fan of DC comics, my natural affinity for the Injustice series made me obsess over the superhero brawler like no other fighting game ever. The first game was a gem and thankfully, Injustice 2 is everything I could have hoped for – a deep, intense, and ultimately refined experience that caters to both the hardcore fans, as well as being extremely welcoming to newcomers to the genre. Injustice 2 is the whole package, it is simply the best fighting game in recent memory. 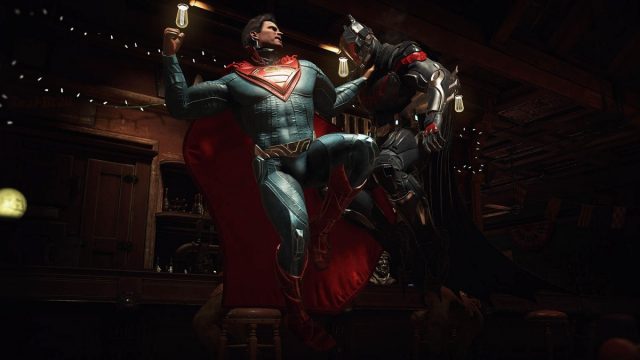 If you have just entered this parallel universe, it is one where Superman has killed the Joker, after the Clown Prince Of Crime tricked the Man Of Steel into killing Lois Lane and their unborn child. Kal-El turns into a world conqueror and the only force that stands in his way is his former friend, Batman.

One of the most prominent features of Injustice 2 (and its comic counterpart) is that the story plays such an integral role throughout the singleplayer portion. If you have read the comics, your experience will only be more enriched by the dialogue and interactions between a roster of almost 30 unique fighters. That said, the campaign does not lose any of its impact when played on its own, as the motif of good (Batman) vs evil (Superman) is as old as time. In this sequel, Superman has been defeated but it throws in an invasion by Brainiac as a secondary adversary, and you can already see how it will eventually play out. It is definitely an enjoyable ride all the way through and helped by the brilliant animation work.

Cut-scenes are wonderfully acted out, with spot-on voiceovers, and this can only bode well for future entries as such exceptional animation work draws players into the overarching narrative, The graphics portray these on-screen avatars as beings of depth and emotion, rather than colourful caricatures. It is also evident during gameplay, with every move carrying weight and packing a punch. The intricate way the story is woven also aids in how Injustice 2 introduces you to the various players, and how they fight in the high-stakes arena of world domination. The villains, however, get the short end of the stick, as they appear mostly as foes rather than controllable fighters during the campaign. 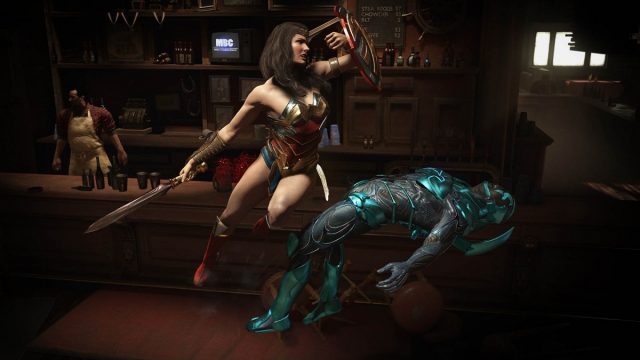 Speaking of the roster, familiar faces will greet series veterans. The Flash, Wonder Woman, Batman, Cyborg, you name them and they all make their returns. The sequel serves up some unlikely additions, including comic book fan favourites Swamp Thing, Captain Cold, and even Red Lantern Atrocitus and his trusty space cat, Dex-Starr, make their debut.

It is a roster filled with unique fighters with their own styles and traits, which can easily change up a fight if you know their moves well enough. Unlike other fighting games, one key element in the series is the ability to interact with the environment, but in ways unique to a character. Superman might use his strength to topple a statue onto his foe, whereas The Flash will use his agility to manoeuvre away from trouble – adding another strategic layer to an already dense fighting game.

Fighting games are full of combos, and Injustice 2’s combos are easy to learn and pull off. However, like all great fighting titles, to master them is a whole other level altogether. Timing remains key, and it is this defining trait that separates the pros from the casual player. Yet, you can still pull out your character’s Super Move with just two buttons even if you are new to the game, and combos remain a variation of almost universal or standardised inputs.

Anyone can become good at Injustice 2, as it just takes time and effort, and I absolutely love it. Dig deeper and you will find moves like Meter Burns that transform normal combos into a chain, or even Clashes, a move that requires you to gamble your Super meter in a strategic mind game in order to get a leg up on your opponent. The tutorials do enough to arm you with the foundations, but alas, there is no better way to learn than to keep fighting, be it against the AI, or more essentially, other human players. 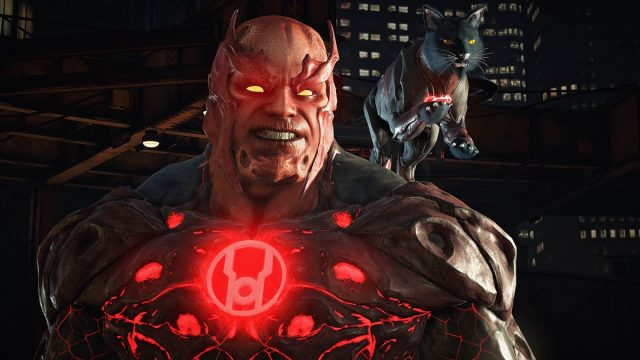 The Multiverse is a ripe learning ground, and serves as a game mode that adds in random modifiers that force you to adapt and learn about the various characters. Fancy fighting an opponent while having random ice missiles freeze you? Or how about your TV screen black-out every few seconds? These myriads of modifiers provide some of the best opportunities to study all the fighters under different conditions that round you out with better overall skills.

Fighting in the Multiverse also rewards you with one of the more controversial additions to Injustice 2 – loot! For better or for worse, you can earn gear, currency, shaders and more that help shape your game, with the bulk of them coming from Mother Boxes. These blind boxes reward you with drops of different rarity, and can be obtained by completing feats or getting past certain thresholds in the various modes of Injustice 2.

This would have been a really big problem if the competitive play came down to whichever player has the best gear, but NetherRealm has deftly sidestepped this conundrum. Ranked matches will never factor in gear bonuses, and even unranked matches online will require both players to agree, before the game adds in the bonuses. This ensures parity amongst the competitive space but retains your ability to express yourself and your character creatively, through gear choices and custom looks.

One curious addition is the AI Battle Simulator, which is great for anyone who wants to test the online circuit without necessarily mastering a fighter. Simply choose a team of three fighters, outfit them, and let the AI fight for you against other teams. You can even have the fights be sped up to four times the normal speed for a hilarious viewing. It even works offline, as other players will be able to fight your assembled team, and every win or loss will reward you with Mother Boxes every now and then. 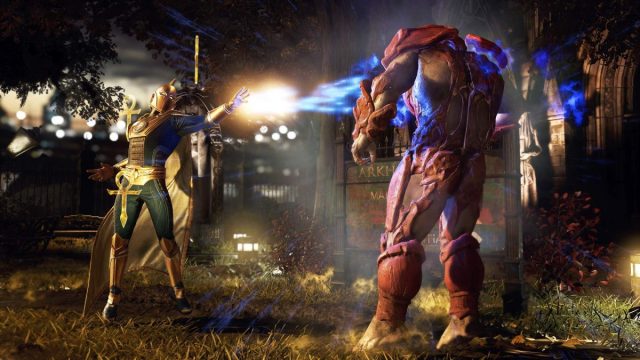 With five slots for gear, two level-gated ability slots that change how a fighter does a certain thing, as well as colour shaders, the game offers a deep pool of gear to collect. It is definitely a rewarding experience to finally find the perfect look for your character, together with the right bonuses. If you’re going to wear spandex, you want to look good while kicking the crap out of an opponent.

Currency in Injustice 2 has two basic uses, either to get more gear (credits, guild credits, regen coins) or to manipulate the levelling system and transmogrification of items/skins (source crystals). The various currencies are all easily earned, with the exception of source crystals. You are most certainly not forced to buy them, but the temptation is real, especially in the later scenarios, where the desire to power up can warp your sense of logic and skilful play.

With a great cast of fighters, AI battles, local and online modes, an ever changing and challenging Multiverse, and a magnificent campaign, Injustice 2 simply dominates the competition. It gives you the keys to the kingdom but also lends you a helping hand in mastering the characters and testing them out, without being overly repetitive and complicated. Add in the seemingly endless customization options with gear, and it makes for a cycle of fun that can draw you in for hours on end.

9.8
The new King of the Hill, Injustice 2 simply powers past any of its unworthy opponents, setting a high bar that perhaps none can reach. This is the premier fighting game for this generation of consoles, and one you will enjoy mastering.
Gameplay– 10.0
Story– 9.0
Presentation– 10.0
Value– 10.0
Tags:BatmanDC comicsInjustice 2SupermanWB

Creator of "60 Seconds!" explains why it’s so hard to get a good ending 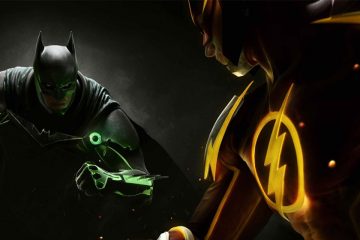 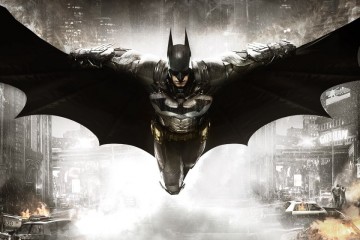 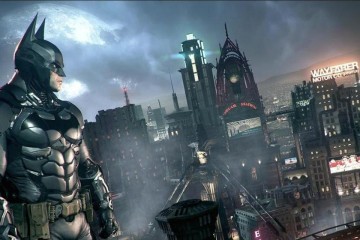