“Oh, Death. Won’t you spare me over ’til another year”

Man of Medan is the first game in Supermassive Games horror anthology ‘The Dark Pictures‘, an ambitious eight game series that will have two games released per year over the next four years. Interesting stuff for sure.

For those who have played Until Dawn you’re in very familiar territory. You take control of several characters throughout the game and then try to get them to survive until the end. When you first start the game you are presented with three options on how to play. Solo, Movie Night and Shared Story. Movie Night is the most interesting as it takes the way people used to play Until Dawn in groups and makes it an actual mode. Each player selects a character and then the controller is passed around to a player when their character appears. The tension in this mode is ramped up to the max as you are sat by the wayside with no input on what is going on. You just suffer in the corner as you watch your friends mess things up badly (or do some amazing things…possibly). 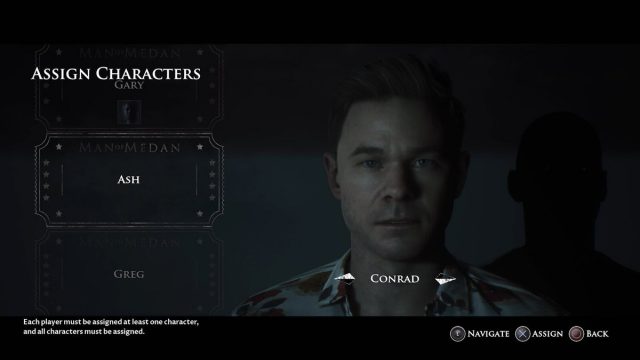 Shared Story is the co-op mode where two players play the story together controlling two characters and will experience the story from different perspectives, even if they are in the same room together! The joys of supernatural storytelling…

With Until Dawn, the atmosphere was of isolation. Stuck in a cabin in the woods with unseen forces at play. With Man of Medan, the atmosphere is of isolation. Stuck on a ship with unseen forces at play. Now we are not saying this is a bad thing but for the first game of a new eight game series, it sure does feel like Until Dawn: Part II.

With that, we have the usual horror movie cast of characters that are just annoying enough that you wouldn’t mind seeing them die a horrible death. There is the arrogant Conrad, the nerd Brad, the cool as ice Alex, the super annoying girlfriend Julia and finally the oh so mysterious Captain Fliss. An interesting bunch for sure but no where near as well written or fleshed out as the characters in Until Dawn. In fact, the whole of the writing has taken a step down from Until Dawn which is sad. Hopefully it will improve as the anthology progresses. 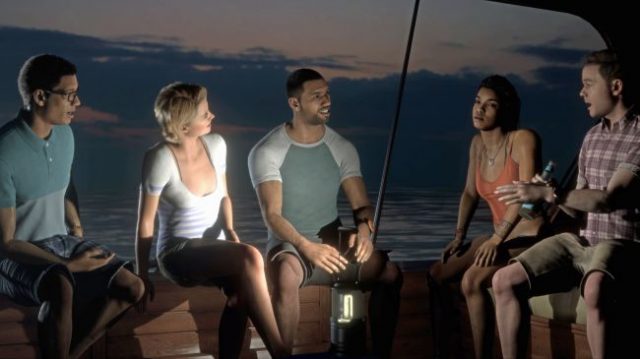 The are quite a few game play features that are ported over from Until Dawn to Man of Medan also. The Butterfly Effect is now called ‘Bearings’. This feature allows players to see the greater picture of the choices they make. Players will again choose dialogue options, this time via a moral compass which will change the relationships status with characters you are talking to depending on what options you choose. Totems are also back, this time they are…pictures. Collect these and they will give players premonitions on upcoming events.

The performance on this game is horrible. Frame rate is all over the place and can drop to unplayable levels, this is especially troublesome if it drops while you are attempting one of the rhythm mini games. Loading screens pop up unexpectedly in places and break up the lovingly crafted atmosphere of the game. Sound regularly gets out of sync also and only a reset of the game will get to back to normal. In our play though, the game also froze numerous times and progress was lost.

Graphically the game is great, character renders and cut scenes are well done. It looks like a glossy big budget movie but the voice acting is a mixed bag though. Some of it great and some of it not. More B movie than A list. 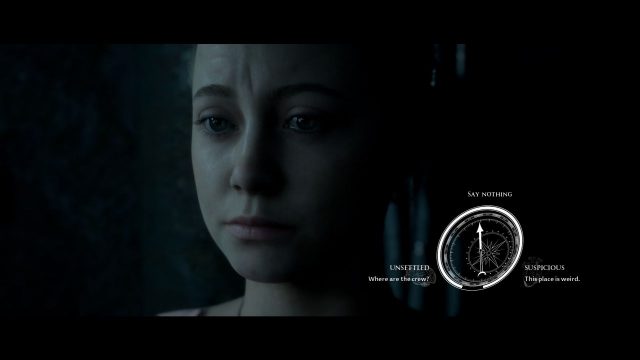 If you liked Until Dawn you will probably love this too but you will come away with a feeling of it could have been so much better. Until Dawn is the better game but that was a complete game. Man of Medan is just getting started. Hopefully, things will get better over the next seven games and also offer up better writing and make the series stand on it’s own rather than be Until Dawn: Part VI in a few years.

Man of Medan was reviewed on a PlayStation 4 Pro with a review code provided by the publisher.

7.0
As the first game in an eight game anthology, Man of Medan works even though it's bogged down by technical difficulties. As a follow up to Until Dawn though, it definitely disappoints.
SCORE – 7.0
Tags:GameStart 2019HorrorPCPS4ReviewXbox One