When the Nintendo Switch was first released in 2017, most gamers were stuck with the two Joy-Cons that it came with when it came to playing games in docked mode. There was the option of getting a Nintendo Switch Pro Controller, but that usually came at a premium. Even now, the Pro Controller is one of the more pricey options for docked gaming on the Switch.

Inevitably, third-party manufacturers came to the fray, offering gamers various controller options to suit their needs. Recently, PowerA released its latest collection of Pro-style Switch controllers amid the host of third-party models that are rooting for a place at your average Nintendo Switch enjoyer’s tabletop.

Though both are designed for the Nintendo Switch, they each cater to different crowds. As their names suggest, the Spectra Enhanced (S$54.90 RRP) is the wired variant, and would naturally be the more affordable option for Switch gamers who like a more traditional setup of hooking up their controllers to the console. The Fusion Pro (S$159.90 RRP), on the other hand, is the wireless controller that comes with an additional set of programmable paddles on the back, as well as a selection of interchangeable parts, designed for a more premium, bespoke and seamless gaming experience. 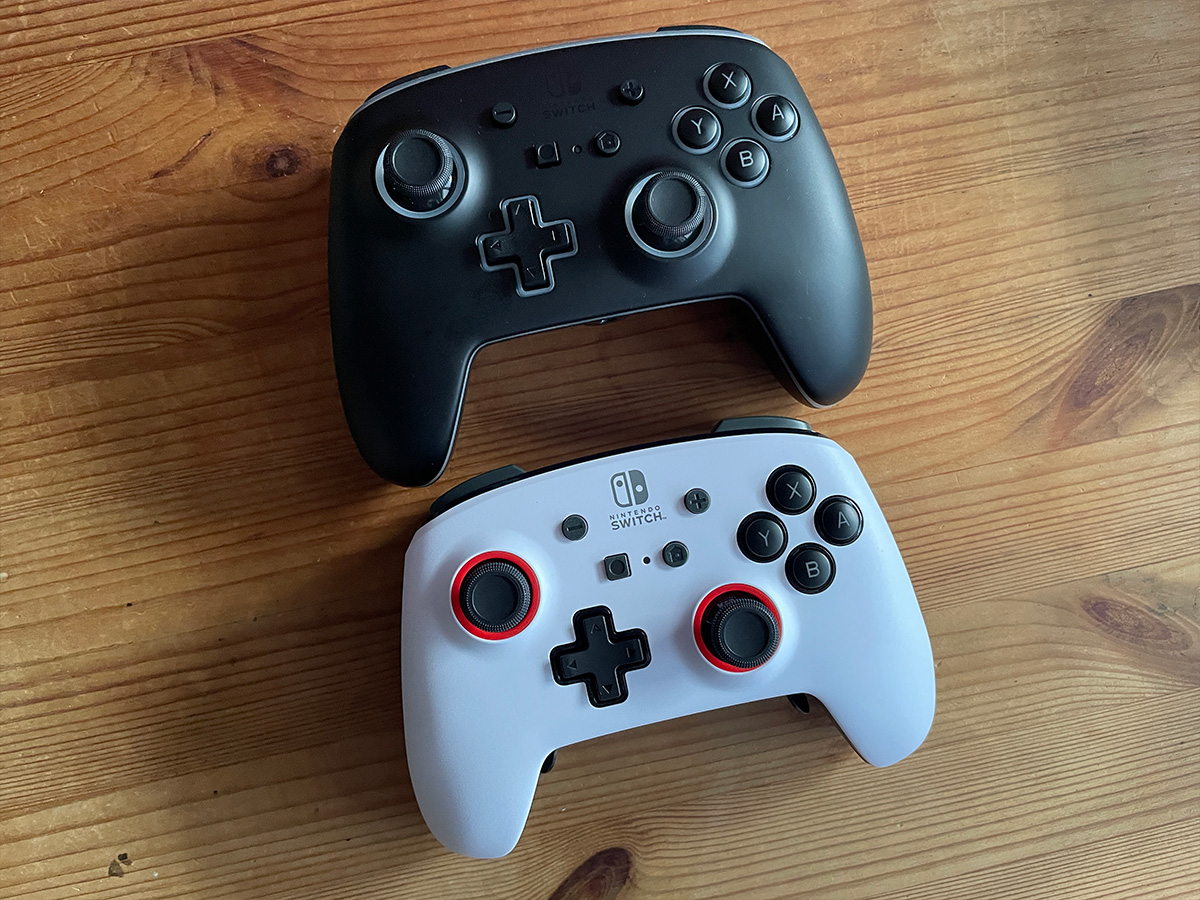 At first glance, one could immediately dismiss the PowerA Spectra Enhanced as a lower-tier controller. While that may be true as it doesn’t really offer much in terms of customisability (though it has programmable buttons on the underside) and utility, its price point is quite attractive if you’re looking for something a bit more entry-level. 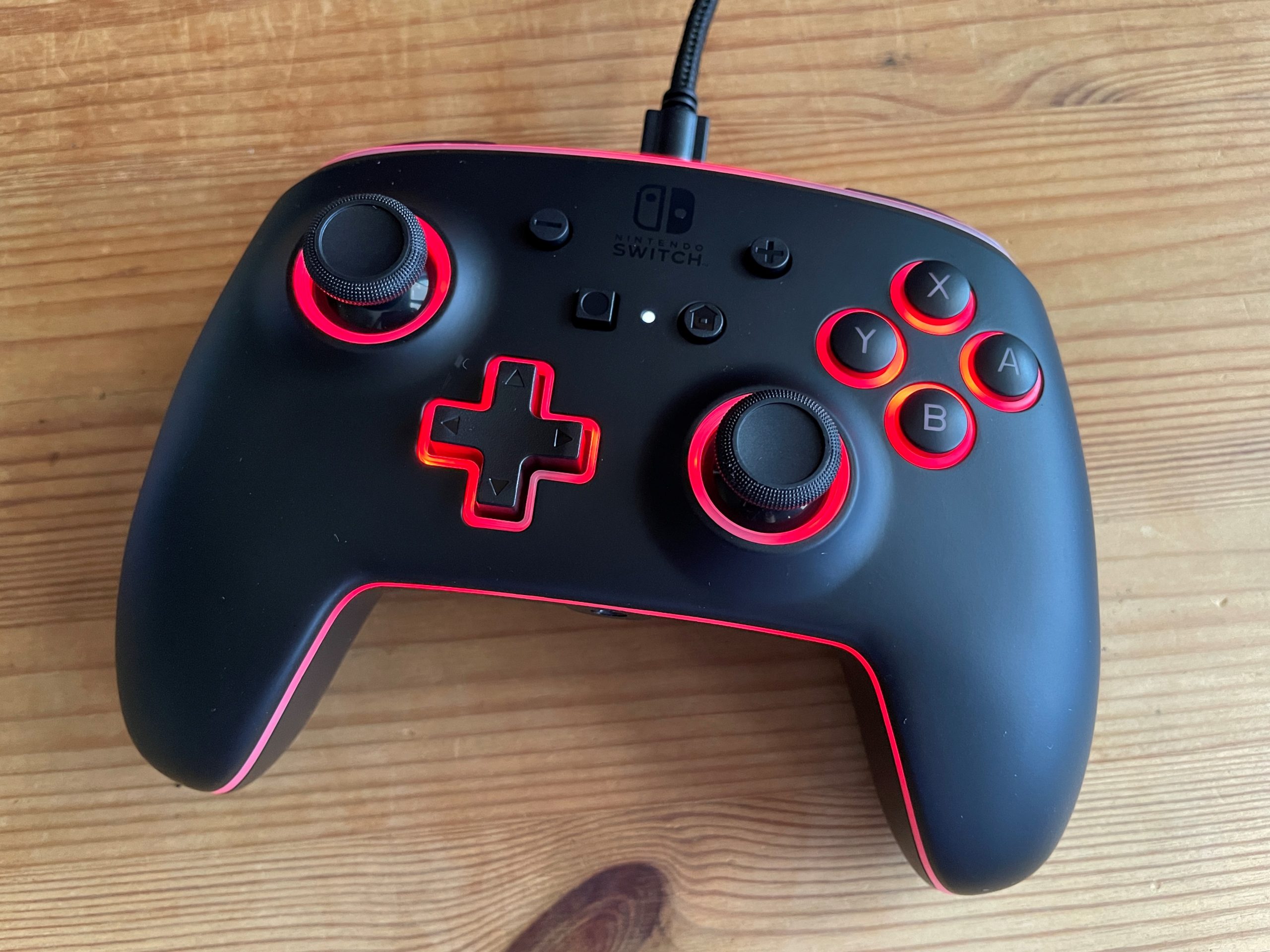 Right out of the box, it comes with just the controller, and a detachable 3m (10ft) USB cable that you’ll be hooking up to the controller and your Switch. I particularly like the build of the USB cable as it’s wound with a rope cord, and the part that connects to the controller comes with a catch that fastens it into place, preventing any accidental disconnection should one trip on it or jerk it away by accident. That said, it takes some effort to remove as it latches onto the controller rather tightly, should you ever want to travel with it. Speaking of which, it lacks a travel case unlike the Fusion Pro model, so you’ll want to purchase one separately to be able to use it on the go.

Holding the Spectra Enhanced, you already get the sense that it is made with a lightweight plastic material that is befitting of a more entry-level controller. That said, the controller feels great on hand as it doesn’t weigh you down so you can focus on the gaming itself. Its shape was clearly designed to be an ergonomic fit for most hand sizes. With my experience of using it, I never once felt like my hands would cramp any time soon. Mind you, I don’t have the biggest hands on the planet, and this controller isn’t the bulkiest one out there either, so I imagine this would be a good fit for most folks. \

A 35mm audio jack is present for your acute listening needs, which already makes it a more attractive alternative to the Nintendo Switch Pro Controller, which is priced at $99.90 but lacks one. Another really cool feature of the Spectra Enhanced is the presence of LED backlighting. With the press of a button at the back of the controller, you can cycle between eight different colour schemes to give your gaming setup that extra touch of immersion. 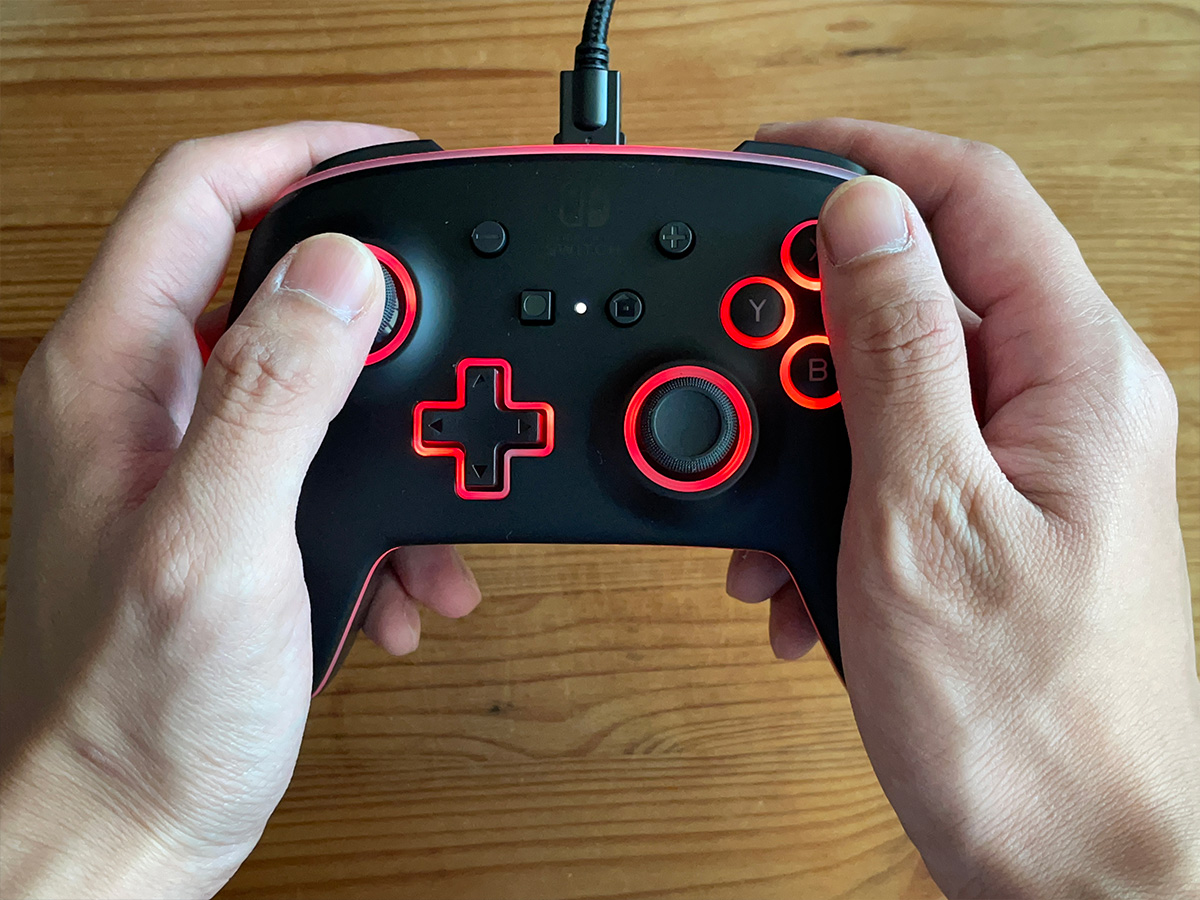 However, don’t expect any extra bells and whistles, such as the ability to customise the brightness, hue, or even program lighting behaviour, as those things would require an app on a phone or PC to do so, which this model lacks. Interestingly, this model gets the lighting and not the more premium Fusion Pro, but I imagine this might appeal more to gamers who want a little bit of ambience and/or some way to easily look at their controller’s button configuration in a dimly-lit setting.

While the lighting is a cool feature to have for the sake of immersion, a strange omission on the Spectra Enhanced is the rumble feature, which has been a staple in the base Nintendo Switch Joy-Cons as well as the Pro Controller.

The ABXY buttons and D-pad all feel smooth to the touch and press with a satisfying click, while the analog sticks have a good little bit of tension that allows you to control movement with precision when playing games like Pokémon Scarlet and Hades that rely a lot on one or both sticks for movement. There are also two programmable buttons at the back that can act as shortcuts for combination button presses for those hard-to-reach button combos that many fighting games require you to pull off. 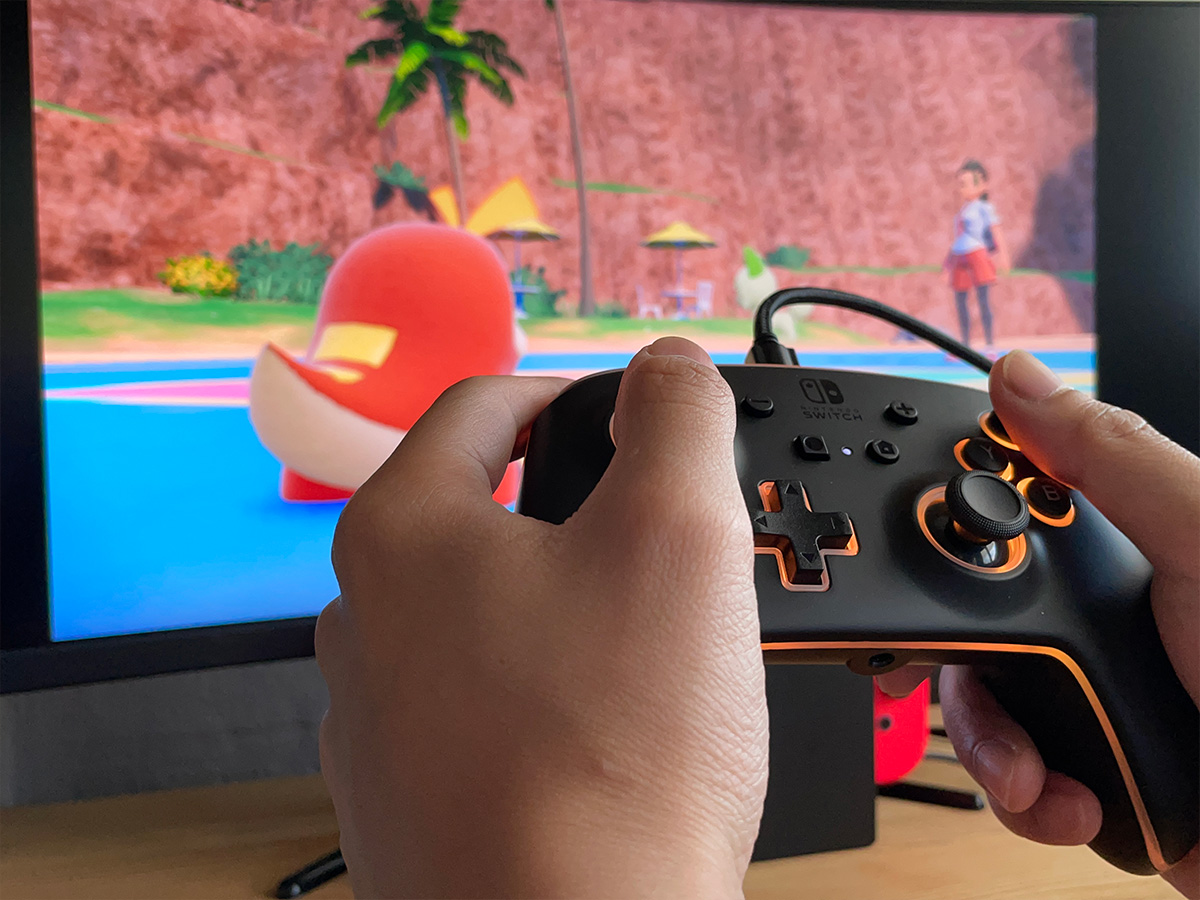 Granted, since only two buttons are present, you definitely won’t get too much flexibility out of it. I found myself forgetting that the buttons even existed since I don’t particularly play fighting games or shooters that much on my Switch system. That said, I imagine someone who plays the likes of Super Smash Bros. Ultimate (the more hardcore ones, really), Overwatch 2 or Fortnite will get more mileage out of this feature, especially so for the latter if you want to avoid ending up in the infamous claw grip, where your thumbs and fingers are working simultaneously in an awkward position to get the job done. But then again, if you’re a hardcore fighting game player, you might as well be better off forking out an extra S$100 for the more customisable Fusion Pro controller.

What I would say is the biggest downside of this controller is the matte finish. While it makes the controller feel really smooth and even premium to the touch, it has the inherent problem of being a fingerprint magnet, which, over the past few months of using it, has become notoriously difficult to clean.

The PowerA Fusion Pro Wireless Controller, on the other hand, offers a much more premium experience right off the bat. From the box, you get the controller, an alternate colour faceplate, an alternate set of analog sticks (convex instead of the default concave ones), and a detachable USB cable for charging the controller when you’ve exhausted the controller’s 20-hour battery life. All of this fits snugly into the handy yet durable travel case that the controller comes with. 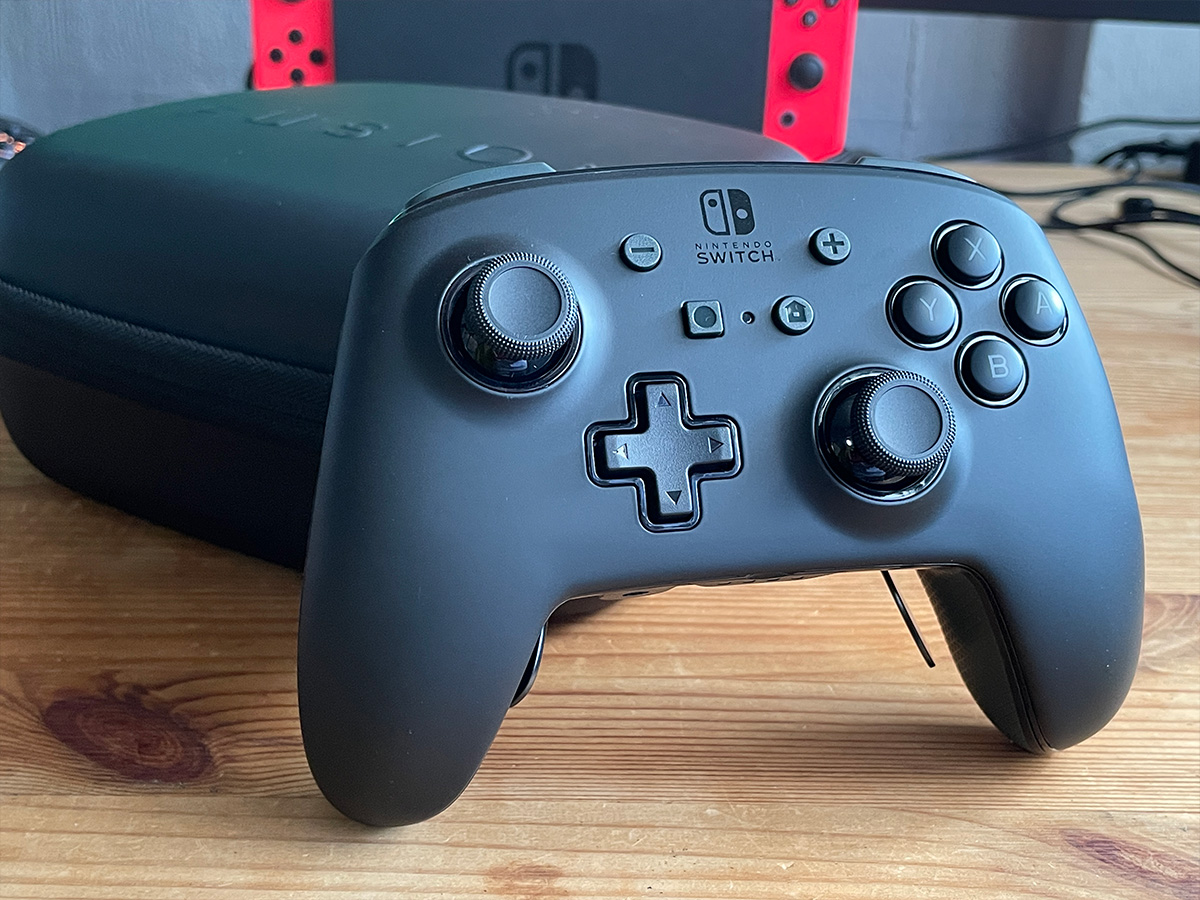 Right off the bat, the Fusion Pro is a significant step up in the quality of its components. The plastic on the body, buttons, analog sticks and triggers feels more firm and comes with a smooth, matte finish. Unlike the Spectra Enhanced, the grips are textured with miniature perforations that aid in maintaining your hold on the controller and preventing any slippage during those long, drawn-out sessions of Smash or Dragon Ball FighterZ. For added longevity, holes encasing the analog sticks are lined with a layer of rubber to prevent the stem from breaking after prolonged use. A 3.5mm audio hack exists in between the trigger buttons – again another reason to get it over the Nintendo Switch Pro.

All in all, the Fusion Pro just screams quality. If I had to nitpick on its build, however, it would be that the controller is quite bulky and rather hefty due to the additional paddles on the back, so it might be quite unwieldy for those with smaller hands as a result. Moreover, the black faceplate is also another fingerprint magnet, despite how sexy it looks. That is partially why I decided to swap it out for the white faceplate – again another testament to the customisability of this controller.

If you primarily play fighting games, shooters and battle royales, or even RPGs with much more complex control schemes like Monster Hunter Rise or Dragon’s Dogma: Dark Arisen, you might have even more reason to get the Fusion Pro simply for the fact that it has four programmable paddles on the underside. Each individual paddle can even be removed with a simple twist and lift mechanism and can snap back on with ease whenever you need them again. If you absolutely don’t need the paddles (and maybe want to shave off a few grams from the controller’s weight), the entire thing can come off with a simple snap.

Like the additional buttons on the Spectra Enhanced, these can be programmed to activate certain button combinations that would otherwise be too complex to pull off with the standard controls, allowing you to add an entirely new dimension to your gaming experience. Also similar to the Spectra Enhanced controller, you need to press and hold the program button on the underside to map specific button combinations on each paddle.

While mapping buttons to the paddles aren’t inherently a complex task altogether, this process could easily have been made much easier by giving us the option of customising them via a PC or phone app. It only makes sense to have much more customisation on this controller be done on a PC or phone since I imagine most Switch owners these days would have at least one of the two devices readily accessible. Hopefully, PowerA can incorporate this into future versions of the Fusion Pro for the Switch. 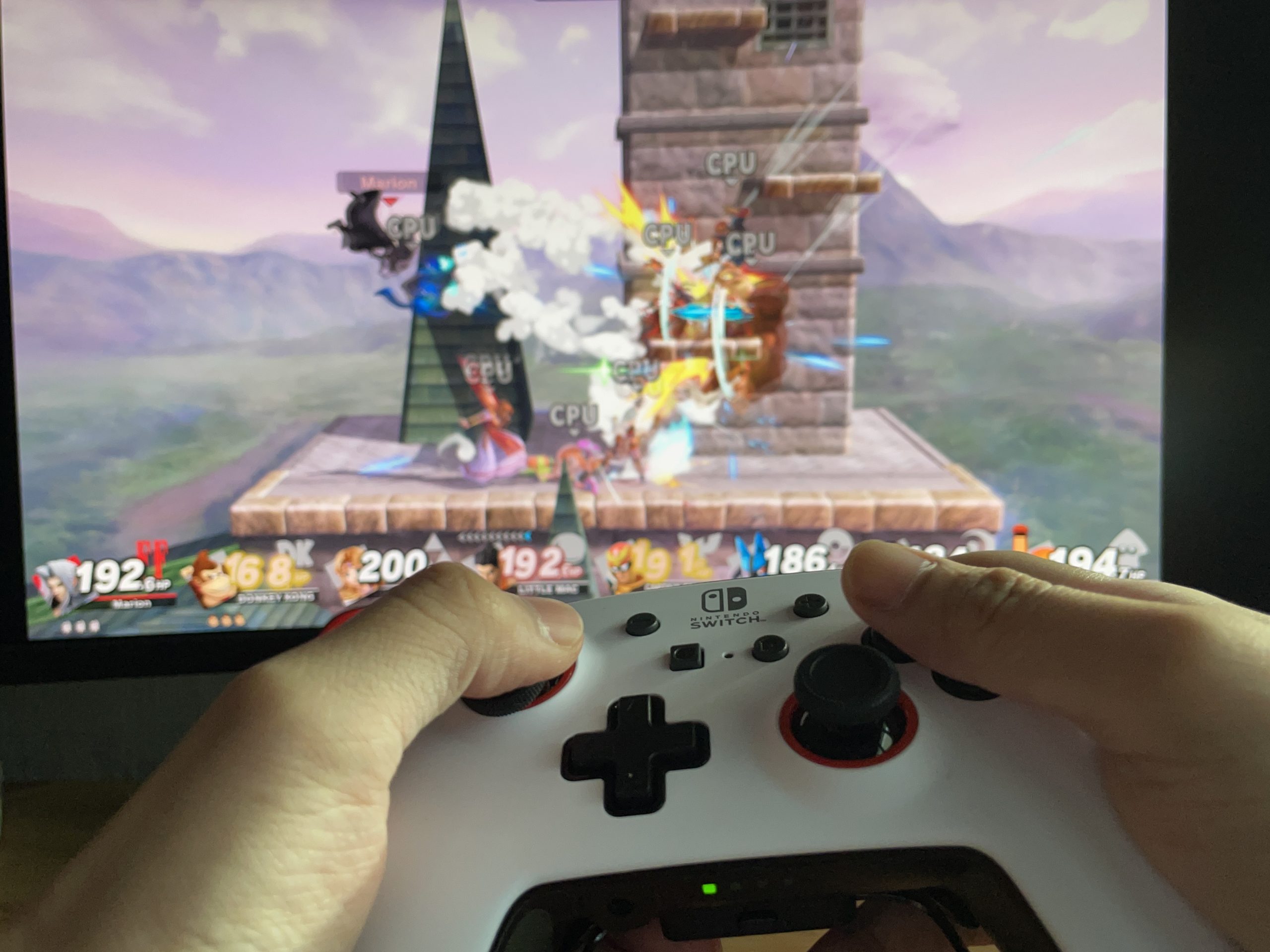 Unlike the Spectra Enhanced, the Fusion Pro doesn’t come with LED backlighting. While it’s not the most game-breaking option to omit from the controller, it could still have been quite useful to have if you were playing in low light and just wanted a convenient way to view your controls without having to reach for the room lights.

In a nutshell, the Power A Spectra Enhanced and Fusion Pro controllers offer very different options to players. The former is for players who want a great controller for their Switch without having to fork out $100 for one, and the latter is for those who want to have many options with which to customise their play experience available to them. 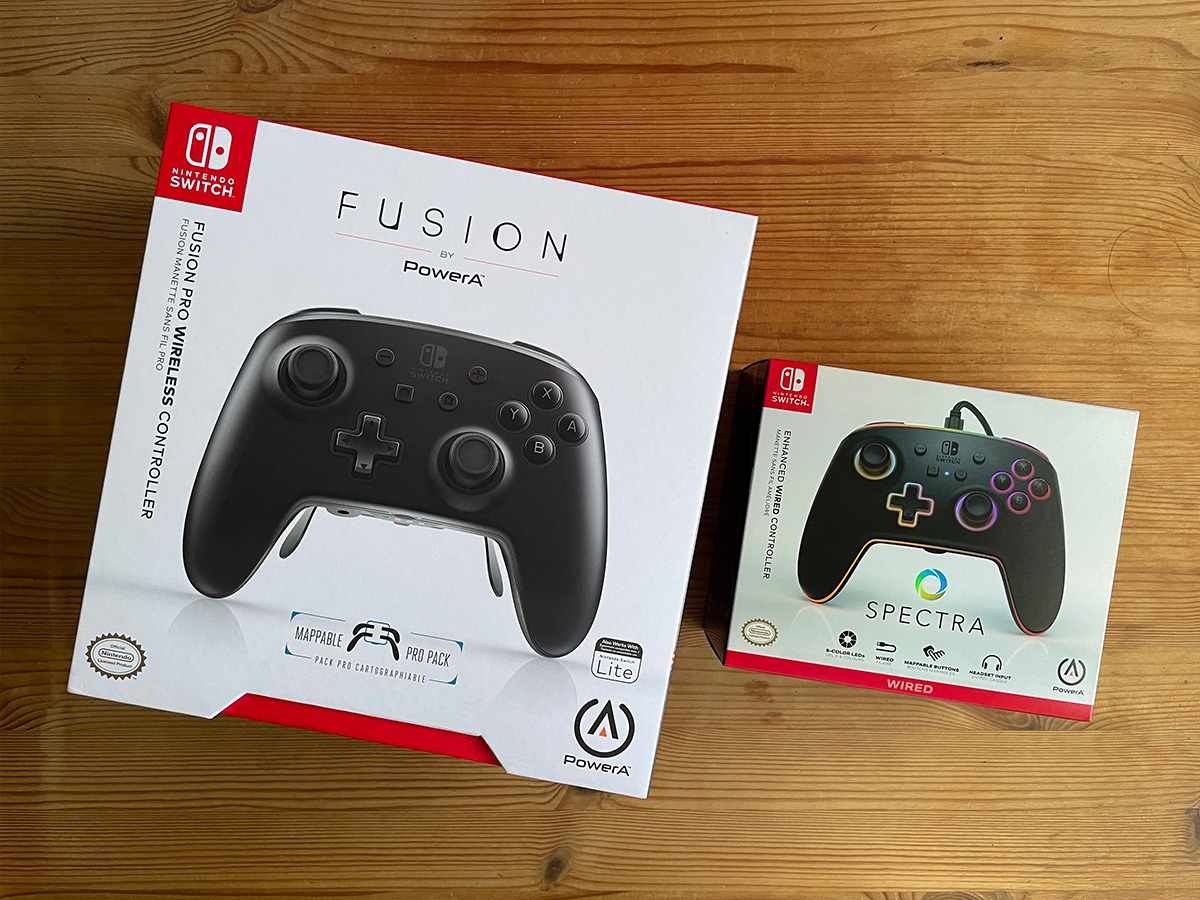 Granted, neither are perfect controllers, with both not having built-in rumble for that added bit of gaming immersion, or not having button mapping available via a PC or phone app. Personally, I would go with the Fusion Pro because I just prefer having a wireless setup. While I don’t see myself using the paddles a lot, I will still get lots of mileage out of the controller from just how well it is made. It just feels good to have a controller that is manufactured with such care, so I wouldn’t pass up such decent form factor in a third-party Switch controller.

In essence, as long as you know what you want in your controller, you wouldn’t go wrong with either of them in the long run.