1999. A very busy year. Pokemon fever hit the US. The Matrix came out. Tony Hawk landed the first 900. The Euro currency was created. The Y2K bug scare. Just to name a few. There was a lot going on for sure.

YIIK: A Post-Modern RPG starts in the summer of 1999. Our protagonist, Alex, has just returned home after graduating from college and his first task after reaching home is to go shopping for his mother. Like the good son he his, off he goes shopping list in hand. Walking around Frankton, everything is normal until you meet a cat. Who then steals your shopping list. What else is there to do but give chase? After following the cat to an abandoned factory on the edge of town you meet up with a girl called Semi Pak who immediately gets abducted by aliens. Then things get really weird…

Without spoiling the whole narrative, as you play through the game, Alex will stumble upon evidence of more missing people, a strange realm between two worlds and the impending destruction of Earth as the clock hits midnight on New Year’s Eve…It’s a rollercoaster of a story with many highs and unfortunately as many lows. But don’t let that put you off. It’s a great game.

If you have ever played Earthbound, you will know exactly what kind of story you are going to get and how you progress through it. The story is told seriously but the off the wall humour, geek references and surreal imagery are balanced well to form a solid story. There is a lot to like here. Early on in the game, you will be using the OMISIM message board to uncover the mysterious events happening around you. It’s a fantastic replica of a 90’s website and it features some of the best writing in the game. When you access the site there will be new posts, some will propel the story along while others are there to amuse you. Such as how people are super excited for a certain character in a huge movie that is coming up. Silly usernames and comments to the posts are also fun and often raise a chuckle as you play.

Characters are generally well written such as Claudio, Chondra and Vella. Where it takes a dive though is Alex. For some reason, Alex is super unlikeable and annoying. He comes across as a spoilt, pretentious brat which is not good for your main character. He also isn’t voiced that well. He constantly sounds bored and his inner monologues are usually cringe-worthy.  It’s a shame considered everybody else in the game is grounded, identifiable and fun to interact with. 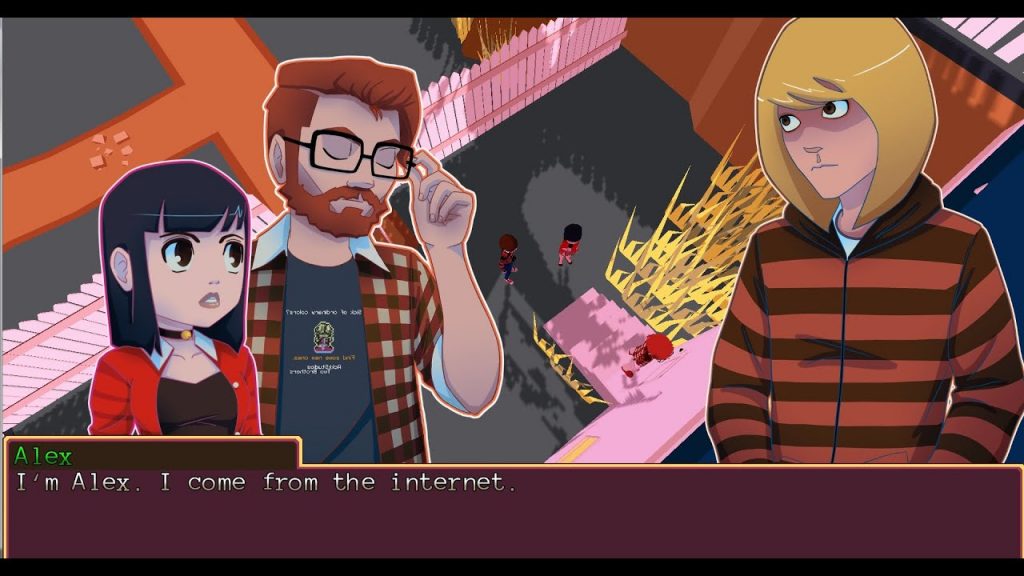 The combat in YIIK is the usual JRPG turn-based style we have come to love or loathe. Here, it’s pretty fun because of the mechanics. Each character has mini-games for their attacks. For example, early on, Alex has attacks based around throwing vinyl records –Shaun of the Dead– style at the enemies. When you attack, you need to scratch the vinyl back and forth and stop it in the sweet spot each time. The more times you can do it, the higher the attack. There are many attack mini-games and they bring a lot of fun to a usually dull system.

When you exit world hubs such as Frankton and the Abandoned Factory, you are transported to a world overview like Final Fantasy. Here you can move to various other locations but beware! Yes! Random battles! There are many dungeons scattered around the game world and as you investigate them you can acquire new abilities and objects. These dungeons are very well designed but offer nothing new between them. They may look different but there will be nothing different in the way you tackle them and that’s a little disappointing. 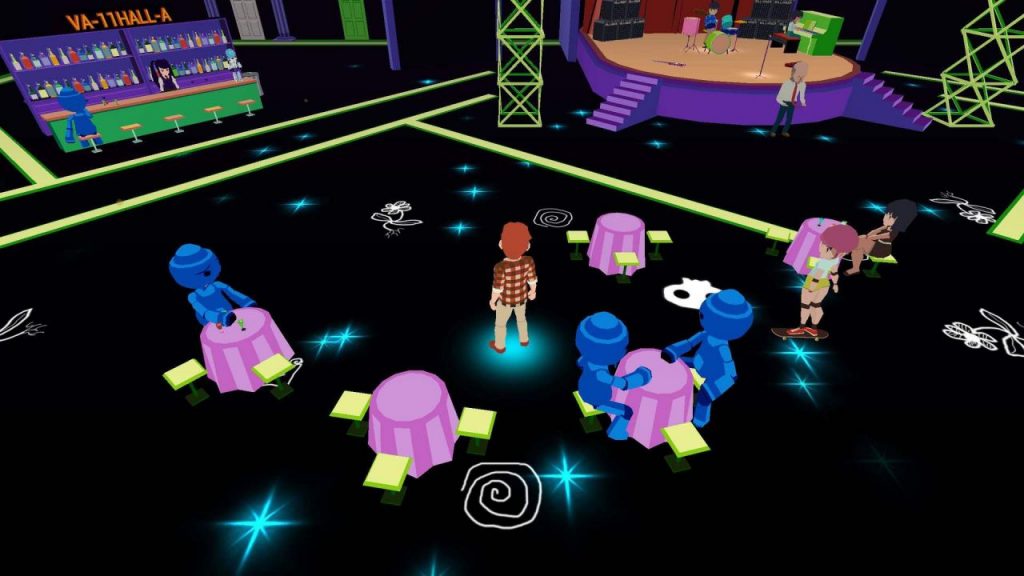 The biggest issue with the game at the moment (nothing a patch can’t fix) is the sluggishness of the game outside of combat. When you walk up to a character it can take two or three button presses for it to register. It’s the same with trying to pick up objects. Mash! Mash! Mash! It’s a little strange that this part of the game is like this because the combat is very, very responsive to button pressing. Another issue is the interface is a bit clunky. When you look at your inventory, there is no way to sort anything and couple this with when you select something and the button press lags, things can get frustrating.

YIIK is a wonderful looking game with a fairly unique looking design. It’s a collision of modern and retro that is super colourful and serves the game very well. The biggest highlight though is the soundtrack. It’s exceptional. We have Toby Fox (Undertale) to thank for that. It’s one of the most varied soundtracks to a game we’ve ever heard. Each boss battle has its own theme and they are amazing. You find yourself wanting to get to the next boss just to see how brilliant and ridiculous the theme is going to be.

Overall, YIIK: A Post-Modern RPG is a great experience that is slightly dragged down by a clunky interface and some terrible sluggishness. However, the story is engaging and the combat is fun enough to overlook these small faults. YIIK will appeal to many people. JRPG fans. Retro fans. Nostalgia fans. There is something there for everybody. The story lasts around 25 to 30 hours so it’s definitely value for money. We just hope the game soundtrack gets a vinyl release! 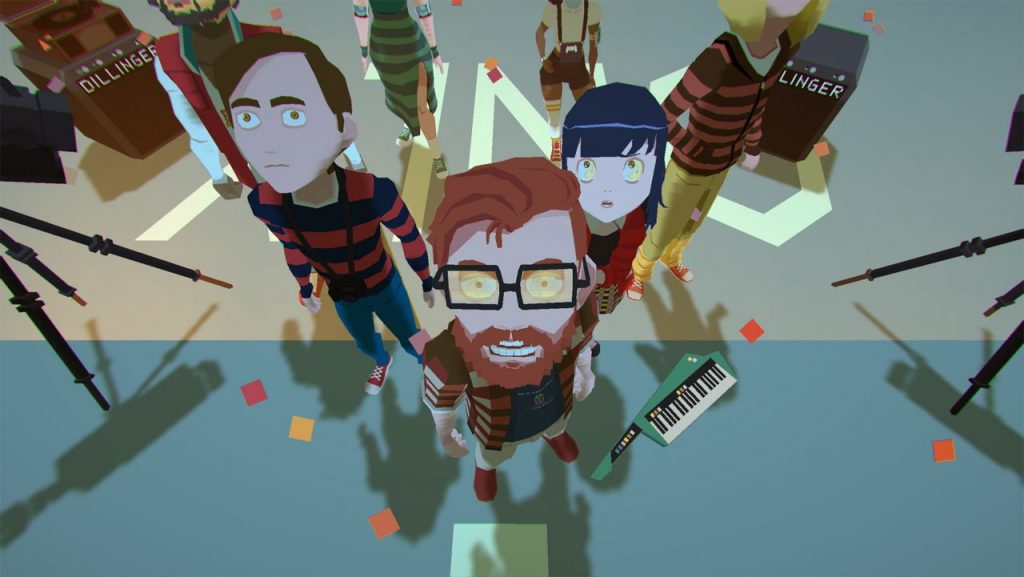 YIIK: A Post-Modern RPG was reviewed using a PlayStation 4 copy provided by the publisher.

7.5
A novel take on the JRPG genre with some great combat mechanics and an awesome soundtrack. The story is a little hit or miss and the game can be quite sluggish at times but don't let that turn you off. This is definitely worth your time.
Great! – 7.5
Tags:GameStart 2019Nintendo SwitchPCPS4RetroRetro GamesReviewXbox OneYIIK