Picture this scenario: you bring your friends along for some 2D Street Fighter IV action. What could have been a fun gaming night, ends up with your pals struggling with the controls and special move motions, along with a string of curses for failing basic fighting game inputs, PLUS over-enthusiastic joy when someone happens to pull off a special move out of sheer luck.

A frustrating scenario, right? Up until now, most 2D fighting games have special move learning curves that either make or break the spirit of a casual player interested in the genre. This makes them lean towards 3D fighting games and even the Smash Bros. series for some casual party fun.

Rising Thunder, an upcoming PC 2D fighting game that takes a page from Real Steel but amps up the fighting by the buttload, lowers that barrier further with the Loadout system. Here, players can choose which of the three special moves -alpha, beta, gamma- they can use pre-fight. 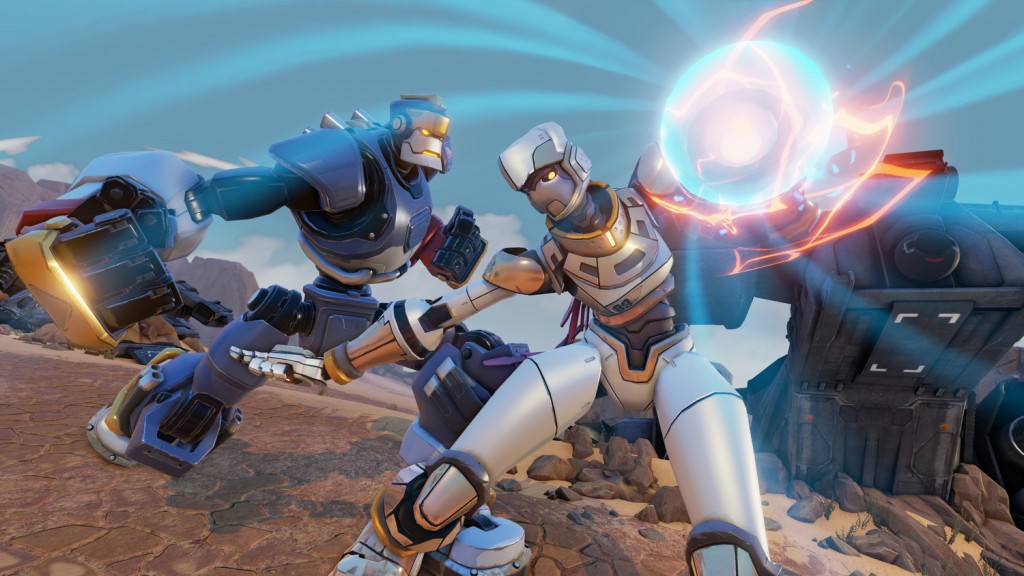 There are no quarter circle motions or half-circle gestures needed here; short of the usual forward+medium for an overhead or unique attack, you pull off your special moves with just a press of the button. The catch is that each move has its own cooldown timer so you can’t spam most of the high-powered and high-priority ones at will.

This adds a lot to an established mechanic.The controls are a breeze to get into thanks to the above button layout and how right it feels just maneuvering each bot and pulling off their attacks. It’s close in line with top tier fighters like Street Fighter IV or Killer Instinct (2013)

New players don’t need to worry about the aforementioned complex control schemes and just focus on the metagame. They don’t have to fret about messing up their execution mid-combo (just mind the button presses instead) and concentrate on the more important tools of a 2D fighting game: space control and the art of footsies and zoning. 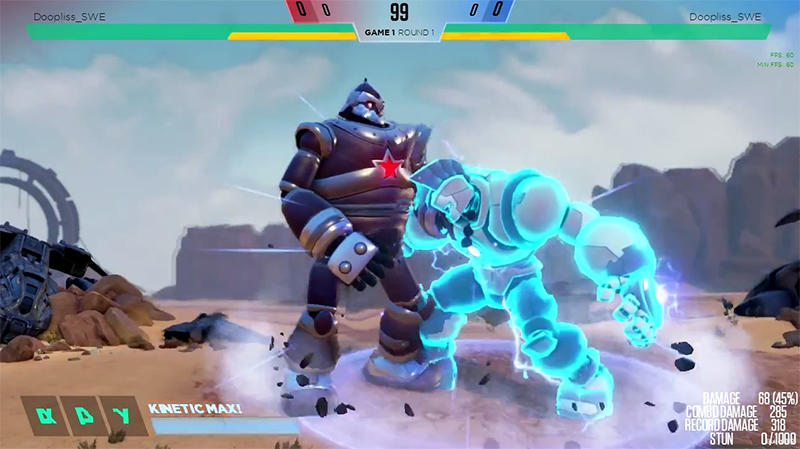 Professional fighting game gurus: you aren’t left out as there are a solid number of mechanics and familiar tropes that will intrigue you. Players can also choose whether to take the offensive stance with Kinetic Advance mode or play defensively with Kinectic Deflect mode. The former lets you cancel certain moves to other special moves, or just canceling to a dash or backdash in case your special move is blocked. The latter mode lets you use half of your Kinetic meter to push away aggressive opponents momentarily,ensuring that the both of you are back at neutral spaced-out positions. Both modes build up Kinetic meter differently: Advance meter is gained by being on the offensive, while Deflect meter is acquired by blocking or taking hits.

Each of the 6 bots in the roster have their own varied fighting style. Chel is your Mexican plasma-tossing mid-range bot that “shotokan” players will love. Talos is your grappler; he can grab you from the ground or when you’re jumping at him, with the added armor bonus if you charge those suplex moves up. Korean bot Crow tosses spinning flaming disks in any location to bait & misdirect opponents so that he can dish out his overheads and mixups.

There’s something for everyone here despite the minute character count, and the Loadout mechanic has potential to make every matchup against a particular bot anything but the same-old same-old. One man’s Talos with a shoulder charge-slash-clothesline tackle is another man’s Talos with a Magnetic Pulse for sucking opponents in for easier grab-and-slam TLC.

Other little-yet-significant-to-tourney-players touches include characters flashing gold and blue to show off invincibility and armored frames respectively, super Kinetic moves that can be followed up with regular combos, and the okay-to-awesome GGPO connection when fighting opponents online. It’s not perfect, but at least it’s accessible and more stable than Street Fighter V’s recent “beta program”. 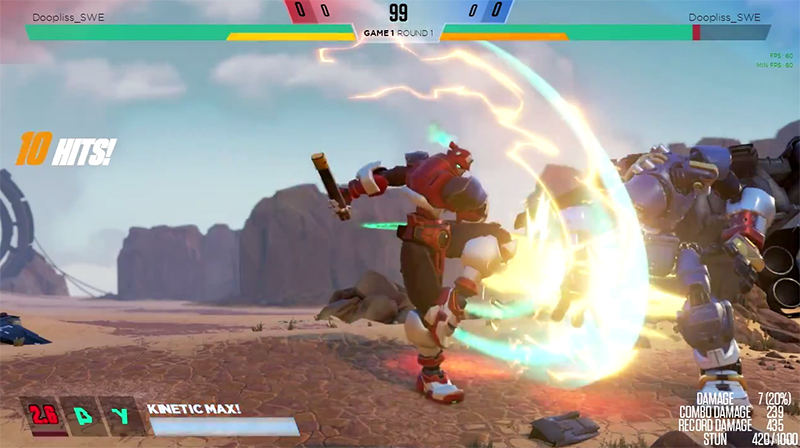 20 online matches later, it’s safe to say that Rising Thunder is a worthy contender to the new fighting game throne given its pedigree. Producer Seth Killian of high-level Street Fighter play back in the 90s leads the charge in making this game fit in line with today’s tourney-level PC games of the MOBA and first-person shooter variant. At the same time, it definitely can widen the appeal of the supposedly-niche genre for the masses.

And if you’re STILL not convinced about the potential of this game, we do hope the bottom video courtesy of Dooplis will inspire you to at least sign up for the alpha. At the very least, you will not be fumbling the joystick around pulling off a simple plasma-chucking move.