Asia’s premier gaming convention GameStart will be back for the second year from 13 to 15 November at Suntec Convention Centre Halls 401 and 402. Last year’s event attracted over 12,000 visitors from around the region, and this year’s is all set to be even bigger and better. 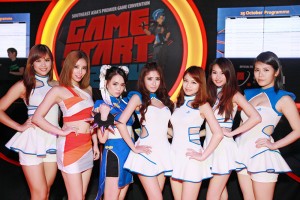 Besides a massive line-up of the newest and hottest games, the event is once again host to the Capcom Pro Tour Asia Finals, which will see the top Street Fighter players from Asia fight for a qualifying place in the global Capcom Cup tournament at the end of the year. GameStart 2015’s FIFA tournament will feature bigger prizes and the addition of qualifier events in Singapore and Malaysia. Also making its return is the Game On! Cosplay Competition, and more information, including the identities of GameStart 2015’s two celebrity guest cosplayers will be revealed in the coming weeks.

“The response to last year’s show completely blew our expectations,” said Elicia Lee, Director of Eliphant Pte Ltd, which organises the event. “We knew that there was a gap in the market for a consumer gaming event, but we didn’t quite expect the turnout and it was great to see the wide range of attendees. Besides the gamers, there were also tourists and families which was really fantastic. It just proves that gaming is no longer a niche activity, but one that everyone can get into.”

GameStart 2015 will occupy double the floor space, and be held over three days instead of two, with the addition of a B2B session on 13 November, and a one day conference for knowledge sharing and networking. Called ‘Gaming in Asia – Insights and Trends’, the conference will cover a range of topics from game marketing strategies to IP protection. More information will be revealed in the coming weeks.

In line with its objective of showcasing local talent, GameStart Asia has collaborated with Seow ‘Sonic’ Zong Hui, developer of Street Fighter vs MegaMan, to develop its own mobile game, a first for an Asian gaming convention. The retro-style platformer features GameStart resident gamer girl and mascot Alyse battling increasingly challenging enemies in a bid to defeat a mysterious enemy, and along the way unlocks other playable characters, each with their own unique powers.

“The team at GameStart is very big on supporting and promoting local talent, and many of us grew up playing what is now considered to be retro games. We worked with independent local developers and designers to create a fun yet challenging game that brought back a lot of fond memories for us,” said Ms Lee.

Players can look out for in-game cameos by characters from games by Witching Hour Studios and Daylight Studios, as well as well-known personalities such as pro eSports player, Ho Kun Xian (“Xian”). Additional game content will be released in September and October 2015, and a special level unveiled at GameStart 2015, where show attendees can take up the challenge and stand to win prizes. The game is available on the App Store and Google Play from today, completely free to download and play.

Some of the exhibitors that have confirmed attendance at the show include Sony Computer Entertainment Inc and Taipei Game Show, and the show’s indie section, ‘Founders Base’, is filling up fast with game startups, artists and independent game studios from Singapore, Barcelona and Hong Kong.

A special Early Bird rate for exhibitors is available from now till 31 August. Interested parties can contact us here. Sales of Early Bird tickets to the event will begin in early September, and Xmashed Gear will launch a Limited Edition GS2015 tee design, exclusively available with tickets sold online.

GameStart 2015 is pleased to announce the Official Partners for this year’s show: