With the COVID-19 situation happening worldwide, news from the Tabletop world has crawled to a virtual standstill. However, we have a few nuggets for you. Stay safe and social distance! 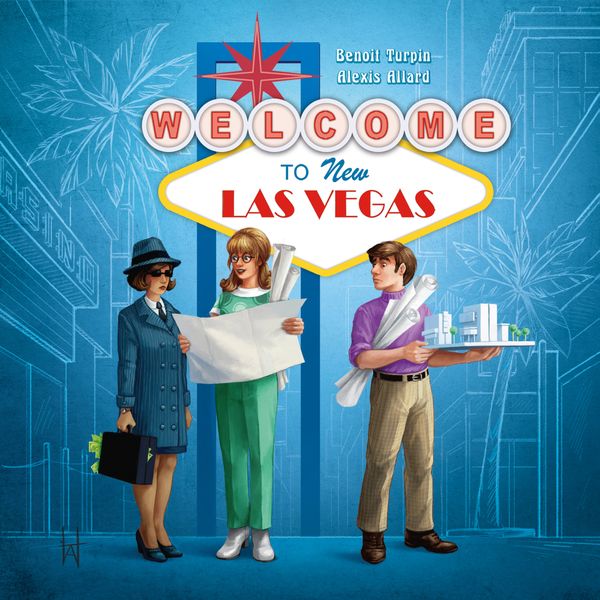 Big fan of Welcome To…? Well, there is a sequel on the way. New theme. New mechanics.

Rediscover the joy of Welcome To… with a new theme and new mechanisms in Welcome To New Las Vegas!

The game plays with a set of two different sheets — one dedicated to the map, the other used to keep track of the score and objectives — where you have to build and open casinos in the streets, hotels in avenues, create golf courses, give performances to the tourists, and move limousines for VIPs in order to build the greatest and most entertaining city and win the game!

Welcome To New Las Vegas keeps the same roll-and-write with dice-without-dice mechanism from Welcome to… Your Perfect Home: you flip cards from three piles to make three different sets with both a casino number and a corresponding action from which everyone chooses one. You use the number to fill in a casino on your street in numerical order. And everyone is racing to be the first to complete public goals. There’s lots to do and many paths to becoming the best resort architect in Welcome To New Las Vegas!

Because of the communal actions, game play is simultaneous and thus supports large groups of players. With many varying strategies and completely randomized action sets, no two games will feel the same! 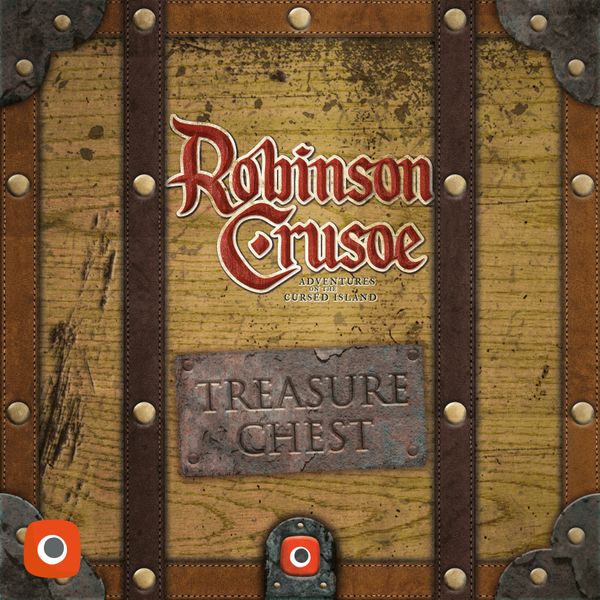 Missed out on all the promos that were released for Robinson Crusoe? Fear not! They are all being collected in one box for your playing pleasure. Out at the end of the year.

Treasure Chest is a special expansion including a complete set of Robinson Crusoe promos that have been released up to 2020, thereby giving players an enormous amount of content and variability to the game. 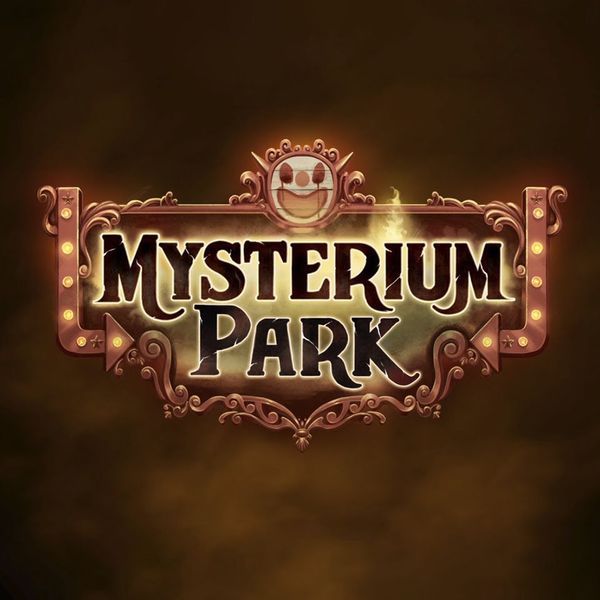 We are big fans of Mysterium here and this has us excited!

Welcome to Mysterium Park! Its cotton candies, its circus, its dark secrets…

The park’s former director has disappeared, but the investigation came to nothing. Since that night, weird things are happening on the fairground. As psychics, you’re convinced that a ghost haunts this carnival… You’re now intent on giving it a chance to reveal the truth.
In this cooperative stand-alone game, the ghost sends visions with illustrated cards. The psychics try to interpret them in order to rule out certain suspects and locations. Then, they’ll seize their only chance to piece together what happened to the director. You have only six nights before the carnival leaves town… Open your minds and find the truth!

Set in the lights of a 1950’s US fairground, Mysterium Park shares the same core mechanism with the famous award-winning game it reimplements, though bringing a different approach: it is smaller and faster, thanks to very quick setup and simplified rules.

Merchants of the Dark Road 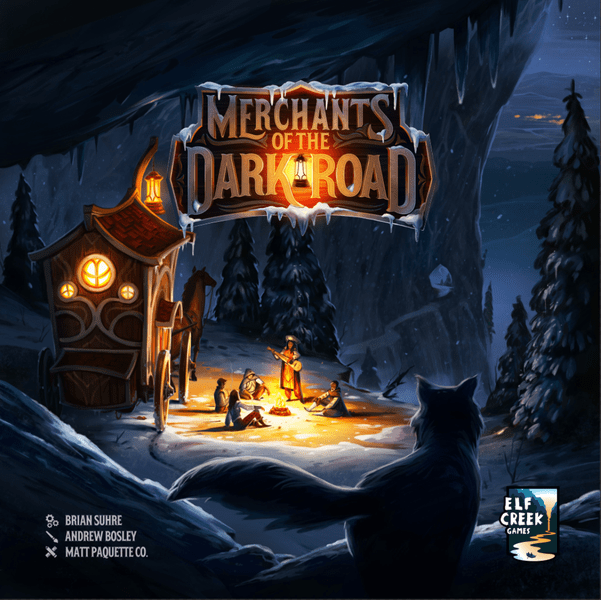 Loving the art on this one. Elf Creek Games are always easy on the eye and this is no different. Hitting Kickstarter in April.

After half a year of daylight, we must now prepare for the dark season. The roads will be treacherous but they will still need to be braved by a select few in order to keep our cities thriving. In Merchants of the Dark Road, you are one of these brave few merchants that travel the dangerous paths between cities. While the job is perilous, fame and fortune await.

Discover the capital city where most of your actions will take place using a rondel action system. Collect and produce items to add to your caravan, or sell these items to local heroes and hire them to travel with you. Manipulate the market price of items, visit the back alley sellers, or delve a nearby dungeon for magical items to gain the potential for even more coin and notoriety.

Gather lanterns to ease your passage along the dark roads as you guide your caravan to distant villages. Deliver goods and heroes to the best destinations and gain fame for your bravery! Balance the money you earn with the height of your fame because your final score after a number of game rounds will reflect the lowest of these two values. 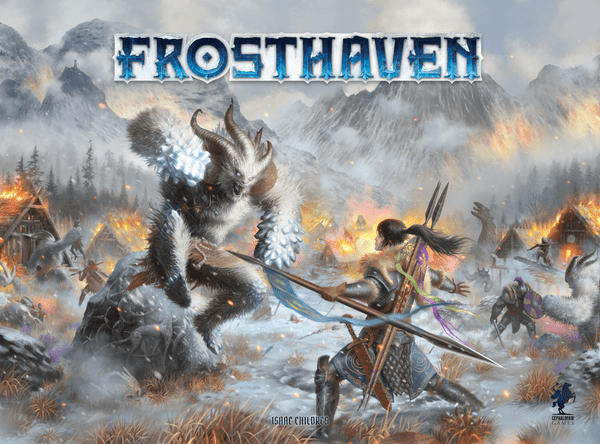 The sequel to Gloomhaven has just hit Kickstarter and it took $4 million USD in 24 hours. Let’s just say its popular. All the issues of Gloomhaven have been fixed and gameplay has been expanded. We were on the fence about the original game but this one has us interested. You can check out the Kickstarter campaign HERE.

Frosthaven is the story of a small outpost far to the north of the capital city of White Oak, an outpost barely surviving the harsh weather as well as invasions from forces both known and unknown. There, a group of mercenaries at the end of their rope will help bring back this settlement from the edge of destruction.

Not only will they have to deal with the harsh elements, but there are other, far more dangerous threats out in the unforgiving cold as well. There are Algox, the bigger, more yeti-like cousins of the Inox, attacking from the mountains; Lurkers flooding in from the northern sea; and rumours of machines that wander the frozen wastes of their own free will. The party of mercenaries must face all of these perils, and perhaps in doing so, make peace with these new races so they can work together against even more sinister forces.

Frosthaven is a standalone adventure from the designer and publisher of Gloomhaven that features sixteen new characters, three new races, more than twenty new enemies, more than one hundred new items, and a new, 100-scenario campaign.

In addition to having the well-known combat mechanisms of Gloomhaven, Frosthaven will feature much more to do outside of combat, such as numerous mysteries to solve, a seasonal event system to live through, and player control over how this ramshackle village expands, with each new building offering new ways to progress.

Characters and items from Gloomhaven will be usable in Frosthaven, and vice versa:

As revealed during PAX 2020, Frosthaven will be interchangeable with the original Gloomhaven board game. To an extent, anyway. Namely, you can use Gloomhaven’s characters in Frosthaven and vice versa. What’s more, some of the first game’s items will become available throughout the sequel.

Frosthaven has a whole new set of items but there is a mechanic for bringing items over from Gloomhaven. However, as it is a remote location, these products get imported and are not there as standard. Resources are much more valuable and you have to build items through a crafting system rather than just buy them.