Hello. How have you been?  We’re all prepping for GameStart here but we have a few nuggets of Tabletop news to give. Shall we start?

Zona: The Secret of Chernobyl 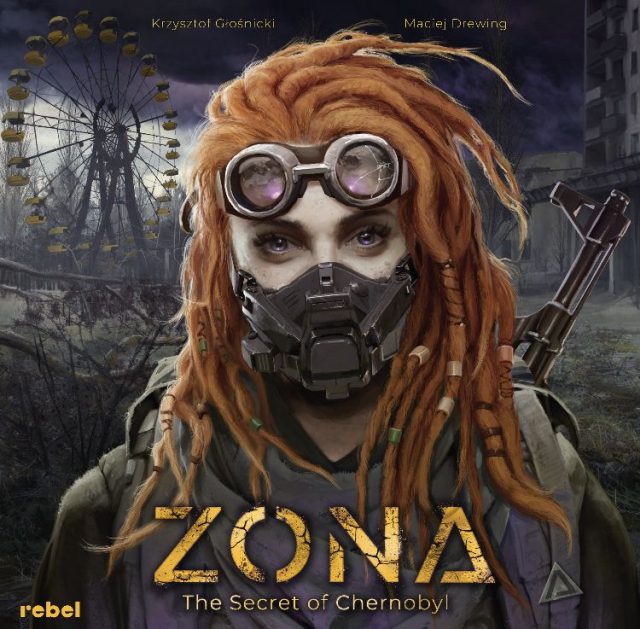 Who watched the fantastic mini-series, Chernobyl? Well, now you and three other players can venture into the famous reactor and uncover mysteries and presumably something horrific.

“Zona” is an adventure board game designed for 1-4 players. To win the game, the player must reach the sarcophagus of the Chernobyl Nuclear Power Plant before the other players. The sarcophagus opens only when a player has collected 2 Secrets from the underground facilities known as Secret Locations. Players must hurry because there is a time limit to the game. When the Final Emission (wink wink!) strikes, everything is lost…

We love survival games and this one is dripping in theme. Hopefully we get a great English translation as what we have seen so far is a little wonky. 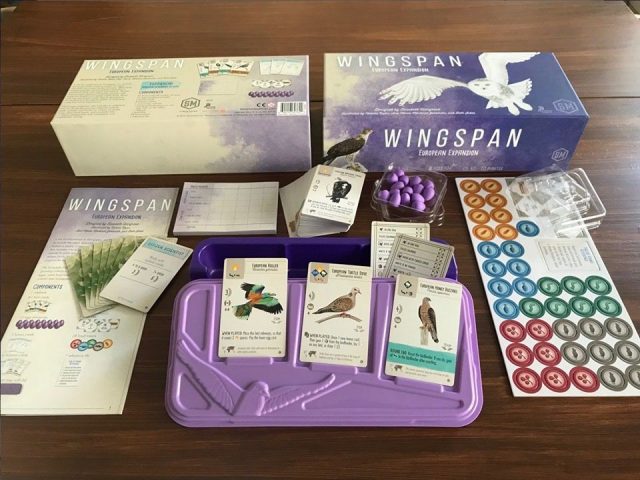 The hottest game of 2019 is about to get an expansion! Lovely! But surely they should have called it Wingspansion? Right?

The first expansion to Wingspan will increase the scope of the world to include the regal, beautiful, and varied birds of Europe. These birds feature a variety of new abilities, including a number of birds with round end abilities, abilities that increase interaction between players, and birds that benefit from excess cards/food. Along with the new bonus cards, they’re designed to be shuffled into the original decks of cards (and cards from future expansions).

The European Expansion also includes an additional tray for storing the growing collection of birds (past, present, and future), as well as 15 purple eggs, extra food tokens, and a colourful new scorepad designed for both multi-player and single-player scoring.

Hyped! This is heading to retail on 22nd November! Christmas comes early. 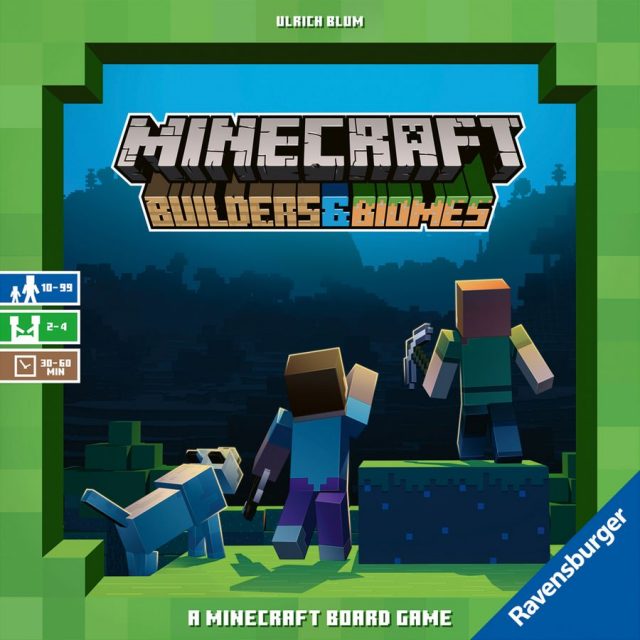 Ravensburger are on a roll at the moment. Jaws, Horrified and now this. This looks fantastic, to be honest.

As in the original Minecraft digital game, in Minecraft: Builders & Biomes players explore the Overworld, build structures, and mine resources, earning points for structures and the largest connected biomes of a forest, desert, mountain, or snowy tundra spaces on their player boards.

Familiar foes like Endermen, Creepers, and other mobs also appear throughout the game, and they need to be defeated using weapons collected from the board. Defeating mobs earn players points in addition to granting additional awards. Game scoring occurs as the resource cube’s layers are depleted. As soon as the third layer runs out, the adventure comes to an end, and the builder with the most points wins.

In more detail, on a turn you take two different actions from the following possibilities:

• Collect two blocks: At the start of the game, you set up a 4x4x4 cube of building blocks with 16 wood, 14 sand, 12 stone, 10 obsidian, and 12 emerald being placed together at random. When you collect a block, the top face and at least two other sides must be revealed.

• Move: Your character starts in the center of a 4×4 grid of tile stacks, with each stack holding four tiles. Weapon tiles are placed at the end of each column and row. Move 0-2 spaces between stacks, then reveal all adjacent tiles that are face down.

• Build: Discard blocks from your personal supply to match the building requirements on a tile next to your character. Place this tile on your personal 3×3 building board.

• Fight a mob: Choose a mob adjacent to your character, then reveal three tiles from your weapon stack, which starts with a stone sword, a wooden sword, and three poisonous potatoes. Tally the number of hearts revealed; if this sum is at least as large as the number of hearts on the mob, you defeat it. Remove it from the board, and place it next to your personal building board. Mobs might grant you an endgame scoring bonus, immediate points, or a one-shot bonus action.

• Collect a weapon: If your character is next to a weapon tile at the edge of the playing grid, you can shuffle it into your weapon stack. 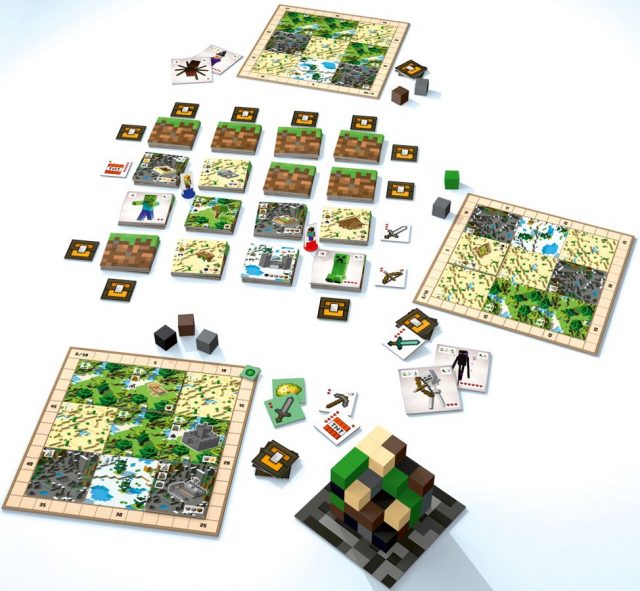 Scoring takes place three times during the game, specifically after the final block is removed from the first, second, and third level of the building block cube. In the first round, you choose one of the four biomes (forest, desert, mountains, or snowy tundra) and score for the largest connected area of this biome on your personal building board. The board comes pre-printed with biome spaces, and as you place buildings on this board, you can alter the biome of a space. In the second round, you choose one of three materials (wood, sand, stone, or obsidian) and score for the largest connected group of structures on your personal building board that are made of this material. In the third round, you score for the largest contiguous group of structures (decoration, dwelling, animal house, or bridge) of your choice on your board. After scoring in the third round, tally bonus points from the mobs you’ve collected. 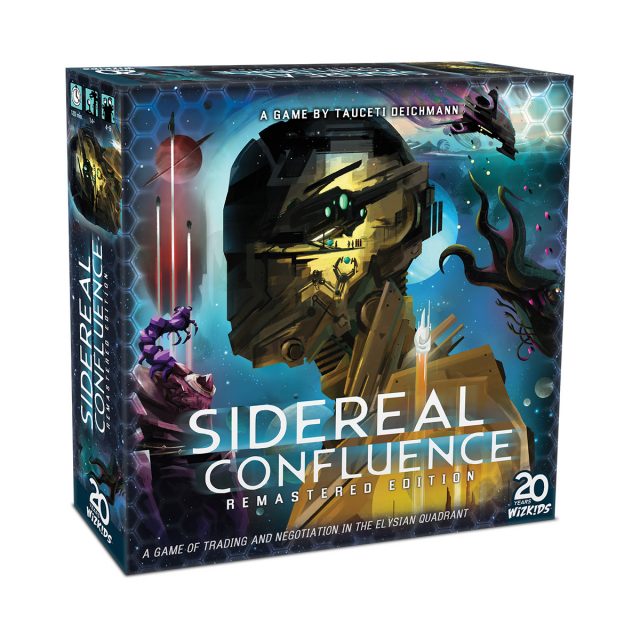 Sidereal Confluence is a fantastic game of trading and negotiation that unfortunately looked as plain as a Bulgarian pin-up.

Things are about to change as WizKids is re-releasing it with new art and components. It looks wonderful!

Sidereal Confluence: Trading and Negotiation in the Elysian Quadrant is a singularly unique trading and negotiation game for 4-9 players. Over the course of the game, each race must trade and negotiate with the rest to acquire the resource cubes necessary to fund their economy and allow it to produce goods for the next turn. Scheming, dealing, and mutually beneficial agreements are key to success. While technically a competitive game, Sidereal Confluence has a uniquely cooperative feel during the trading phase as no race has the ability to thrive on its own. Trade well, and you’ll develop technologies and colonize planets to form a civilization that is the envy of the galaxy.

The unique aspect of this game? It’s all done simultaneously! No rounds. No turn order.