Is it March already? Wow! Time flies when you play a lot of board games! We don’t know if that is good or bad. Well, actually we do. It’s all good. Of course it is. 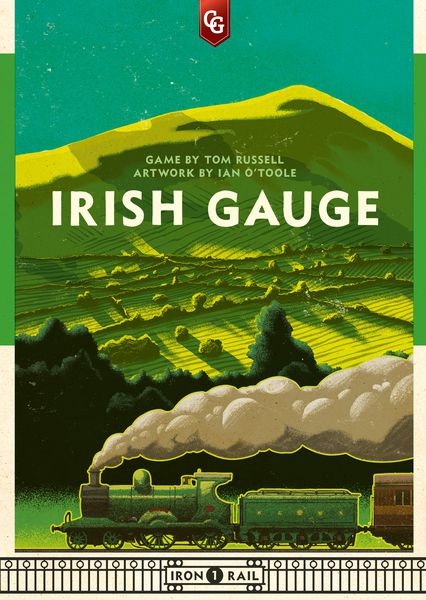 Anything from Capstone Games is immediately easy on the eye and the first game in the new ‘Iron Rail’ series is certainly no different. Just look at the box art. Simple yet oh so beautiful. But the question is, do we really need another train game? It seems we do…

What is the aim of Irish Gauge? On each player’s turn, they can either place a share of one of five companies up for auction, build track (represented by cubes) in one of these five companies, upgrade a town to a city, or call for dividends. The dividends are paid out to shareholders of certain railroads based on how many cities/towns they connect to and how many shares of this company have been issued. The upgrade and dividend actions also affect the games length and the likelihood of further dividends for each company. The game ends when a certain condition is met at the end of a player’s turn, and the player with the highest sum of money and stock value at the end of this turn wins. 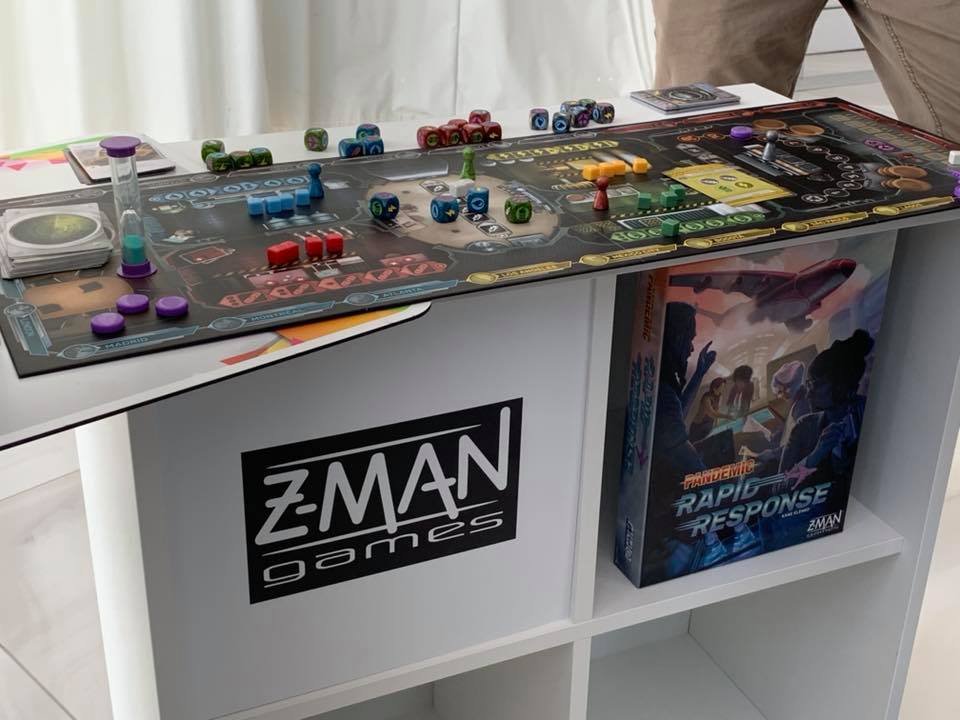 Not the Pandemic news we wanted (Season 3 of Legacy..please!) but still ok. Not much to go on with this one as all we have is the picture above. Seems to be a real-time dice rolling game which in the world of Pandemic could be pretty cool. Nice to see them break away from the standard Pandemic formula. 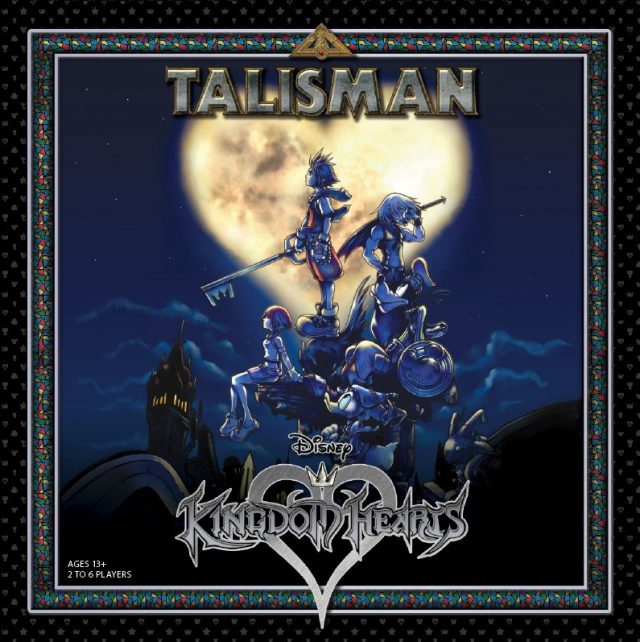 A few weeks ago it was announced that USAopoly and Games Workshop were teaming up to release licenced versions of Talisman. Well, here we are. The first one is a Kingdom Hearts game.

In Talisman: Kingdom Hearts, Sora, Kairi, Riku, King Mickey, Goofy, and other comrades must acquire the needed strength and magic to seal the Door to Darkness and keep Heartless from consuming the communal worlds.

An artful game board with three regions, custom marbleized six-sided dice, tokens, and cards maintain the beloved aspects and exploratory spirit of earlier versions of the Talisman board game while offering lighthearted Disney nostalgia. Memorable locations such as Never Land and Traverse Town, Munny-themed currency, Gummi Paths and more comprise a brand new journey to the delight of sentimental fans.

Talisman is a great game and this theme is a good start, we just hope there are better themes coming in the future. Great for KH fans though. 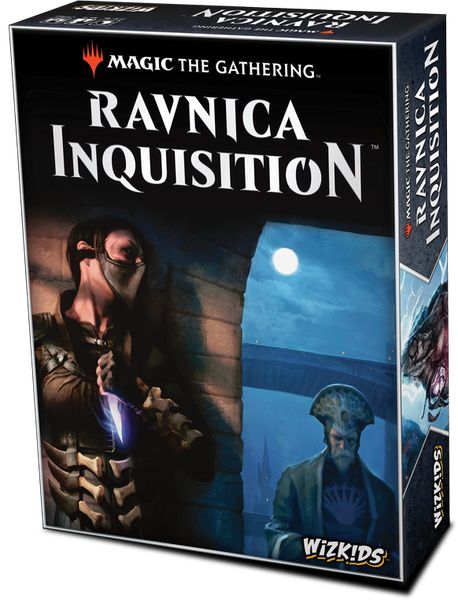 Join the Gatewatch or pledge your loyalty to Nicol Bolas in Ravnica: Inquisition, a social-deduction game set on the Magic: The Gathering plane of Ravnica. Each player takes on the role of a representative of a Ravnican guild that is either loyal to the Gatewatch or an Agent of Bolas.

The Gatewatch loyalists are tasked with discovering who the Agents of Bolas are, while the Agents simply need to survive in order to further the schemes of Nicol Bolas.

Players will elect leaders for each of the five colours, but only players whose guilds’ colour pairs contains the colour may be voted for. Each colour leader has a special power they can use to further their goals, and players must be careful when voting, as Nicol Bolas’s influence may grow. Once all the colour leaders have been elected, a vote is held to eliminate one player. Once the dust has settled, players will reveal their roles, and if the Agents of Bolas were eliminated, the Gatewatch wins.

We need to try this before we say anything else. 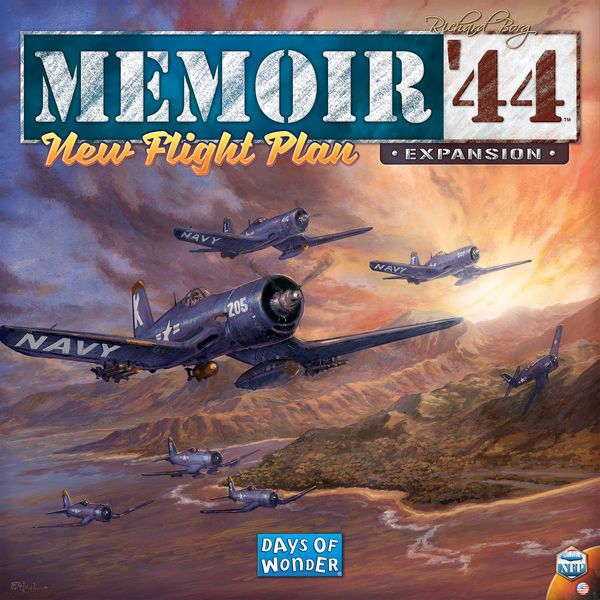 From out of nowhere Memoir ’44 gets an expansion. Wow!

In the Memoir ’44: New Flight Plan expansion, players can deploy air units such as fighters, fighter-bombers and even bombers to support their troops on the battlefield. This is not the first time aeroplanes will make an appearance in the Memoir ’44 system, but with its all-new set of streamlined rules, Memoir ’44: New Flight Plan grants many new tactical options and is compatible with all existing scenarios in all theatres of operation. The expansion also comes with 21 new scenarios and 16 finely-crafted, legendary planes, in impressive sizes, such as the B-17 that measures 72mm by 101mm.

We are casual fans of Memoir ’44, it gets to the table once in a while but hopefully, with this expansion, it will see more playtime.

This weeks Kickstarter is a doozy. From the makers of Exploding Kittens comes the first ever Dodgeball card game, Throw Throw Burrito. We are sold on it already. Just go HERE and back it.

Throw Throw Burrito is what you get when you cross a card game with dodgeball. Try to collect matching sets of cards faster than your opponents while simultaneously ducking, dodging, and throwing squishy airborne burritos. The cards you collect earn points, but getting hit by flying burritos loses them. So clear some space and put away the antiques, because you’ve never played a card game quite like this before.

Half card game. Half dodgeball. 100% extraordinary.