Greetings from the world of cardboard tokens, card decks, plastic miniatures and wooden meeples. We have Pandemic news! Pull up your face masks and get ready to fight off the infections again in Pandemic Legacy: Season 3!

Ah! The sub series of Pandemic. We’ve had Reign of Cthulhu, Iberia and Rising Tide so far. All featuring very different mechanics and goals but all wrapped up in the classic Pandemic style of game play. Rising Tide saw you battling floods rather than diseases and now Fall of Rome sees you protecting Rome from all sorts of invaders. 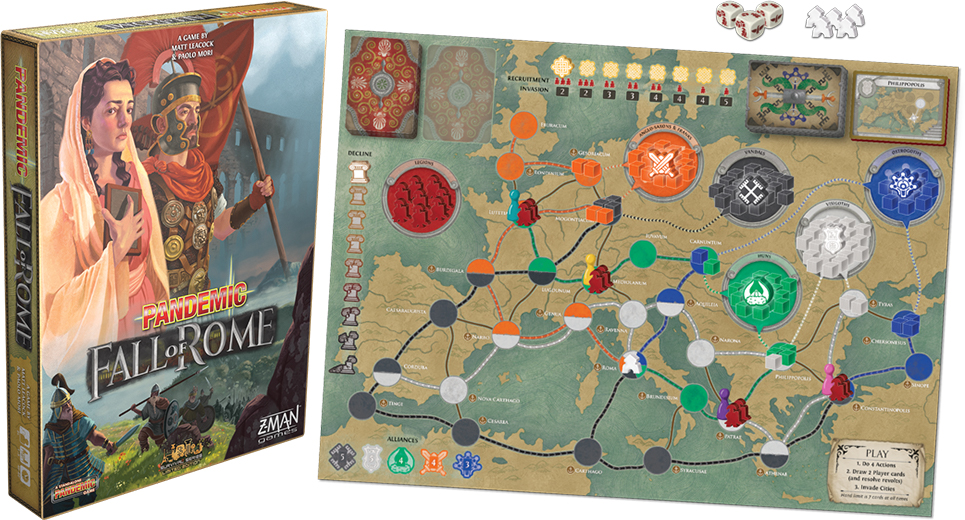 From the back of the box:

At the height of its power, the Roman Empire held more than two million square miles of territory containing over a hundred million people. Throughout the centuries of its existence, the Empire brought major advancements in engineering, architecture, science, art, and literature. By the beginning of the 5th Century, decades of political corruption, economic crisis, and an overburdened military had exacted a severe toll on the stability of the Empire. This paved the way for severe incursions from aggressive barbarian tribes, leading to a decline from which Rome would not recover. Now citizens, soldiers, and allies of Rome must unite to protect the Empire.

Combining the cooperative gameplay of Pandemic with innovative new mechanisms, Pandemic: Fall of Rome takes players back in history to the time of the world’s greatest empire: Rome. A weakened military has left the borders open to invasion from countless tribes such as the Anglo-Saxons, Goths, Vandals, and Huns. As you march through the Roman Empire, you must recruit armies, fortify cities, forge alliances, and face off against the invading hordes in battle.

Simply defending Rome is not enough; players must find a way to stop the incursions and find peace with their neighboring peoples. Players collect sets of matching-colored cards to forge an alliance with the different tribes. In doing so, they gain the ability to use cards matching the tribe to convert other members of that tribe into Roman soldiers, furthering their ability to hold the line against other invaders.

Take on unique roles with special abilities to improve your team’s chances to protect against the invaders. Work together, use your skills wisely, and stop the fall of Rome!

Pandemic: Fall of Rome includes a solitaire mode in which the player takes on the burden of being the Emperor and commands three different roles to try to protect the city from the invading hordes. Players who want a more difficult game can try the “Roma Caput Mundi” challenge by adding more Revolt cards to the deck; they must also respect the law in Rome that Roman legions are not allowed in the city.

Out of all the sub series, this looks the most interesting. But let’s be all honest here. We’re just waiting for Season 3. Are we right or what? 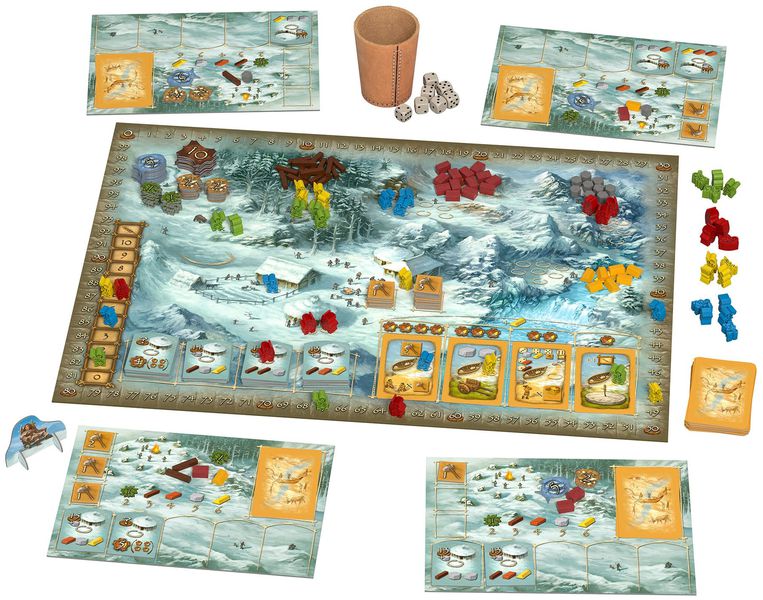 Gameplay looks to have stayed the same but a few things have changed. It now features a double-sided game board (winter and summer), decorative player pieces, a revised rulebook, two mini-expansions (“The Igloos” and “The Wild Animals”), and a “Winter Is Hard!” variant. Worth upgrading if you already own the game? Not sure. Worth getting if you don’t have it? Definitely! Wait! What do you mean you don’t already own it? Get to the back of the class!

Ooooh! We love Gamelyn stuff here. The Tiny Epic series packs a big punch in such a small box and Tiny Epic Quest is one of our favourites until we saw Tiny Epic Mechs! Aw. So cute the Mechs! We wish we had a picture to show you just how cute they are. But we don’t. They are really cute though. We just want to eat them all up. We have a picture of the box though and the game overview. 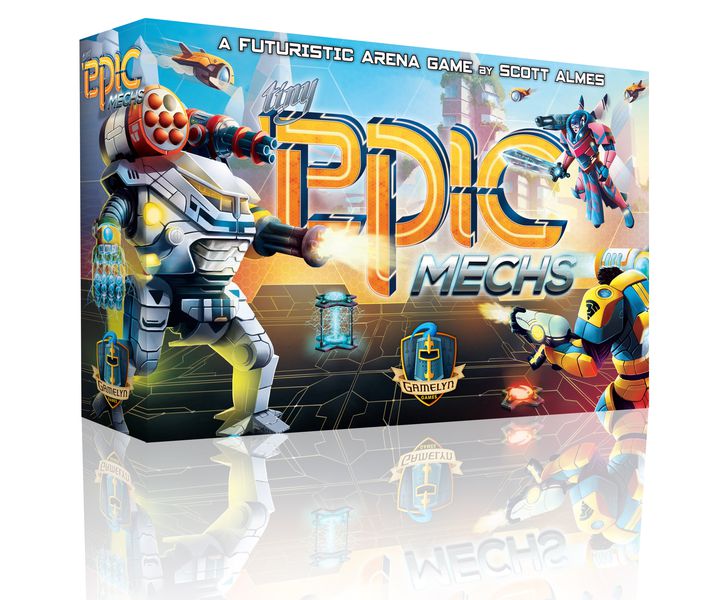 From the back of the box. We are surprised that the text could fit on such a tiny box. Speaking of tiny, did we tell you how cute the Mechs are…

Tiny Epic Mechs is an arena-style player-vs-player action-programming game. It features ITEMeeples with plastic molded power armors and a Mech suit that the ITEMeeples actually go inside of.

In Tiny Epic Mechs, players take on the roles of highly skilled and athletic Mech pilots. They compete in a free-for-all battle royale over the span of six rounds. In each round, players select four of eight available actions to program. These actions keep you moving around the arena while allowing you to deploy high-scoring defensive turrets, plant explosive land mines with hidden values, collect resources, purchase weaponry, and power up into your Power Armor or eventually the highly-sought-after Mech Suit. While each player has their own Power Armor, there is only one Mech Suit, reserved for the king of the hill.

Your programmed actions are played out one at a time around the table until all players have executed their four actions. When you cross paths with another player, combat ensues. During combat, players exchange fire until one player is out of ammo and must retreat, or they are defeated and forced to reset.

This sounds like a lot of fun and the Tiny Epic series usually are. This is coming out sometime next year. Keep your eyes peeled! The mechs are cute if we hadn’t mentioned that before..

The Kickstarter this week is an expansion to a game we hold dear, Everdell. A luscious tableau builder that’s wonderful to play and beautiful to look at. You can check out the review here. Anyway, the first expansion is up on Kickstarter and you can back it here. With this expansion you will be able to explore a new underwater society in Pearlbrook. 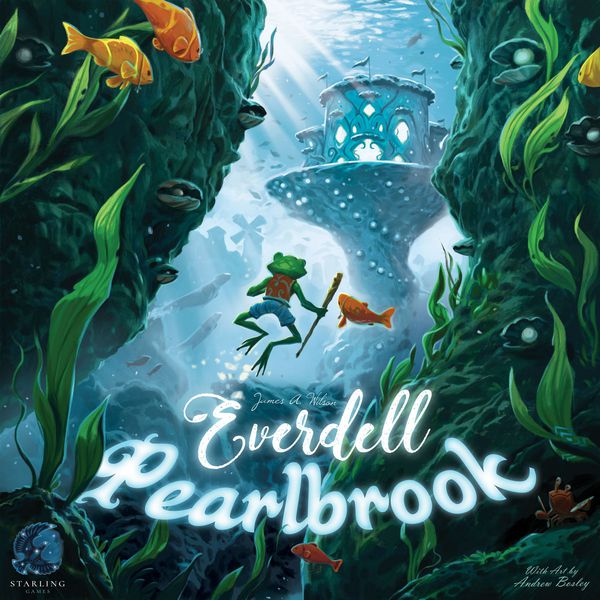 Pearlbrook introduces a new side board, the river board, where you’ll send your frog ambassador to gather a new resource: pearls. You’ll also encounter new aquatic critters and constructions! Collect enough pearls and you can construct fabulous wonders and adornments, to make your city the pride of Everdell! We can’t wait for this. Quite a while though. Not due until September 2019!

Well, that’s it for this week! A brief update but a very juicy one. What else do we have for you?

Be on your way!

The tiny cute one?

We don’t have a picture!

We’ll be back next week. Same time. Same place.