Some very tasty game news this week. A sequel to Orleans you say? Yes! A new Jamey Stegmaier game? Yes! Let’s start with that one… 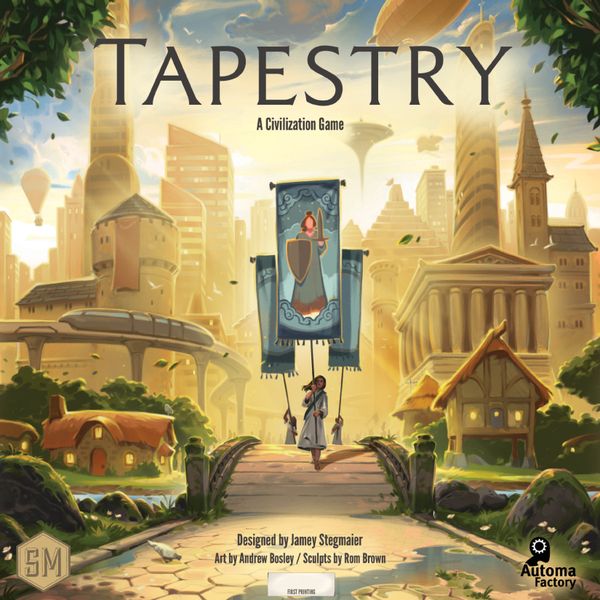 What can we expect from this one? Well it’s a Stonemaier game so that means wonderful art and top quality components for starters. Tapestry is billed as civilization game that can be played in 2 hours. For a civilization type game that’s pretty impressive. Hope it really does play at that length.

Create the civilization with the most storied history, starting at the beginning of humankind and reaching into the future. The paths you choose will vary greatly from real-world events or people — your civilization is unique!

In Tapestry, you start from nothing and advance on any of the four advancement tracks (science, technology, exploration, and military) to earn progressively better benefits. You can focus on a specific track or take a more balanced approach. You will also improve your income, build your capital city, leverage your asymmetric abilities, earn victory points, and gain tapestry cards that will tell the story of your civilization.

With a rule book that is also only 4 pages long, we have high hopes for this. Scythe and Wingspan are in our Top 10 games! Fingers crossed on this one.

Pre-orders start on 1st September direct from Stonemaier. They will deliver by end of September. Then the full retail release will follow in November.

You can check out a fine ‘How to Play’ below from the wonderful Rodney Smith: 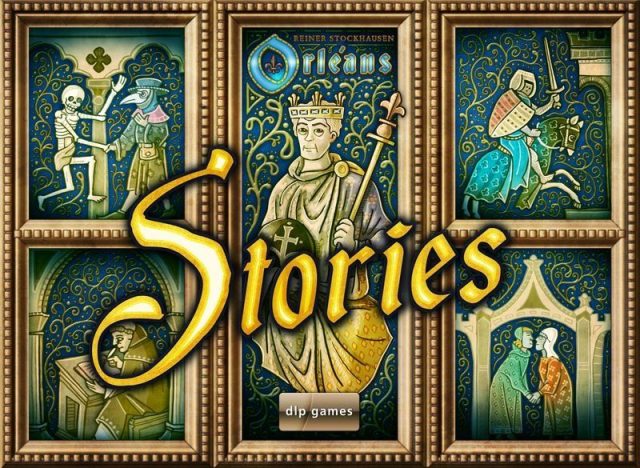 We love the bag building and resource management of Orleans and we are super hyped for this follow up that seems to have a story telling element to it. Intrigued!

Orleans Stories is based on the bag-building mechanism known from Orleans, with this mechanisms having been further developed into a storytelling experience in which players go through different eras and face different challenges.

The game includes two stories: “The First Kingdom” and “The King’s Favor”. “The First Kingdom” is an epic story that spans eight so-called eras, and each era features different conditions and emphases. Sometimes knights settle down, with whose help you can conquer foreign territories, sometimes the plague threatens to decimate the population of settlers unless all have worked together to develop medicine.

“The King’s Favor” is shorter, simpler, and more suitable as an introduction to the game. Over five eras, certain tasks have to be fulfilled by the end of each era, and those who fail to do so will drop out mercilessly. The threat of having to end the game prematurely provides a constant thrill, but all tasks are achievable, so that (usually) all players experience the end of the fifth era — but those who have concentrated only on the tasks will be punished because at this point everyone’s achievements will be compared in the king’s castle, and you will receive victory points for territory size, buildings, goods, and coins.

Looking forward to this. Player elimination though? Hmmmm….

Sounding like something from the 90’s, The Mind: Extreme is a follow up to, you’ve guessed it, The Mind.

The Mind: Extreme offers a more complex challenge as now instead of a deck of cards from 1-100, you have two decks each numbered 1-50. Now you’ll have two discard piles in play, with cards from one deck needing to be played in ascending order and cards from the other being played in descending order. What’s more, some levels must be played blind — that is, with the cards discarded face down so that no one sees what you’ve played. Can all players get in the right groove and discard everything in the proper order? 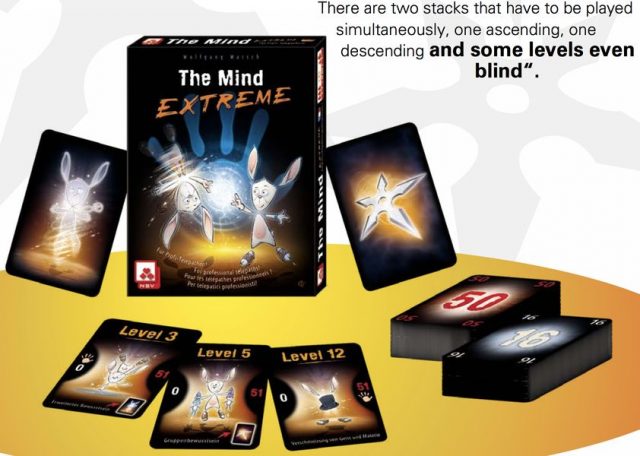 The Mind when first released was an oddity but has since become very popular in many gaming circles. This new version keeps everything from the original and bumps up the difficulty. 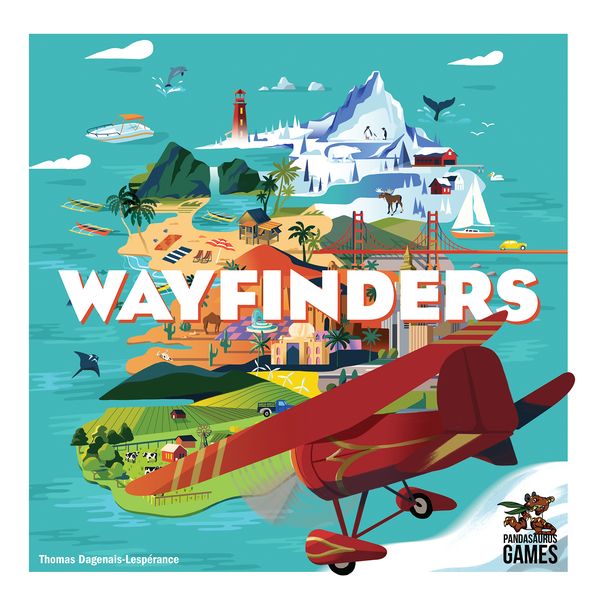 In love with this one already. It looks beautiful. First announced at Gen Con, we now have a release date. 30th October!

Engines purring, goggles down — the seaplane is set for take-off! Welcome to the whimsical world of Wayfinders in which intrepid explorers race to chart new paths through the skies.

You will need to think on your feet and outfit your planes with the right gear to arrive safely — but building hangers on islands and stocking them with parts can help you zip around with ease! Be sure to be keen in your planning and you will unlock the charms of the islands. Wheels up — adventure awaits!

It’s so pretty we’re gonna have to show you more: 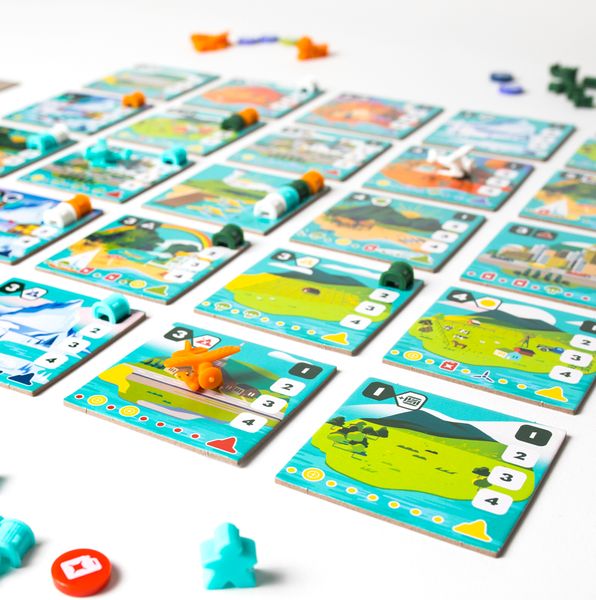 This game ticks many boxes for us. Worker Placement. Check. Modular Board. Check. Press Your Luck. Check. Cannot wait for this one. Check. 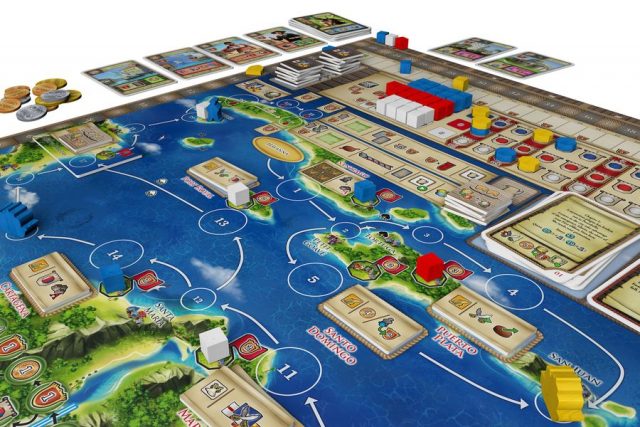 This also look right up our street. Coming from Capstone Games (one of our favourite publishers) sometime in October, this is on our must have list with a ton of other stuff.

Maracaibo, the new strategy game for 1-4 players by Alexander Pfister, is set in the Caribbean during the 17th century. The players try to increase their influence in three nations in four rounds with a play time of 40 minutes per player.

The players sail on a round course through the Caribbean. E.g., you have city tiles where you are able to perform various actions or deliver goods to. One special feature is an implemented quest mode over more and various tiles, which tells the player, who chase after it, a little story.

We’ll be back next week with more news and some good Kickstarter stuff!