GameStart was a blast this year! Thanks to all those who came by and played some great games with us. We had great fun teaching Lords of Hellas, Who Goes There? and many more! Now it’s back to business. The business of new boardgames.

SPIEL is happening next week (25th to 28th) and there is a ton of great games being released or previewed. Let’s take a look at some of the ones that caught our eye.

This game is just beautiful. Look at it. Once setup it deserves never to be placed back in the box. So what do we do in this game apart from marvel at its beauty? Well, Tang Garden is a Zen-like game that will take you to the first golden age of China, where players will progressively build a garden by creating the landscape, placing the scenery and projecting their vision through vertical panoramas. During the construction, noblemen will visit the garden to admire the surroundings and the way the natural elements coexist in the most breathtaking scenery humankind has ever laid their eyes upon. 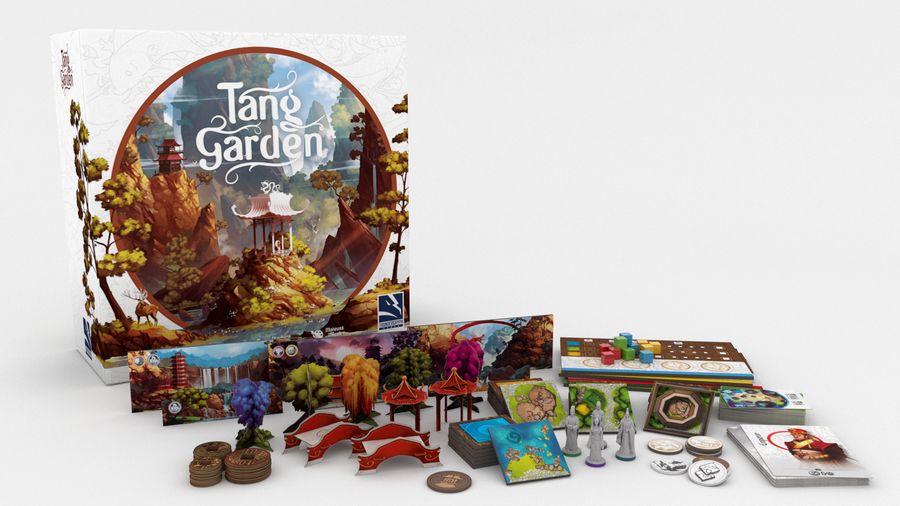 How does it play though? By the looks of it fairly easily. From the publisher:

Players will take turns by playing one of the two actions available in the game:

By balancing the nature elements on the player boards, players will attract new characters into the garden. On each player turn, if the elements are balanced, the player will have to choose one miniature from the ones available and finally decide which one of the characters will be placed in the garden, orienting them towards their favorite background, while keeping the other with you to keep exploiting its ability.

2) Draw decoration cards and place one on the board to get prestige by completing collections.

Players will draw a number of cards based on the board situation and choose one to keep. Players will then have to place the chosen decoration in one of the available spots in the garden, creating a unique and seamless scenario that will never be the same.

During the game, by placing tiles on special parts of the board, you will be able to place a panorama tile, a new element that adds a never-ending perspective for the visitors. Both small and big panoramas will be placed perpendicularly to the board by attaching it to the board insert by creating a seamless look on the four sides of the board. The Panoramas will interact with the characters at the end of the game by giving prestige points based on what your visitor sees and likes.

At the end of the game, the player with the most prestige will be the winner.

We got to play this at GenCon and would have bought it then and there if it was available. Alas, it wasn’t. Published through Capstone Games new Simply Complex imprint, The Estates is a simple but complex (hence the name!) game of bidding and building. The players take on the role of investors seeking to make the most money by developing buildings in the urban redevelopment area – The Estates. Players will bid for the various building pieces and place them in The Estates to their benefit. All buildings in completed rows score positive points, while all buildings in incomplete rows score negative points. 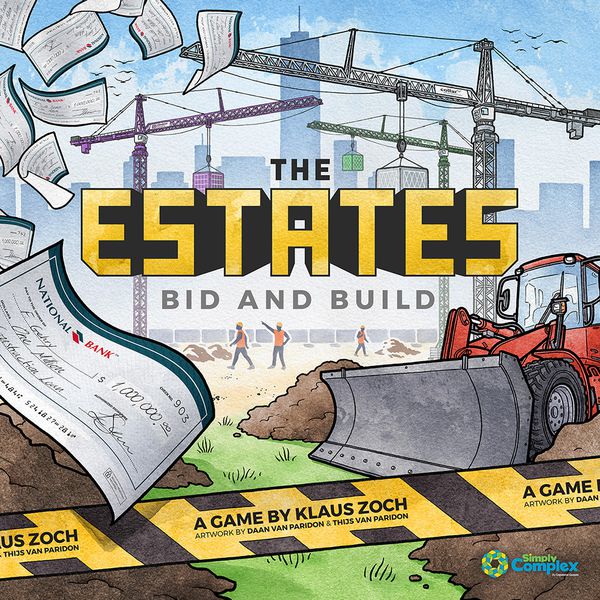 The zoning map for The Estates calls for two rows of four buildings each, located between the River and Main Street. The meadows on the other side of the River are to remain a recreational area for the City. But, with hopes of larger profits, investors and building tycoons entirely ignore the City Council’s demands and begin developing three rows of buildings instead. The Mayor catches wind of the potential for profit and begins planning a new mansion in The Estates, which would double the value of one of the building rows! With some sketchy building permits, investors begin developing buildings on the other side of the River, beyond the designated building zone. However, the City Council takes rigorous steps to put an end to the racketeering with an ultimatum: As soon as the first two rows are completed, the buildings in the uncompleted row will be torn down, resulting in a huge loss for all who invested there. At the end of the day, the investor with the highest-valued buildings will come out on top.

This is a fantastic game that clocks in at around 45 mins. This game could easily end friendships with the amount of backstabbing and dodgy dealings going on. We love it! We need to get a copy ASAP!

Portal Games latest looks at first glance like a simple reskin of Neuroshima HEX. Trust us. It’s not. But even if it was, that’s not a bad thing right?

Monolith Arena is a fantasy battleground board game built around the base engine of the aforementioned Neuroshima Hex, which is also from designer Michał Oracz. The game includes four factions, with unique abilities and units! Each player has a monolith that serves as their headquarters, and each player seeds their monolith with three tokens that provide special abilities. When an opponent damages your monolith, you remove the top layer to expose the first token, gaining its special ability, so being attacked can actually make you stronger — albeit while still moving you towards defeat… 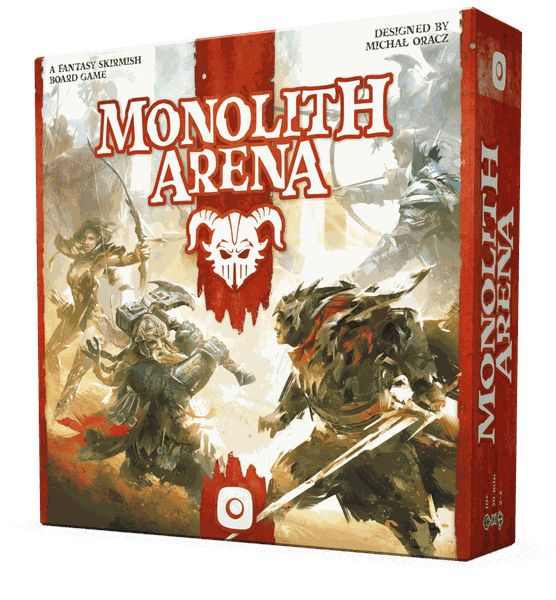 If you already own Neuroshima HEX then we suggest you try Monolith Arena before you buy. You might find the games too similar to really enjoy it. However, if you never owned Neuroshima HEX but always wanted to, then this is a must get. Fingers crossed that there won’t be a million and one expansions for it…Ya. We know. Who are we kidding? :/

UBOOT: The Board Game

We’ve had an eye on this for a while even though we are not great fans of real-time tabletop games. We just can’t take the pressure! This is basically Captain Sonar gone to the next level. Several levels in fact. So what do we do in this game apart from trying not to drown? 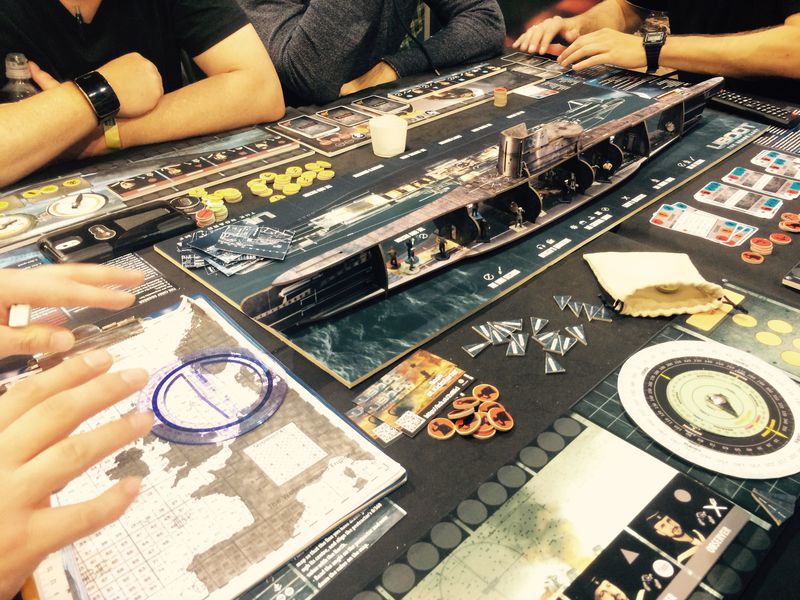 U-BOOT: The Board Game is a fully cooperative, real-time tabletop game of WW2 submarine warfare. It allows 1 to 4 players to assume the roles of the Captain, the First Officer, the Navigator, and the Chief Engineer on board a VIIC U-boat. The game is driven by a companion app, allowing for an unprecedented level of realism, as well as a challenging enemy A.I. which will push your skills to the limit. The action unfolds both on the strategic and the tactical scale, always demanding teamwork, efficient crew management, and quick situation assessment.

Not for our gaming group then. We would crash and burn in the dock before we could do anything worthwhile. More from the publisher:

Each of the four roles requires unique responsibilities, encouraging the players to develop an efficient communication scheme and use genuine navy terminology. The Captain oversees the completion of mission objectives, supervises action point costs, and is responsible for the crew’s morale. The First Officer operates the companion app, manages the flow of information, and takes care of the crew’s health. The Navigator steers the submarine by setting its course and depth but also updates all the essential information on the strategic, and the tactical map. Last, but not least, is the Chief Engineer, who is responsible for the engines, repairs, as well as other mechanical implements on board of the U-boat (such as the ballast tanks, weapon systems, etc.). At the same time, each of the four officers commands his own group of crew members by issuing orders within a worker placement system.

The idea behind the companion app is to deliver a real-time, realistic gameplay experience. To that end, the app features the most essential instruments of the u-boat (such as the periscope, the hydrophone, and the Enigma, among others). Rest assured, however, that the vast majority of gameplay traditionally takes place on the game board, with the instruments revealing otherwise hidden information, and the app requiring only certain data (such as the U-boat’s course, speed, etc.) in order to generate an adequate A.I. response of the enemy force. It is also responsible for all the ambient sound effects, thus immersing the players even deeper into the claustrophobic interiors of the type VII C. But fear not! With open & play being a design priority, you will be launching torpedoes in no time, thanks to streamlined rules, video tutorials, and variable difficulty levels for each player.

Azul just about won every award going over the past year. It’s simple and beautiful design capturing the minds of gamers around the world. So what next for Azul? Expansions? Nah, let’s go straight to a sequel.

Azul: Stained Glass of Sintra challenges players to carefully select glass panes to complete their windows while being careful not to damage or waste supplies in the process. The window panels are double-sided, providing players with a dynamic player board that affords nearly infinite variability!

Players can expect to discover new unique art and components in Azul: Stained Glass of Sintra, including translucent window pane pieces, a tower to hold discarded glass panes, and double-sided player boards and window pane panels, in addition to many other beautiful components! 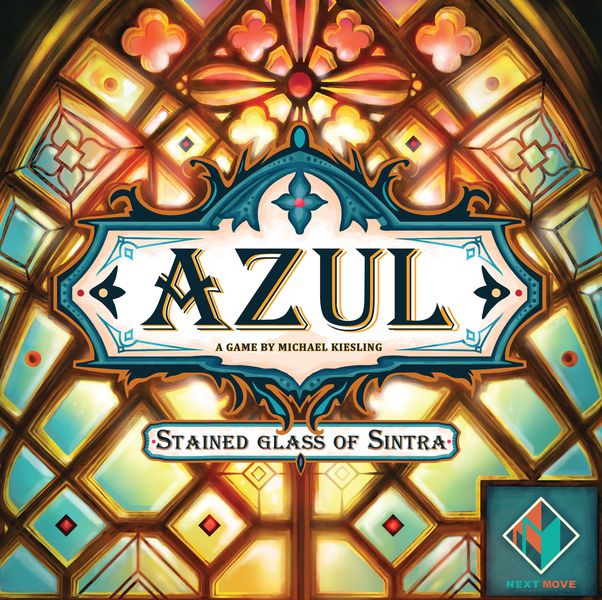 This looks good but we can’t help think of Sagrada when we see this. It also looks a little…cheap. Not a patch on the look of the original Azul. Mmmmm those lovely tiles. You could just eat those up. Here it’s just a board and some bland plastic window pieces. We shall see.

Capstone Games constantly delivers complex but highly enjoyable games. Wildcatters and Arkwright are two of our favourite ‘heavy’ games that are easy to learn but hard to master. When Capstone announces a new game, we all get a bit giddy here. Well, they have announced a new game. Pipeline. We are intrigued. And giddy.

Just look at this image. We want this game now! 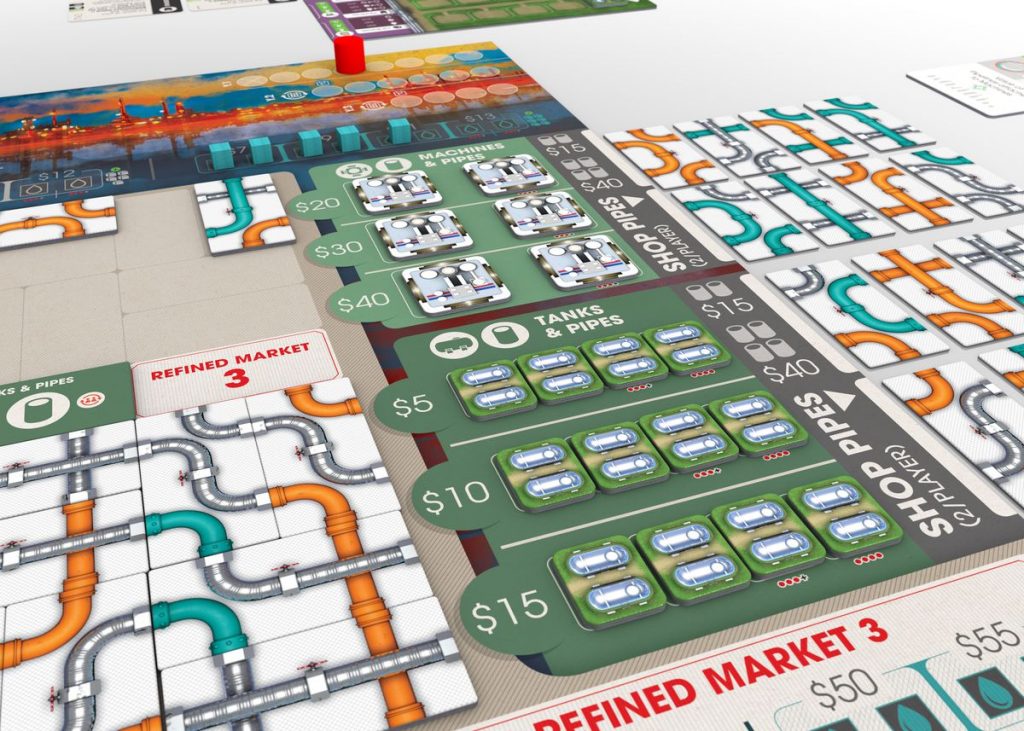 The refinement of oil has long been part of the government-controlled energy sector. Amassed with an incredibly complex and inefficient system of refineries, the government has felt the severe pressures of worldwide demand and the ever-increasing global standards for refinement. Unable to keep up with demand, the government has only one option: privatizing the oil industry.

This is where you come in. Seeking to capitalize on this new opportunity, in Pipeline you start a company in the oil business. You will focus on building a much more efficient pipeline network in your refinery, hiring experts that provide valuable benefits over your competitors, and managing the logistics of purchasing and selling your refined oil in the various markets. You will need more than strong economic skills – carefully crafting an interweaving network of pipelines just might ensure your victory!

We want this now! Demos at SPIEL only. Sad. When can we buy it?! Hopefully this year. *holds breath*