Gather round people. We have interesting news. Metal Gear Solid is back and a certain Kickstarter is taking in a ton of money!

Metal Gear Solid: The Board Game

First up. Wow! This IP has been ripe for a board game since for whenever. IDW Games has stepped up and is in the process of making it a reality. Designer? Non-other than Emerson Matsuuchi! Another wow! He describes the games as follows:

Metal Gear Solid: The Board Game is a co-operative “tactical espionage action” game that’s scenario-based, with each scenario having its own playing time, but with most of them in the 60-90 minute range. The game will include miniatures, but it’s not classified as a miniatures game. Hmm. We have absolutely nothing else on this game. Stealthy… 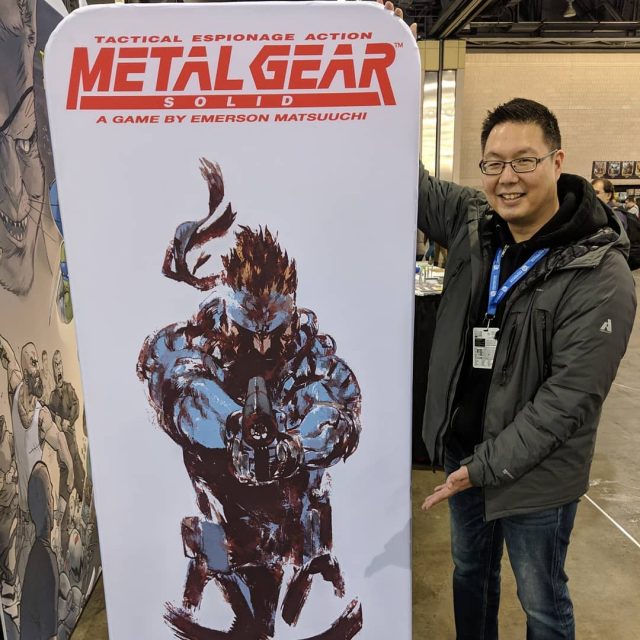 Clank! Legacy: Acquisitions Incorporated extends the deck-building fun of Clank! with legacy-style gameplay! Found your own franchise of the legendary adventuring company Acquisitions Incorporated, and shepherd your fledgeling treasure-hunters to immortal corporate glory over the course of multiple games. Your game board, your deck, and your world change as you play to create a unique campaign tailored to your adventuring party. Be cunning, be bold, and most importantly be ready to destroy most of your game. This is due out Q4 2019. 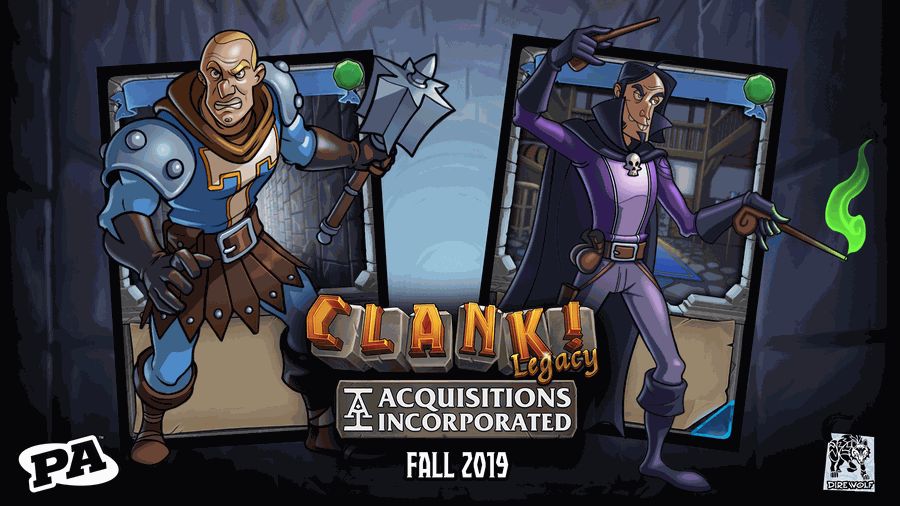 Now, this has us intrigued. We are not big fans of simultaneous play but this is looking top quality. The box art is also very easy on the eye.

Godsforge features simultaneous play, with each player attacking the player to their left and defending against the player on their right. On a turn, everyone simultaneously rolls four dice up to three times using standard Yahtzee rules, then each player lays one of their four cards face down in front of them. In any order you want, players reveal those cards, paying the cost of them via specific numbers on rolled dice, the sum of rolled dice, veilstones, or a combination of the above. On the dice, 1s can be any number you wish, while an unused 6 can be spent to acquire a veilstone. Spells provide one-shot effects, while creations go into play in front of you, with some of them providing one-shot “enter play” abilities in addition to possible attack and defence values and sacrifice abilities. Once all the cards have been resolved, players assess damage comparing their attack value against their target’s defence. You then ditch any cards you don’t want, then refill your hand to four.

Once a player is eliminated, everyone still in the game starts taking damage from them each round in order to hasten the endgame. 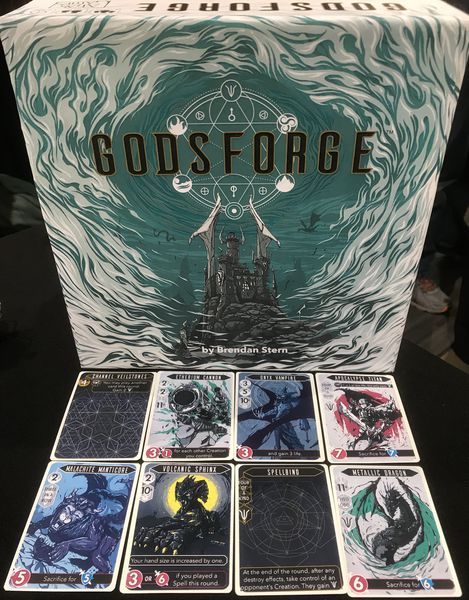 One for all you war game fanatics and history buffs out there.

Niepodległa, which is Polish for “independent”, is a board game published by Poland’s Institute of National Remembrance to celebrate the 100th anniversary of the rebirth of Poland. The game illustrates the events that led to the restoration of Poland’s sovereignty. This co-operative game played with dice and cards is for 2–4 players aged 12 or over and has two variants: basic, mostly aimed at education (30 minutes) and advanced for intermediate or experienced players (90 minutes). Nice to see this kind of thing in such games.

The scope of the gameplay are the events of the years 1910–1920 with an emphasis on the period between the outbreak of the First World War and the restoration of Poland’s sovereignty in 1918. The board represents the former and — eventually — the future territory of Poland. The players immerse themselves in the operations undertaken by the key characters of the battle for the independence; they try to spread the ideas of independence, seek a national consensus, and strengthen Poland’s position in the world. If they fulfil certain conditions, Poland will regain sovereignty in the grand finale in 1918. 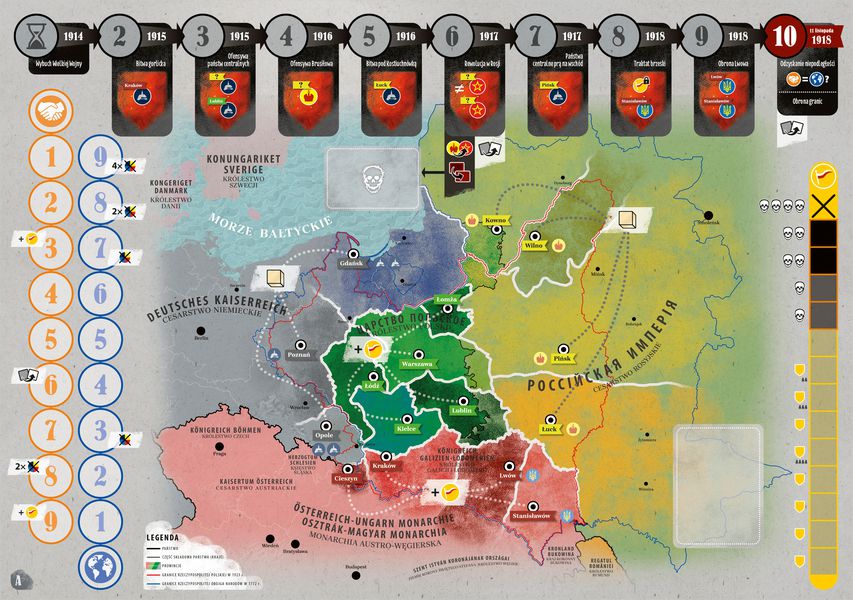 However, despite regaining independence, if the players fail to meet decisive challenges — the Peace Conference in Paris, the development of a new state administration, the struggle over Poland’s borders as well as the uprisings in Greater Poland and Silesia and the Poland-Bolshevik war — Poland may well cease to exist.

Niepodległa has 50 wooden pieces (including 19 special dice), 110 beautifully illustrated large playing cards and 24 smaller ones, as well as 88 cardboard pieces, 2 instruction leaflets (for both variants) and a richly illustrated booklet with a historical essay. On our watch list.

This weeks Kickstarter has already taken an insane amount of money. It’s currently sitting at $3.5 million! Their target was only $70k! Well done! There are still 18 days left in the campaign and we suggest heading over HERE to take a look. The game looks fantastic!

Designed by Krzysztof Piskorski (one of the most well-known Polish fantasy writers) and Marcin Świerkot (owner of Awaken Realms, developer of Lords of Hellas, Nemesis, The Edge: Dawnfall), Tainted Grail will bring you adventure, survival and exploration mechanics perfectly paired with character development and exciting combat and diplomatic systems. 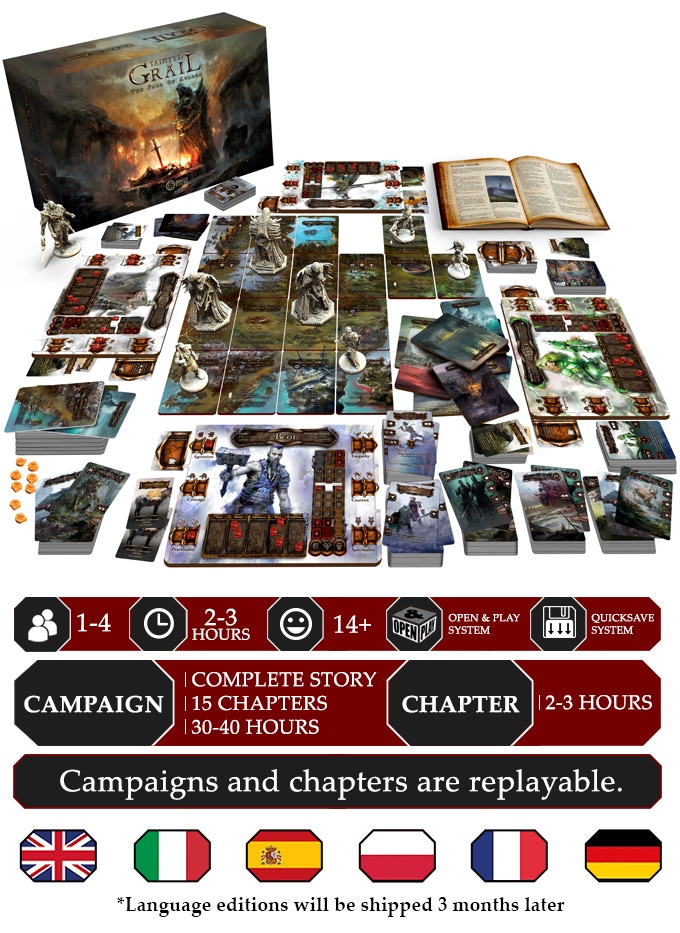 The game is built around immersive, story-driven exploration that will bring the world of Avalon to life, confronting you and your team with difficult choices that have far-reaching consequences. Over 100,000 words of branching story scripts provide many different paths to your goal as well as several different endings to your adventures!

This game looks incredible from top to bottom. The components and artwork are all outstanding. Must have Kickstarters only come along once in a while and this is one of those times! Hyped!

Quick and easy this week! See you next time!