New fighting games making their mark. Blood feuds reignited. A loser of a top 8 finals match end up taking home gold. This is but a fraction of what made this year’s Evolution tournament a blast to watch.

With the 2016 tournament done and dusted, it’s high time to single out which of these moments best encapsulates the spectacle and emotions from this high profile tournament. Whether it’s the last tournament of a fan favorite to the main attraction itself, you’ll find at least one or two moments on this list to rewatch and relive.

One of the first fighting games to have its final showing on the last day of EVO, Mortal Kombat XL’s tournament went out with a bang. Multi-talented character-user Dominique “SonicFox” McLean dominated the entire tournament with win streaks aplenty against all pros, with only Tekken Master’s Kotal Kahn being a slight hindrance to his win streak.

The big surprise? There wasn’t any Mileena used in the top 8, and the supposed top character in the game, the Alien, was brought out for just two games.

There were a lot of Killer Cuts on display at Microsoft’s fighting game counterpart to Street Fighter V.

Snapdragon’s first in an offline tournament and kicking ass all the way to 3rd place was also a highlight. But having Hollywood F3/Sleep and UA/Bass fighting each other with their repertoire of characters, with the former using the defensively-challenged Gargos to flood the screen with minions, is pure ecstasy.

The Final Marvel vs. Capcom 3 Tournament On EVO

ChrisG took home the well-deserved gold against last year’s champion Kane BlueRiver, all by using his tried-and-tested tactic of Morrigan’s Soul Fist Mirror Image combo. Even with that moment where ChrisG gets what’s due to him for all of his hard work, the whole top 8 was pretty insane. More so than usual as MvC3 is considered a hyperkinetic kind of fighting game experience, but we’re not complaining.

The hype for MvC3 was so real, that this shirtless guy wants in on the action post-tournament.

Not an actual match per se, but it’s a camera following the fighting game community’s biggest troll Martin “Marn” Phan. If anything, this showcased a slice of the fun and rollicking moments of the community enjoying themselves at each other’s expense. Why so serious, right?

PR Balrog is taking a risk using, well, Balrog in this SFV tourney. Luckily, the SFIV veteran was a force to be reckoned with, using the Shadaloo pugilist thanks to his good footsie tools, hard-hitting simple combos, and decent health. You can’t stray away from your roots, as this blitz from PR Balrog proves.

Remember EVO Moment 37? The one where US player Justin Wong got served thanks to Daigo Umehara’s parry spectacular? Well, the tables have indeed turned as Justin Wong gets to send Daigo home during the second day of the Street Fighter V’s pools.

This segment indicates that a totally new game in the EVO field will have its wild cards doing the unexpected.

Super Smash Bros. Melee Finals Is All Kind Of Puffed Up

Juan “Hungrybox” Debiedma went home with gold after multiple defeats and near-eliminations. And he’s using a dark horse throughout the entire tournament: a Pokemon called Jigglypuff who is considered a top tier character only mastered by experts in the field of smashery.

With nothing else but the mastery of his sole offbeat Pokemon, he was close to being eliminated by being pushed back to the loser’s bracket. But he persevered, defeating favorites like Joseph “Mang0” Marquez and finally taking down Adam “Armada” Lindgren, who was using a solid Fox McCloud in a tense yet well-paced set of matches.

If anything, the very first EVO Street Fighter V tournament was the last to shine bright, with too many moments to count.

This includes (but not limited to) the majority of Japan-based players dominating the Top 8s, sole American player LI Joe winning the hearts and minds of the crowd despite his upset, and the only Korean fighting game pro infiltrating the entire game with three perfect rounds in the very last match against pro player Fuudo.

That’s right: Seon-woo “Infiltration” Lee is your first-ever Street Fighter V world champion, attributing his victory via figuring out Fuudo’s game plan (see picture below for his actual summary). Until the next Capcom Pro Tour tournament happens, you are not going to witness a Street Fighter V tournament as nail-biting, heart-breaking, and ball-busting as this. 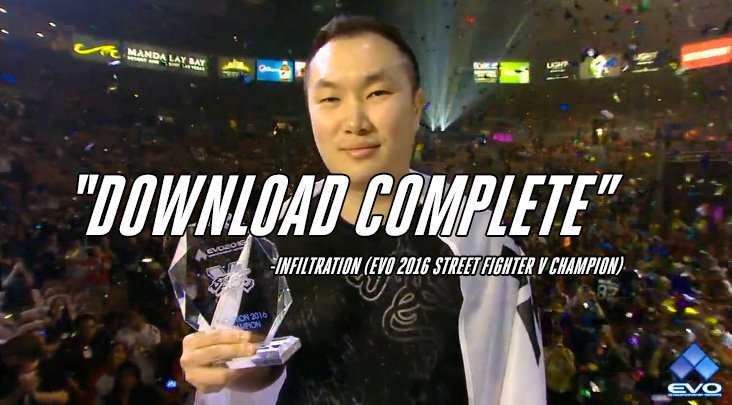 We have partnered with Evolve Pop Culture Expo in Perth