Last week, the Makuhari Messe convention centre brimmed with gaming euphoria thanks to the annual Tokyo Game Show 2015 expo. We had bigwigs like Capcom and Sony making their statements of intent at the hallways. We also had up-and-comers such as Cygames Mobage showing off the biggest game in Japan no one’s ever heard of. And then we had cosplay going on during the public days of the show floor.

Here are the most noteworthy Tokyo Game Show week news, from the games that stood out to other weird ones that follows.

New PlayStation 4 HDD bay colors! New VR developments! An old game announced in 2003 is now planned for PS4, and we honestly still don’t know what it is apart from it being inspired by Akira Kurosawa. Fans are getting that Gravity Daze sequel they have clamored for (and a remastered version of the first game to boot!).

This was all capped off with one of the better PlayStation ad campaigns tacked onto a major game show. Seriously, look at this stuff below!

The PlayStation Vita Is Alive & Kicking
Despite a no-show at E3, rumors of the Vita’s death & ignorance have been greatly exaggerated. In fact it is doing swell in Japan and Asia. There is now some love with 62 show floor titles like Odin Sphere’s Remastered Edition and SAGA Scarlet Grace, as well as new system colors too. Portable gaming has always been a staple of Japan’s videogame culture, and the Vita’s signs of life has proven that methodology despite its reputation outside of the country.

That Awesome Last Guardian Interactive Screen
This promotional tool is genius; akin to using cute cats to promote, well, anything. genDESIGN set up this display of a virtual interactive Trico from The Last Guardian. You walk past it and wave your hands and it will move alongside with you.

【TGS2015】→→ A life-size Trico, controlled by the same AI system as in the game, is waiting you. pic.twitter.com/ORtaRRYMBN

The most anticipated JRPG from Atlus is coming, but not as soon as many thought. That meant watching the game’s awesome trailer all the more unbearable. Still, good things come to those who wait.

So Is Kingdom Under Fire II For PS4 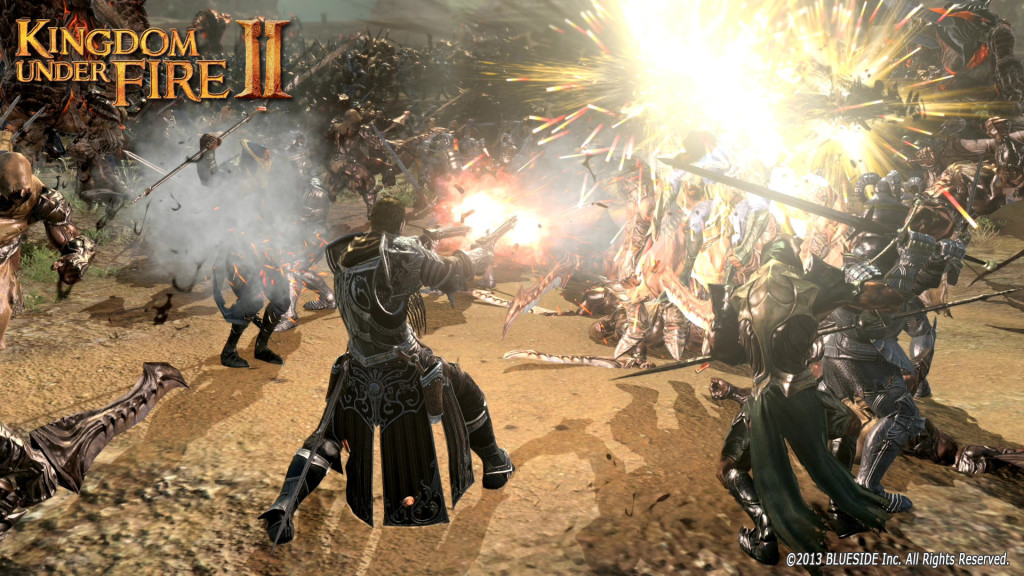 While not as well-known as a Persona title, this Korean MMO is still significant with its ambitious scale and scope. Most people would eat up a free-to-play Dynasty Warriors-type game with real-time strategy unit managing bits, especially in Asian countries. If you need your action RPG army-filled fix, why not play the PC version in the meantime? 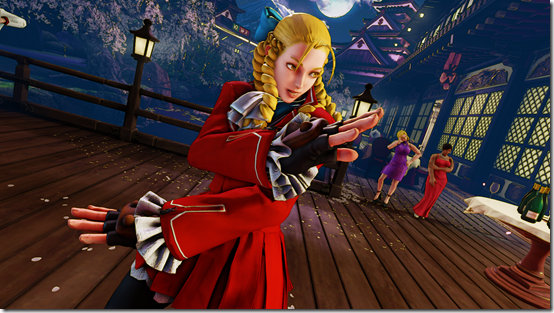 Everything from her graceful attacks & mix-ups to her trademark laugh are intact, with the sequel’s new V gauge giving her access to her fully-powered combo inputs. Capcom is finally listening to the fans. Here’s hoping we get Street Fighter III characters Urien and Alex into the mix too.

Customary of TGS, attendants get to hear about what’s going on with the latest Final Fantasy games. Apart from the fishing/chocobo-riding updates for FF XV and a grandeur display of FF XIV, players also get to see the first-ever trailer of the 2D 16-bit dungeon-crawling wonder Final Fantasy Brave Exvius. Take a look at the trailer below and see if you can recognize familiar Final Fantasy characters in an all-new-yet-kinda-old-school art form.

An Old Favorite Gets Animated! 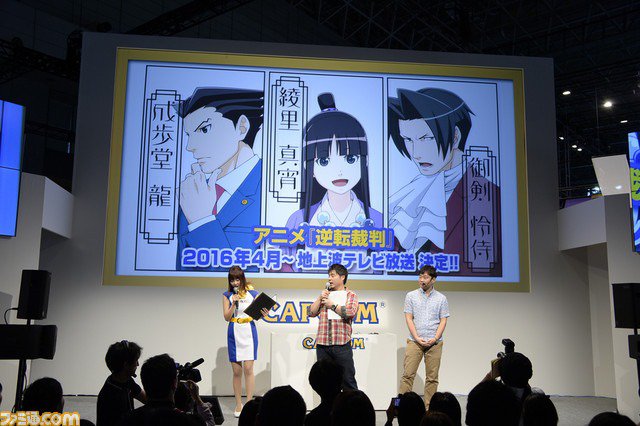 The Ace Attorney series starring the spikey-haired lawyer Phoenix Wright and his medium psychic Maya Fey will be an anime series starting from April 2016. Little else is known, but let’s speculate anyway. Will the anime recap the story from the first three Ace Attorney games? Will it be an entirely new story featuring the aforementioned veterans? Will Franziska von Karma look good with her whip in animation form? So many burning questions!

The red dot island had its slew of developers showing off their games at the Singapore Gamebox booth. Standouts include a game called Reel Blade that uses a “Ninja Track” device (presented above by producer Koh Chun Keat) which switches weapons with a touch of a button. 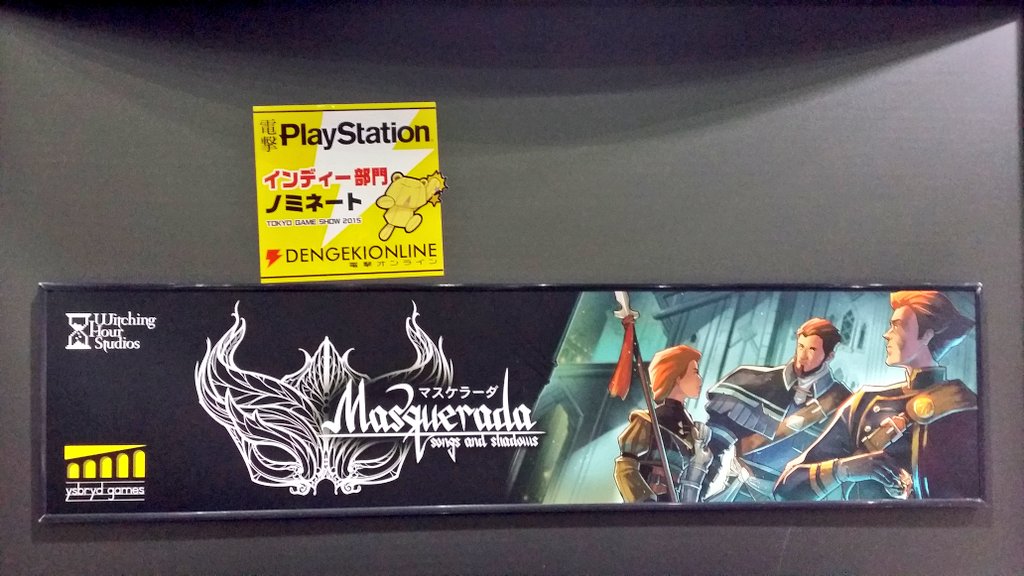 Also, Witching Hour Studio’s PC throwback to Baldur’s Gate called Masquerada was nominated for the Dengeki Online Indie Section. In the land where PC gaming usually plays second fiddle to their console brethren, being recognized in one of the country’s top gaming magazine is a huge feat. Great job!

Mobile Games > Everything Else 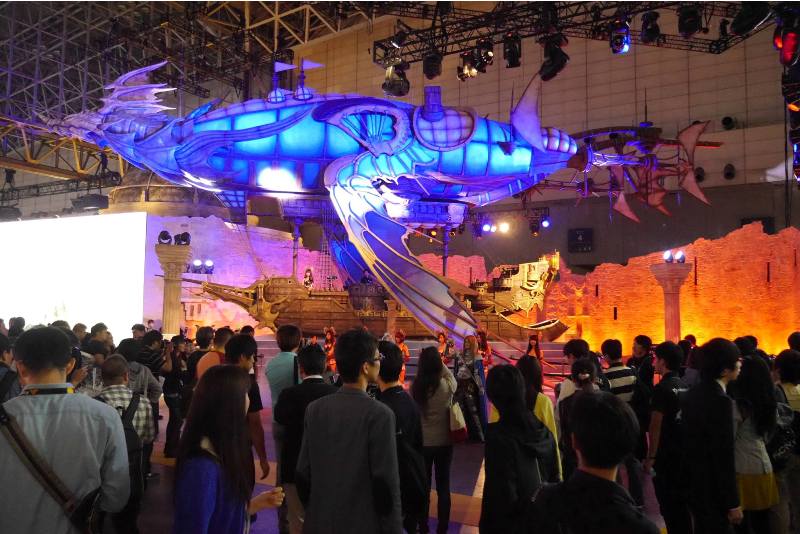 Like it or not, mobile gaming still reign as king at the TGS show floor.

In fact, mobile games publishers seem to be having an arms race of sort to outdo each other’s booth. Cygames’ Granblue Fantasy had a gargantuan giant airship at their booth. SuperCell made sure all attendees noticed their plethora of Clash of Clans characters suspended in mid-air.

We have never seen any of the big tier-1 publishers spending on such excessive promotions at previous TGS shows. So this year’s TGS is a stark reminder that mobile and its free-to-play model is still a big money spinner in Japan, and the publishers are not afraid to show it. 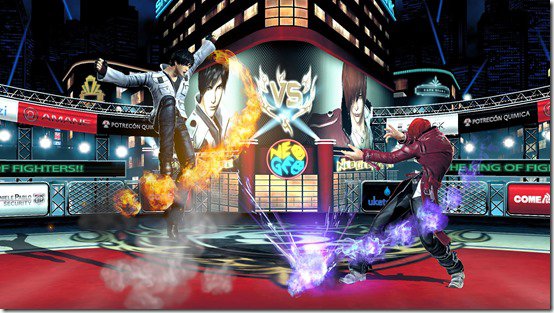 …and boy does it look terrible! What previously was a 2D-sprite animated wunderkind has now turned into a PS2 HD-quality title, at least at first glance. Time will tell if the game will live up to expectations, but right now it is not earning any love from veterans and fans of the series. We’ll just slip this YouTube likes/dislikes section of the official video page right here

All That Cosplay & Booth Attendant Pictures!

No TGS is complete without booth attendants dressed up to catch attendees’ attention to the games they are promoting. Troops of cosplayers were also in full attendance during the show’s public days. Here are a few out of the many who bedazzled the public and us (courtesy of Destructoid and Kotaku). 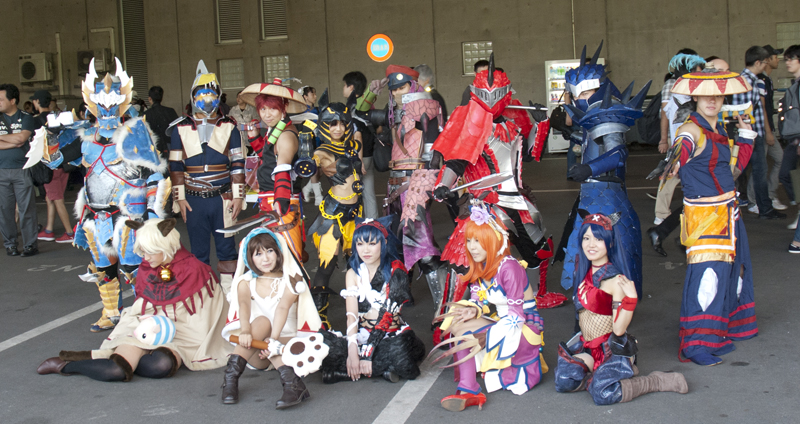 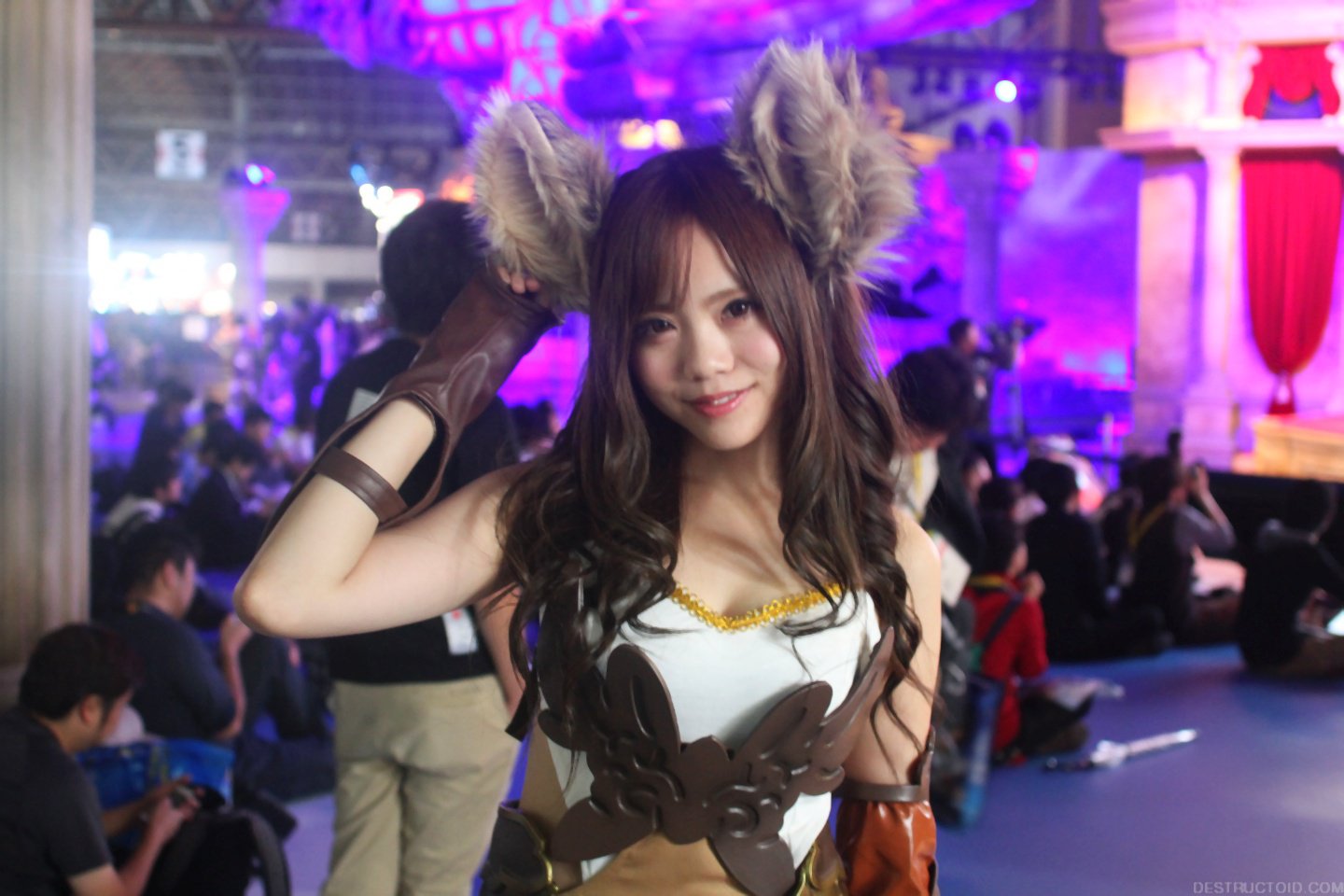 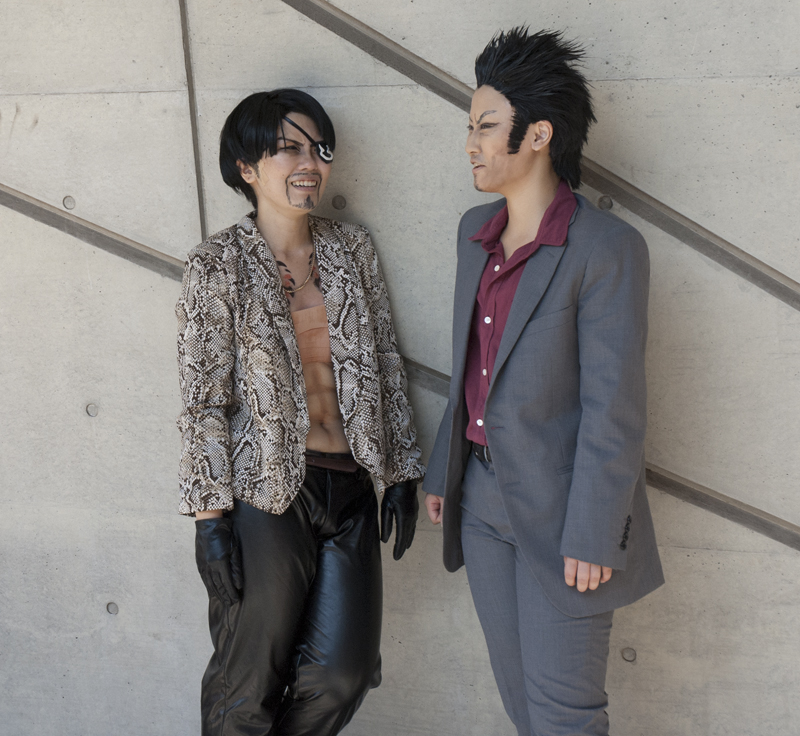 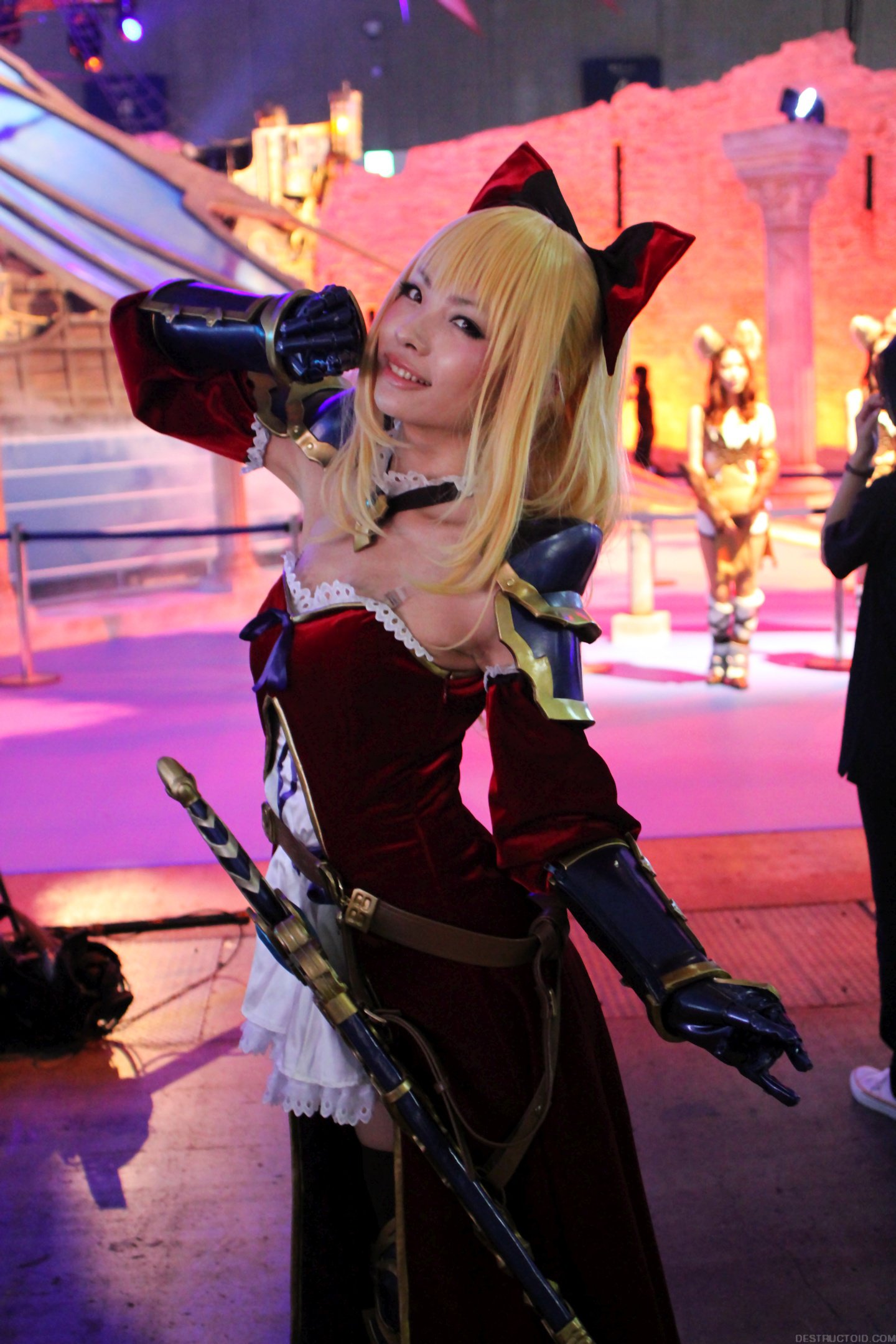