We are back and all rested from our visit to Gen Con! Tiring but a whole lot of fun! We saw a ton of games. We played a ton of games. Now we want to play all the games we saw! Here are the Top 5 that impressed us the most. 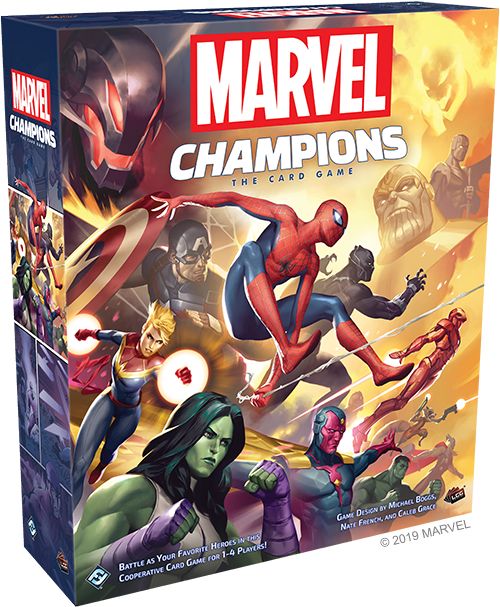 Fantasy Flight’s Arkham Horror is probably the best Living Card Game (LCG) out there at the moment. With the regular support it gets, the game just keeps on getting better and better. How do they top this? Easy. Marvel Champions. By taking the core elements of Arkham Horror and then improving various concepts around those elements, Marvel Champions is positioning to be the best LCG ever!

Iron Man and Black Panther team up to stop Rhino from rampaging through the streets of New York. Captain Marvel and Spider-Man battle Ultron as he threatens global annihilation. Do you have what it takes to join the ranks of these legendary heroes and become a champion?

Marvel Champions invites players to embody iconic heroes from the Marvel Universe as they battle to stop infamous villains from enacting their devious schemes.

As a Living Card Game, Marvel Champions is supported with regular releases of new products, including new heroes and scenarios every month. 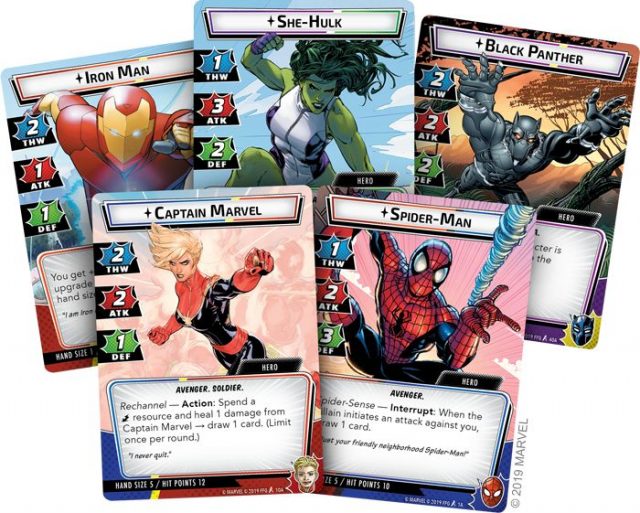 This wowed most people at Gen Con. A 1 to 4 player co-op just like Arkham Horror but with one consumer-friendly change. The core box supports 4 players! Yes. Unlike the previous LCG releases from FFG where you needed to buy 2 core boxes in order to play 4 players, Marvel Champions has you covered right out of the box. Once the game is out, it will be supported by monthly add on releases. New characters, new villains and new scenarios. From what we’ve seen and played so far this is shaping to be a fantastic experience, even for non-Marvel fans! 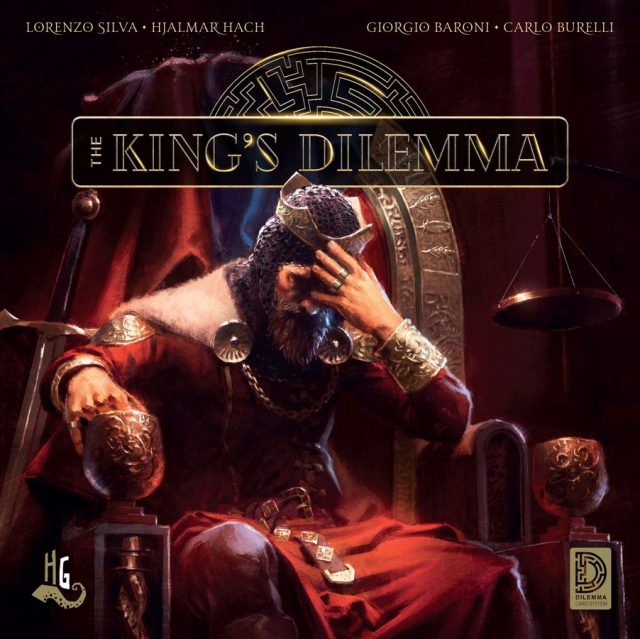 Wow! Wow! Wow! The King’s Dilemma is an epic Legacy game set in the ye olde times. Players are the heads of various houses and plan, subvert, plot and bargain over various dilemmas that pop up during the game. At its heart, the game is a discussion game. You will be talking a lot to your friends while you play. The Legacy aspects take it over the edge.

The King’s Dilemma is an interactive narrative experience with legacy elements, featuring several branching storylines leading to many possible finales and an evolving deck of event cards at its core. Players represent the various houses leading the government of the Kingdom of Ankist.

You will draw one card from the “Dilemma deck” each round and experience the game story as it unfolds. Each card poses a problem that the Council has to resolve on the King’s behalf. As members of the King’s inner circle, your decisions determine how the story proceeds and the fate of the kingdom. Each event happens only once: You discuss and bargain with the other players, then finally you make a choice, determining the outcome, progressing the game story, and possibly unlocking more events.

You have to keep the kingdom going, while also seeking an advantage for your own house; this power struggle may lead the kingdom into war, famine, or riot, or it could generate wealth and well-being. This will depend on your choices! The thing is, each decision has consequences, and what is good for the kingdom as a whole may be bad for your family…

Will you act for the greater good, or will you think only for yourself? 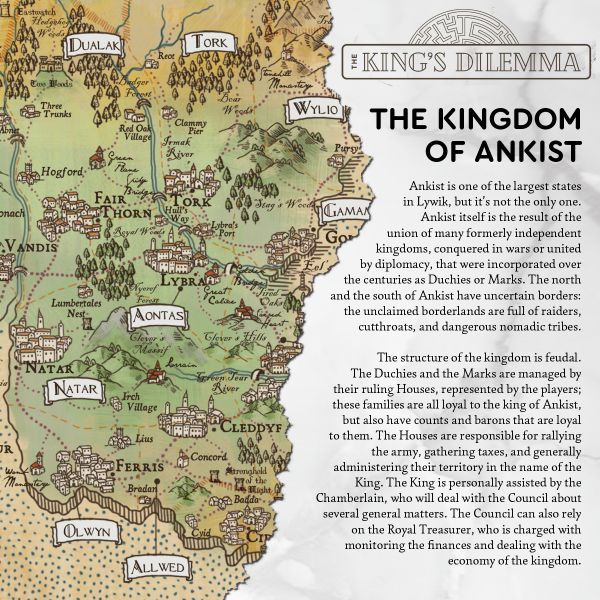 We can’t wait to play this. We love Legacy games and this one looks super interesting. You will need to play with a great group of friends to get the best out of this game. It supports 3 to 5 players and lasts around 15 to 16 games. After that? Throw it in the bin. Legacy style. You will need to roleplay a little in order to get your mindset into the time period the game is set in but it is recommended to bring your own personal beliefs and values to the discussions that will happen in order to get the most out of the game. Sounds really good. Hyped! 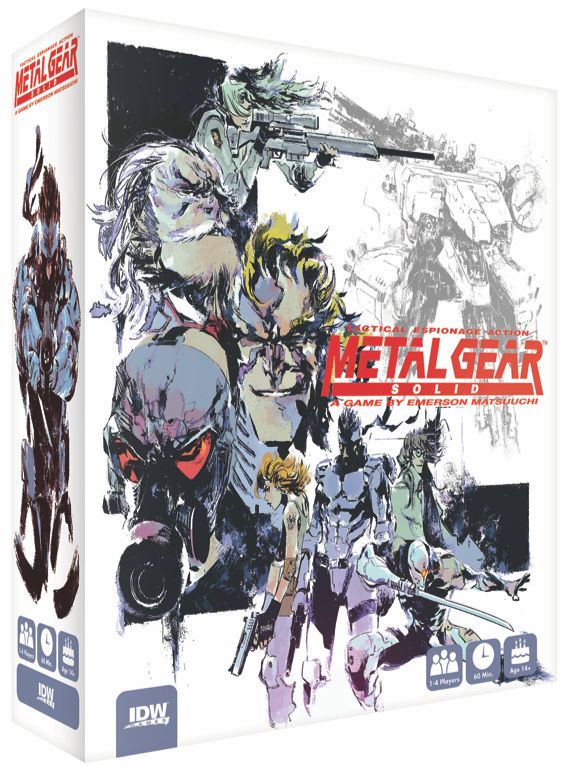 Ah. Finally. We have a Metal Gear Solid board game. It’s surprising it has taken this long. Games based on movies or video games usually tend to suck but there are exceptions. Hellboy, Jaws and Die Hard to namecheck a few. What sets this one apart is that Emerson Matsuuchi is the designer. Right there you know this is not going to be a cheap cash-in.

Metal Gear Solid is a fully cooperative, miniatures board game. Following the story of the first Metal Gear Solid video game, players take on the roles of Solid Snake, Meryl Silverburgh, Dr. Hal “Otacon” Emmerich, and Gray Fox the Cyborg Ninja and need to use their unique skill sets to avoid detection as they complete objectives across multiple campaign scenarios. Featuring a highly dynamic A.I. system and sandbox gameplay, missions can be completed in multiple ways and always play out differently. 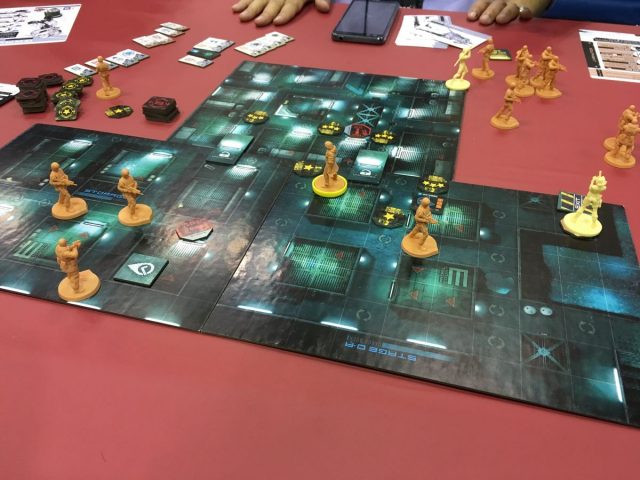 What we saw of the game at Gen Con was fleeting as it was nigh on impossible to get to the demo booth to see it. We are talking packed 24/7. What we did catch was it looks to be a solid dungeon crawler type game. The miniatures are great and the modular board harks back to the original PS1 game. Pretty cool. It’s supposedly out this year but don’t hold your breath. They need to finish that 3000-page script book… 😛 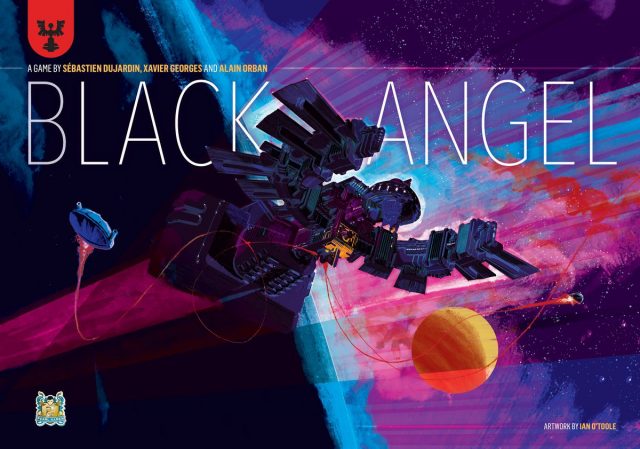 We have written quite a bit about Black Angel over the past couple of months and now we have finally played it. It’s fantastic. If you have played Troyes, then you know exactly what this game will deliver in terms of dice mechanics and player action but it adds a whole lot of new stuff. Plus it’s in space! With spaceships and stuff.

Humanity, through its irresponsible behaviour, has exhausted the natural resources of Earth, making it almost uninhabitable. In a burst of lucidity, pressed by the irreversible degradation of your planet, the great nations are forced to put aside their differences and share their knowledge in order to create the most vast spacecraft ever constructed. Thus, the Black Angel project is launched.

The Black Angel, the first intergalactic frigate in history, must transport the genetic heritage of humanity beyond known worlds, over a journey that is likely to last several thousand years. Her crew will be composed of only robots. Because no nation is willing to trust the creation of the AI (artificial intelligence) that will control this crew to any other nation, a compromise is found: The Black Angel will be co-managed by several AIs, and the utility of each decision will be evaluated in VP (Validation Process).

At the completion of this long and perilous voyage, when a new inhabitable planet has been reached, the AI that has earned the most VP will be entrusted with reawakening Humanity and overseeing its new start….

All the reports are in agreement: The Black Angel is approaching Spes, a planet with the highest probability for habitability by the human species. Take advantage of our approach to maintain the good relations you have gradually woven with the benevolent Alien species populating the galaxy, and watch out for the dreaded Ravagers, who would do anything to prevent you from reaching Spes. 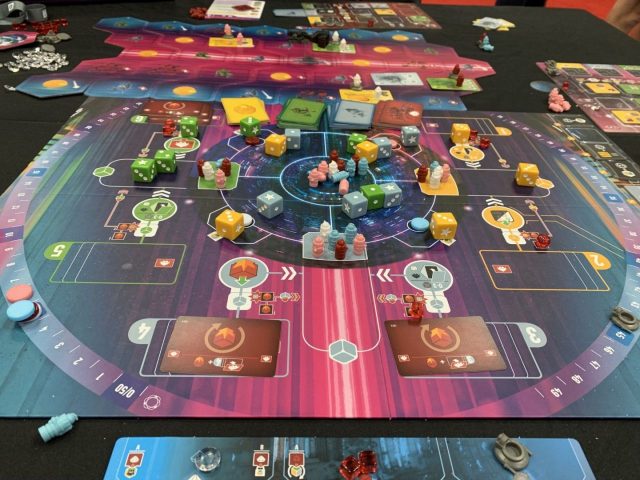 Out of the box, it’s a beautiful looking game. The art and components are all top-notch and it plays very smoothly. It takes up a lot of space though! A true table hog. 4 player boards. The main board. The space board. Card decks. Just be prepared to not have enough space. So what do you do in this game? It’s a points race! The player with the most VP at the end wins of course. Players will spend dice at the various locations on the board to do that action X number of times depending on the value of the die. It’s a wonderful system. You can battle aliens on your ship, repair your ship, send out scouting ships to the surrounding planets and buy upgrades for your A.I system. The possibilities are endless. Look out for a full review soon! Yes, we managed to snag a copy of this game before it sold out! 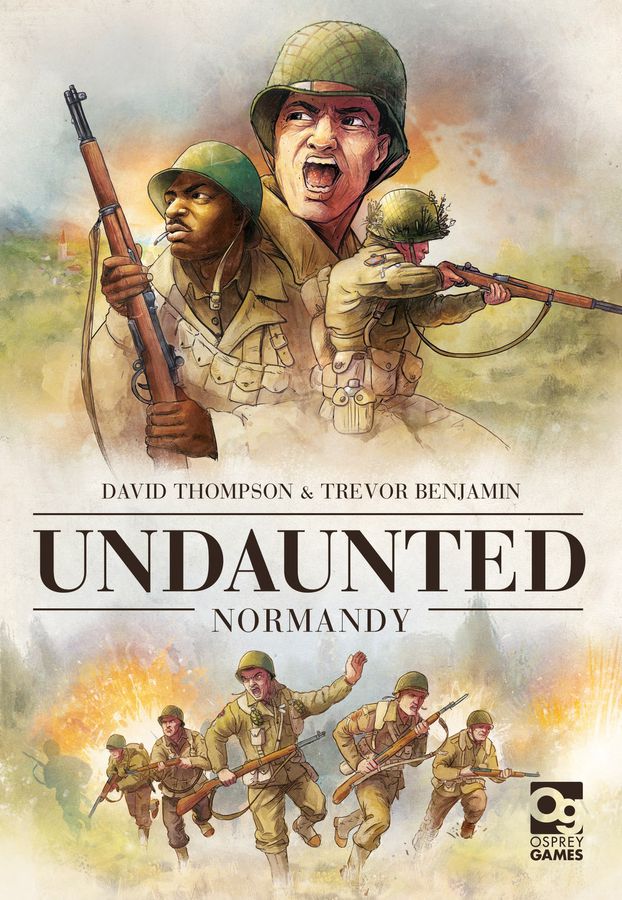 This was a huge surprise for us at Gen Con. A wonderful 1v1 wargame that plays in under an hour and features deck building as the main mechanic. Count us in.

June, 1944: Through the D-Day landings, the Allies have seized a foothold on the beaches of Normandy. Now you must lead your troops forward as you push deeper into France and drive the German forces back. You will face intense resistance, machine-gun fire, and mortar bombardment, but a great commander can turn the situation to their advantage!

Undaunted: Normandy is a deck-building game that places you and your opponent in command of American or German forces, fighting through a series of missions critical to the outcome of World War II. Use your cards to seize the initiative, bolster your forces, or control your troops on the battlefield. Strong leadership can turn the tide of battle in your favour, but reckless decisions could prove catastrophic as every casualty you take removes a card from your deck. Take charge amidst the chaos of battle, hold fast in the face of opposition, and remain undaunted. 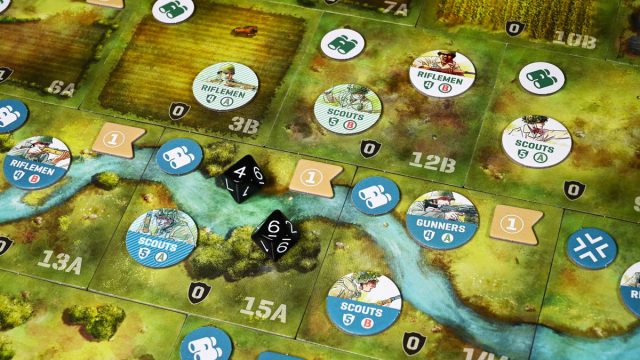 This really is a wonderful game from top to bottom. Components. Art. Gameplay. Everything. We are in love. It plays super easy but offers a ton of depth and strategy. You play as either the German or the American forces and you battle for control points on the map. Once you control the number required, you win the game. There is a campaign that players can play through and you can also randomly setup skirmishes with your own end game goals. The deck-building mechanic to order around your troops in battle is fantastic and combat is handled via dice. Simple but effective. Look out for a review of this one too!