What games were we hyped for this year and then were crushed by how disappointing they were once they hit the table. Our Top 5 of disappointments! 🙁

Detective: A Modern Crime Board Game brings classic, card-based, puzzle-solving gameplay into the 21st century with the introduction of online elements. You will gain access to the online Antares database that contains data about suspects, witnesses, and documentation from arrests and trials related to your case. Use every tool at your disposal to solve these crimes – consult the Internet, check the facts and constantly discover new clues. You are not playing a detective; you ARE a detective! 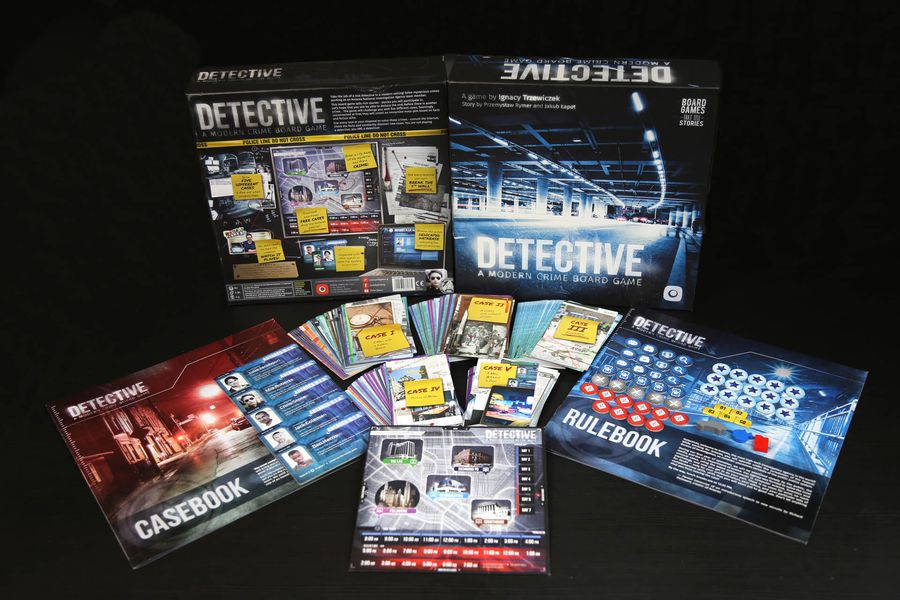 What an utter disappointment this was. At its core, the game is fairly ok. You solve crimes by visiting locations and digging through the card deck and working out what is going on. You also have access to an online database where you can log clues and try to get matches for the various strands of information you have collected. You can also search the real world with, for example, Google for more information on clues. This sounded all pretty snazzy and it was to a point. We were fed up after the first case and never played the rest.

Why? The writing in this game is terrible. Whenever you had to read a card, probably 85% of the text was fluff. It got old very quickly and everybody just skipped to the end without reading it out aloud which killed the immersion. The online database that was meant to help you was more hindrance than a help. It was just confusing and poorly implemented. The whole thing just didn’t gel very well. If you are looking for a crime game that does the same thing but a whole lot better, then give Chronicles of Crime a go.

Western Legends is an open-world sandbox tabletop adventure for 2-6 players set in the American Wild West. Players assume the roles of historical figures of the era, earning their legendary status in a variety of ways: gamble, drive cattle, prospect for gold, rob the bank, fight bandits, pursue stories, become an outlaw, keep the peace. The possibilities are darn near endless. 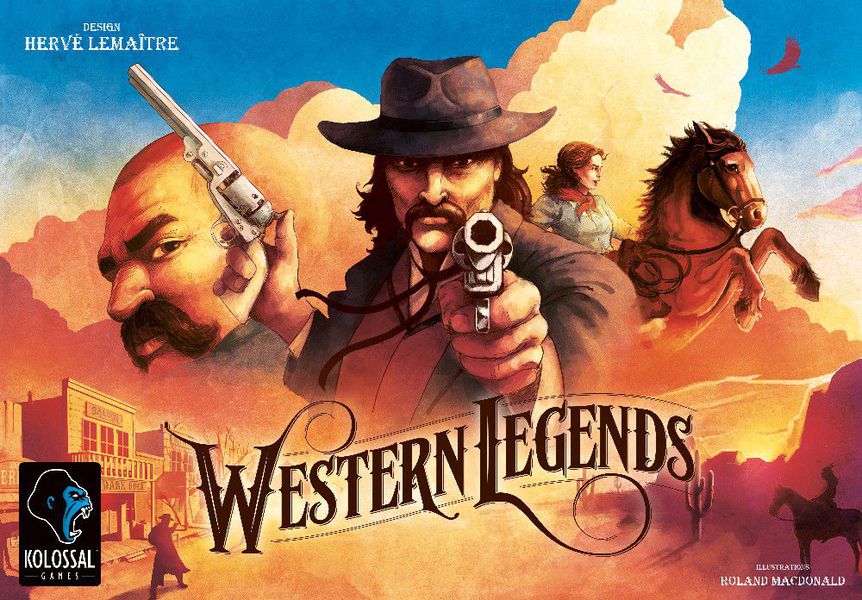 This was promoted as an open world do whatever you want type of game and it sounded super interesting. Do whatever you want in a Western-themed game? Awesome! In the end, it died facedown in the dirt outside a grimy saloon. Sadness. The game is beautiful. No doubt about it. The art and the components are just wonderful and they bring the theme to life and that’s about it. The main gripe about this game is the Poker system that runs the game. Yes, it’s thematic and fun for the first few turns but once it dawns on you this is how the whole game is run, you feel the need to take a few swigs of moonshine.

Then the go anywhere, do anything mechanic of the game is a severe letdown. Yes, you can go anywhere on the board but the do anything part is a little over hyped. You basically can do the following. Pick and deliver cattle. Mine for gold. Fight bandits. Rob banks. Play Poker. That’s it. In the end, it’s just a race up the VP tracker and take out the theme and basically, you are playing high card wins. You can do that with a regular deck of cards…

In The River, you and the other mayoral players each struggle to create the best pioneer settlement by developing land along a river bed in your town, collecting resources from the area, and constructing buildings. As you explore and build up the untouched frontier, your workers will settle down along the way, meaning that your other workers will shoulder more of the burden to do what you want to do, which includes making nicely organized landscapes to please the aestheticians in town.

Having seen the previews and watched the playthroughs we were looking forward to this. It hits all our favourite buttons. Resource Collection. Worker Placement. Tile Placement. A sure win. Then we played it… The River is by no means a terrible game. It’s just so very….simple. We didn’t expect a super heavy game but we expected more. This is definitely aimed at the casual crowd and for those just getting into say Worker Placement games. So if you love games such as Raiders of the North Sea, Agricola and Champions of Midgard, stay far away from this. We learned a hard lesson with this one.

You awaken with a splitting headache and no idea of how you got here. The wilderness stretches in every direction, and something howls in the distance. Your quest for answers will have to wait; first, you need to survive. Will you help the others that are stranded here or will you save yourself at any cost? When two to four players find themselves marooned in the harsh wilderness, you must cooperate and compete to search for water, food, and tools that will be essential to your very survival. But your adventure holds many secrets…. 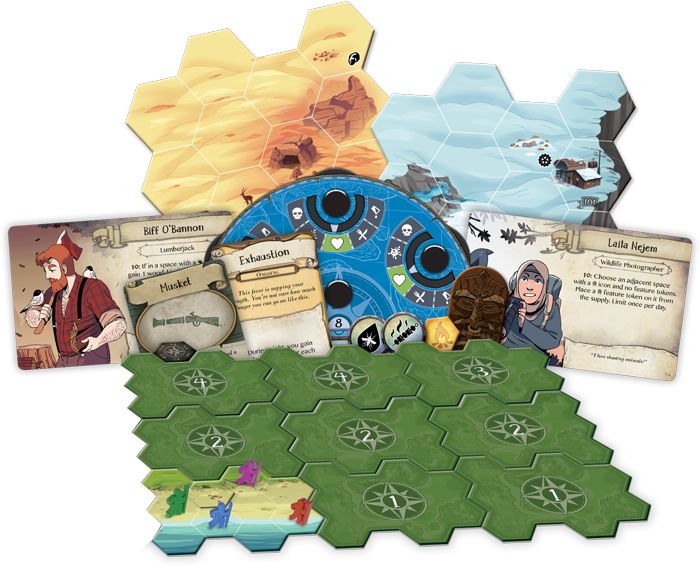 Fantasy Flight’s second Unique Game after Keyforge sees the system being used in a standard board game setup rather than a card game. Does it work? No. There is no reason for every single copy being different other than to make money and have a great marketing gimmick. It doesn’t help that the game feels incomplete also. There just seems to be something off about it. The game is an exploration game that falls flat most of the time because, well, it’s dull as dishwater. The stories the game tries to tell are instantly forgettable and for our copy, the encounters just didn’t match the scenarios we were playing.

We got frustrated with how poor the exploration is in this game, especially when it’s an exploration game! With limited locations and terrain tiles, the game has hardly any replayability. The only way to expand the game? Go buy another copy and hope you get different tiles and terrains. The only plus here is that the artwork is fantastic. If Fantasy Flight had maybe built a big box core game and then introduced the Unique Game aspect to the expansions it would have worked a little better.

Big Trouble in Little China: The Game sends you and up to three other players on a wild adventure to experience the unknown and mystical underworld of Chinatown. Each brave character uses their own unique talents and abilities to take on various missions throughout Little China; working together to gain enough Audacity to take down Lo Pan, the Three Storms, and a slew of other powerful henchmen, in this cooperative, replayable, cinematic experience. 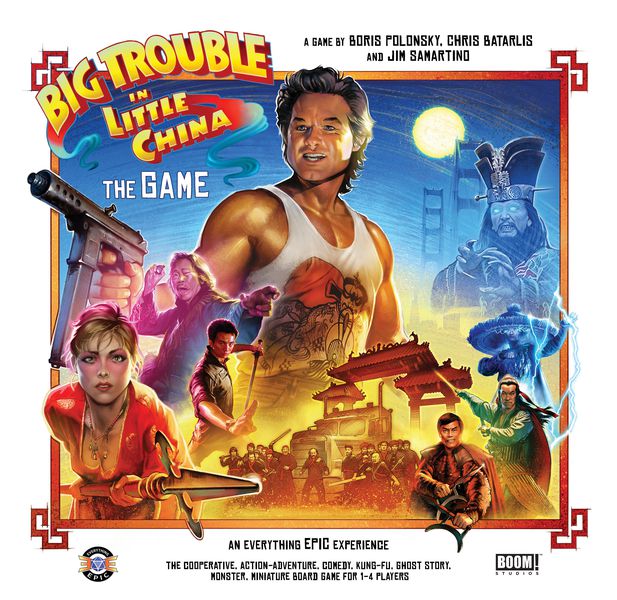 What a massive letdown. After waiting almost a year to get our sweaty hands it, after one play we were disappointed. After two, we were done. Let’s get what’s we liked out the way first. This is a nice looking game. From the miniatures, cards, dice and the board, everything is wonderfully recreated from the film. It is without a doubt the best film to board game adaptation we have seen. But where does it fail? The game is a co-operative game that sees players completing quests and fighting monsters to level up and progress to the main fight with the big boss. This is done on the reverse side of the board. A pretty cool setup.

The first time you play, its fun. But then you start to notice a few things. There isn’t much replayability per se. Yes, there are multiple missions per player. But they play out the same. Start location. Encounters. There is nothing to randomise the events. When enemies spawn in general to harass you on the streets, they will spawn in the same places also. The game gets very predictable. It is also either very hard or too easy. There is no middle ground. There are multiple typos on cards that can be confusing and can stop the game dead. Maybe we were expecting a different type of game but in the end, this is a co-op dice chucking game with little tactics and the need for a whole lot of luck. Everything Epic is a great company and their recently released Coma Ward is a much better game than this because maybe it’s not weighed down by an IP and our nostalgia.