Christmas and the New Year. Lots of eating. Lots of drinking. Lots of fun parties. One of the best ways to liven up a gathering is a party game, so gather your friends, grab the booze and make sure you play one of these over the holiday period.

We’re doomed! The world is coming to an end! We must act now to survive!!! Players are the most powerful leaders in the world working alongside up to nine others to build a starship. Time is short! The goal? Build and be on a starship that escapes a dying world — or betray everyone to ensure your own survival. No seats on the starship are guaranteed. We’re Doomed! is a quick, timed, panic-inducing game of international collaboration, retaliation, diplomacy, conspiracy, and blowing each other up for fun!

It is not the 11th hour. It is the final hour. Do we have time? How many seats will be available? Who will get a seat? Will the ship even get completed? During the Action Phase, players take one action in turn order to produce or steal either Resource or Influence tokens. Resource tokens are used to build the escape ship. The bigger the ship, the more players can escape to victory at the end of the game. Influence tokens determine who boards the ship first at the end of the game. Each civilization is better at one of the standard actions.

During the Contribution Phase, there is no turn structure. Players can negotiate as they pledge their Resources to building the escape ship by contributing Resource tokens. The player who contributes the most Resources is awarded 1 Influence and gets to draw the event card for that round. Each card is one of one hundred unique and ruthless event cards that change the game drastically — introducing new restrictions, secret missions, ethical dilemmas, physical challenges, robots, aliens, lizard-people and more. The player who drew the event card then takes an action, starting the next Action Phase. The game continues in this fashion (actions, contributions, event) until time is out!

After 15 minutes, play stops. Time to board the starship. Who gets in first? The players with the most Influence board the ship first. Once full, the ship launches and the remaining players are left behind to die. Beware! Resources can also be used to nuke a player, completely eliminating them from the game, so watch the other players’ Resource token stockpiles!

Witness humanity at its worst and finally come to terms with the truth you have known all along — we’re doomed!

We’re Doomed! is a lot of fun, especially with higher player counts and games are capped at 15 minutes each which is great. The event cards add a very silly dynamic to the game but be warned if you play with some people who are not so outgoing or shy and easily embarrassed, then you might have to skim through the deck and remove a fair few. Or you could just not player with that person… 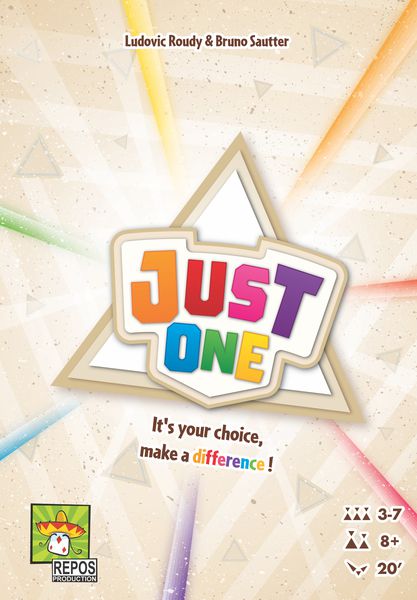 Just One is a cooperative party game in which you play together to discover as many mystery words as possible. Find the best clue to help your teammate. Be unique, as all identical clues will be cancelled!

You have the choice – make the difference!

Another easy game to learn and play. The first player will draw a card without looking at it and place it on the card stand facing the rest of the players. They will then randomly say a number from 1 to 5 which will correspond to a word on the card. The rest of the players will secretly write a one word clue that will correspond to that word. All players will reveal and the person who placed the card will then have to guess what the word is. Scoring and penalties are as described as above. A fantastic party setter game. Best with booze. 🙂 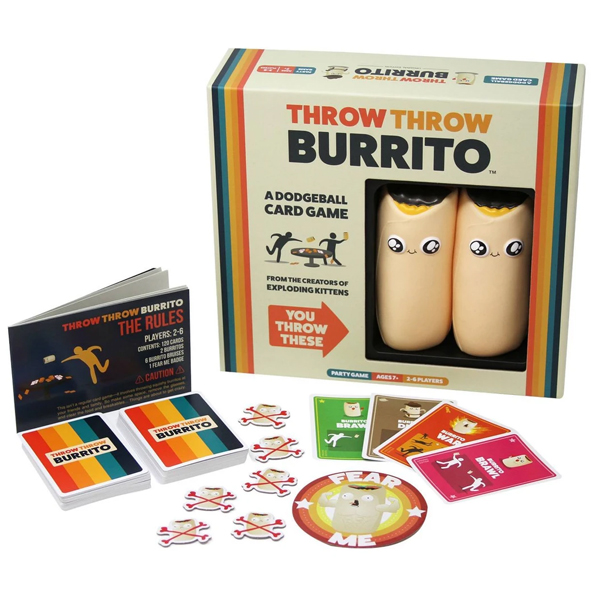 Throw Throw Burrito is what you get when you cross a card game with dodgeball. Try to collect matching sets of cards faster than your opponents while simultaneously ducking, dodging, and throwing squishy airborne burritos. The cards you collect earn points, but getting hit by flying burritos loses them. So clear some space and put away the antiques, because you’ve never played a card game quite like this before.

How it works: Place a pair of burritos on a table and draw cards. Keep your cards a secret. Rack up points by finding sets of three in the deck. Find matches before anyone else does. If someone plays Burrito Cards, a Battle ensues. Steal points from your opponents by hitting them with squishy toy burritos. Declare war on your friends. Some battles only involve a handful of players. Others force the entire table to engage in a Burrito War. Duel to determine the winner. During a Burrito Duel, two players must stand back to back, walk three paces, and FIRE.

No introduction needed for this one. Play cards. Throw stuff at your friends. Easy and fun. The only downside to this one is you need a good space to play it.

The Sorcerer is out to get you! Find your way among the illusions, but beware of the traitor in your ranks!

The Grimoire guides their team towards the exit using images, upon which they point at certain details. Working together, the other players have to find the exit as quickly as possible while avoiding picking the wrong cards. However, a member of the team is a traitor looking to lead the other players astray. A wide variety of traps are on your way to the exit of the library, making player communication harder!

Obscurio is a family/party game, an original mix between an image-based communication game and a secret role game in which the players have to be careful when sharing ideas with their team. Supported by rich contents, Obscurio proposes a fresh new experience in its genre by putting the emphasis on the details of the images and the constant doubt created by the presence of the traitor.

Communicate efficiently and avoid the illusions on your way to escape the Sorcerer’s library!

A wonderful game to get to the table for up to 8 players. Easy to learn and easy to play. This is like Mysterium but with an added traitor mechanic. On the surface that sounds terrible, just us, it’s not! It adds a really fun dynamic to the game. Plays in about 40 mins which is a little long for a party game but this can be easily overlooked as it’s so damned fun! 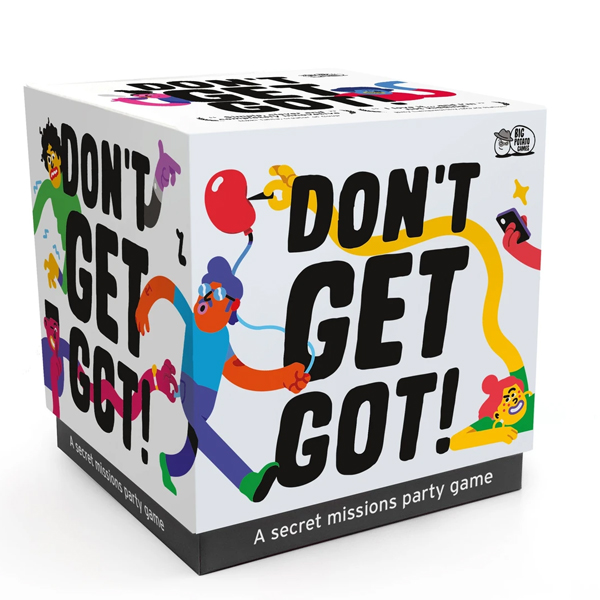 Don’t Get Got! is a party game in which each player receives six secret missions. The first player to complete the most at the end of the game session, wins!

Not much of a description right? But this is an immense game! First things first. You don’t actually sit and play at a table. The game runs in the back ground of whatever you are doing. In the office, on a plane, playing other games etc. It can last a day, a week or even a month. It’s up to the players. At the start, players will get a wallet and then randomly pick 5 challenge cards making sure nobody else sees them. The 6th challenge card is the same for everybody and is not private of course.

Once everyone has their wallet filled with the 6 cards, the game begins and they all have to try and complete the missions listed. If they succeed, they flip the mission to green and if fail they flip it to red. Players with the most green at the conclusion wins. But how do you fail? If a person gets wind of your plotting to get them to do something, they can say “Is this part of the game?” If it is, you fail the mission. If it’s not, the person who asked fails a random mission in their wallet. This makes asking a dangerous proposition as you have to be sure that “it’s part of the game” when you open your mouth. But the other player also has to be on top form to make it look like it’s not part of the game. 🙂

When you succeed at a mission, it should be verified with the other players. When you fail a mission, you can tell the person who busted you what it was so they can verify if you cheat and try it on somebody else. Not that you would cheat. But as a warning, if you don’t play with a good group of friends, this game is wide open for a whole load of cheating. Boo to those type of people.

Hope you all have some great parties over the next few weeks!