There’s nothing quite like a good old party game. They are easy to learn and a whole lot of fun to play. If you have the right group of people playing (and include copious amounts of booze) then things will probably get insanely ridiculous pretty quickly. Party games need a good group of friends to play. If the group doesn’t gel or some are socially awkward then the games can fall flat. So grab those friends that don’t mind making a fool out of themselves, get some booze (if needed) and let’s take a look at 5 of the best!

Say Anything is a game about what you and your friends think. From the get-go, to get the best out of this game, you need to play with people you really know. We mean it. REALLY know!. All the darkest details…

On your turn, you draw a card and then select a question from it. For example, “What is the worst thing you have ever bought?”. The rest of the players will write on their answer boards and place it in the middle of the table face-up as quickly as possible. No duplicates are allowed in this game. So you have to be fast! Players will then bet on which answer the question giver will choose. 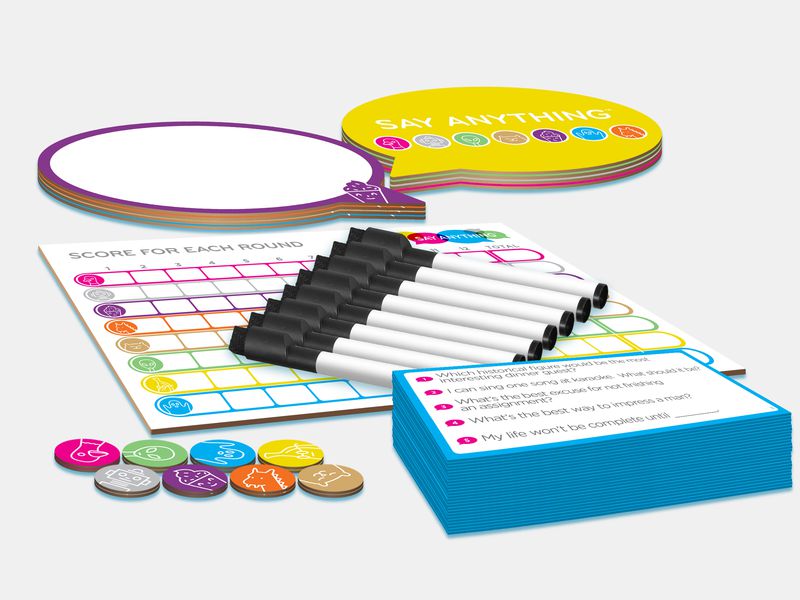 It’s a super simple game that is a ton of fun. As mentioned earlier, the more people know about each other the better it is as you can have some hilariously specific answers and everybody will probably give answers that could be correct. This leads to crazy voting rounds where players have to choose from several fantastic options. A great way to start or end a party/game night.

There’s been a murder. One of the players at the table did it. There could be an accomplice too. A witness maybe. We need to get to the bottom of this.

In the game, players take on the roles of investigators attempting to solve a murder case – but there’s a twist. The killer is one of the investigators! Each player’s role and team are randomly assigned at the start of play and include the unique roles of Forensic Scientist, Witness, Investigator, Murderer, and Accomplice. While the Investigators attempt to deduce the truth, the murderer’s team must deceive and mislead. This is a battle of wits!

The Forensic Scientist has the solution but can express the clues only using special scene tiles while the investigators (and the murderer) attempt to interpret the evidence. In order to succeed, the investigators must not only deduce the truth from the clues of the Forensic Scientist, they must also see through the misdirection being injected into the equation by the Murderer and Accomplice!

Find out who among you can cut through deception to find the truth and who is capable of getting away with murder! 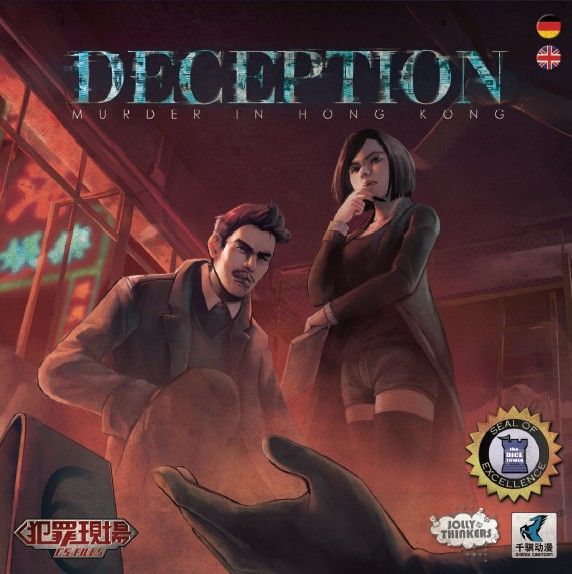 Deception: Murder in Hong Kong is a great large group deduction game that again is much better when you play with people you know really well (this is going to be a common theme). We are not going to go into the fine details of the game as going into depth on all the roles is a separate article in itself. What we tell you is that you will have a lot of fun playing this. As the clues slowly get revealed, more information about the location and weapon used is potentially revealed to the group. All good. Maybe. You glance down at your collection of cards and realise you look guilty as hell. You need to make a case that it’s not you and deflect back the suspicion to somebody else…

The social interaction between all players in the game is the best part. You talk through the clues, you defend yourself against wrongful accusations, plead innocence in the face of overwhelming evidence and do your best to implicate somebody else in the crime. Couple all this with the various roles and you get a wonderful group game that can be played in 20 minutes or less.

Ah. Where would a party game list be without Secret Hitler. A game of political intrigue and betrayal that could go terribly wrong at any moment. Especially if alcohol is involved…

Players are randomly and secretly assigned to be either a liberal or a fascist, and of course, one player is Secret Hitler. The fascists must coordinate to sow distrust and install their cold-blooded leader and the liberals must find and stop the Secret Hitler before it’s too late.

At the beginning of the game, players close their eyes, and the fascists reveal themselves to one another. Secret Hitler keeps his eyes closed, but puts his thumb up so the fascists can see who he is. The fascists learn who Hitler is, but Hitler doesn’t know who his fellow fascists are, and the liberals don’t know who anyone is. 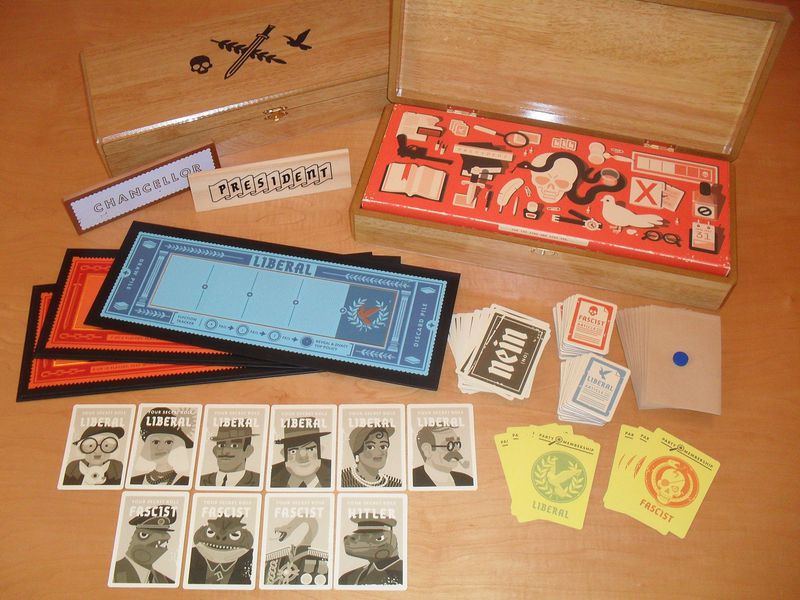 Each round, players elect a President and a Chancellor who will work together to enact a law from a random deck. If the government passes a fascist law, players must try to figure out if they were betrayed or simply unlucky. Secret Hitler also features government powers that come into play as fascism advances. The fascists will use those powers to create chaos unless liberals can pull the nation back from the brink of war.

What great game for a party. Do you trust your friends well enough to play this game? A super fun game for large groups, it hits many high spots. Deduction. Social interaction. Lying. Scheming. Just don’t drink too much when playing this game. It could lead to some very unfortunate outcomes. Very funny ones. But unfortunate. Like a fascist assassinating Hitler by mistake as the rest of the fascists looked on in horror…yeah that happened.

The number of times this game reduced the entire group to tears of laughter is…every time we play it. A classic party game.

Each player begins by sketching a word dictated by the roll of a die from the card given to them at the beginning. You are given 90 seconds to draw what is listed. Once the time is up, all players, all at the same time, pass their sketch to the next player, who must guess what’s been drawn. Players then simultaneously pass their guess to the next player who must try to draw the word they see and so on. Once the booklet is returned to the starting player, they will go through each panel and see how the drawing and descriptions evolved. 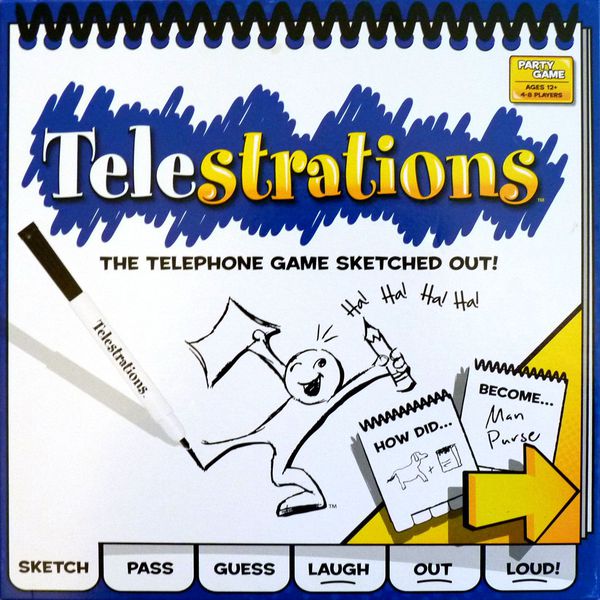 We have never had a single game where we got anything correct and that is fine. We had a fantastic time playing. It’s amazing to see just far off track people can go by bad drawings or poor descriptions. This would have easily been at the top spot if not for…

Simple and brilliant. The Chameleon is easily the best party game we’ve played in a long time. A bluffing game at heart but it is oh so much more.

A topic card containing 16 related words to the topic is then placed out face down and 2 dice are rolled. The dice result is compared to the codes on the card and then players flip over the topic card which gives all players apart from the Chameleon – the Secret Word. So depending on who you are the following happens:

You are the Chameleon. No one knows your identity except you. Your mission is the blend in, not get caught and to work out the Secret Word.

Players must now go in player order around the table and say a word that relates to the Secret Word. The thing is you can’t be too obvious or the Chameleon will be alerted to the word. If you are too vague, players will think you are the Chameleon. If you pause or stutter, it’s viewed as suspicious. Argh! As the Chameleon, you have no idea on what the word is and must make a formulated guess when listening to other players. If you are in the unfortunate position of going first, then good luck!

Once everybody has said a single word it goes to the discussion phase. This is where your word is viewed under a microscope. You need to explain why you said the word you did. Players will then vote who they think the Chameleon is.

There are a ton of topic cards included in the game but the greatest inclusion is the blank topic card where you can make up your own topics and words. Just wipe clean after each game!

Simple, quick and fun. What more do you want from a party game?

More? The Chameleon also makes a fantastic drinking game too. Well of course it does!