When you see a small box game in a shop or online you might quite rightly think that there won’t be anything substantial to it. How much gaming goodness can they cram into such a small box? You will be quite surprised to learn that sometimes they can rival any big boxed title and the bonus being is that they can be easily brought to and played anywhere! Let’s take a look. 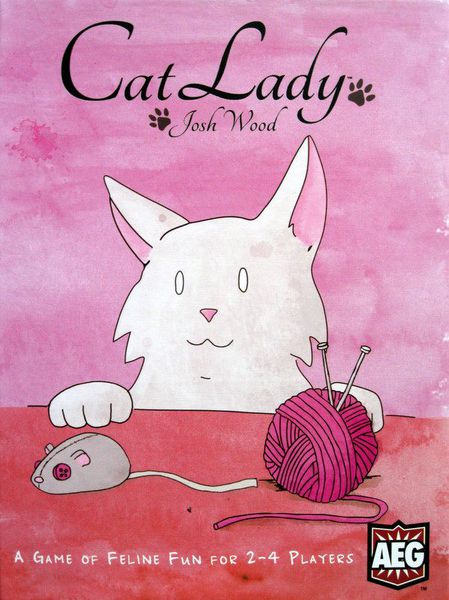 Cats. Put a cat on anything and it’s instantly good but let’s put our cat bias away for a moment. Cat Lady is a super simple card game for 2-4 players from AEG. Inside the small box, you get a deck of cards and some resource cubes. Cat food. It’s cat food. You also get an instruction booklet and that’s it. You are good to go!

In Cat Lady, players are cat ladies, part of an elite group of people including Marie Antoinette and Ernest Hemingway. During the game, you and your fellow cat ladies will draft cards three at a time, collecting toys, food, catnip, costumes, and of course lovable cats. But watch out! Make sure you have enough food for all of your feline friends or your hungry cats will subtract points from your score. The player with the highest total victory points wins the game!

So yes, it’s a card drafting / set collection game. You put the cards out in a 3×3 grid and players, in turn, select a row or column and then collect those cards. That row then gets blocked for the next player. This continues until 3×3 grid cannot be replenished. Cards can give you cats to place in front of you which will score points for you if fed (or lose points if not fed), food to feed them, toys to play with and other items. 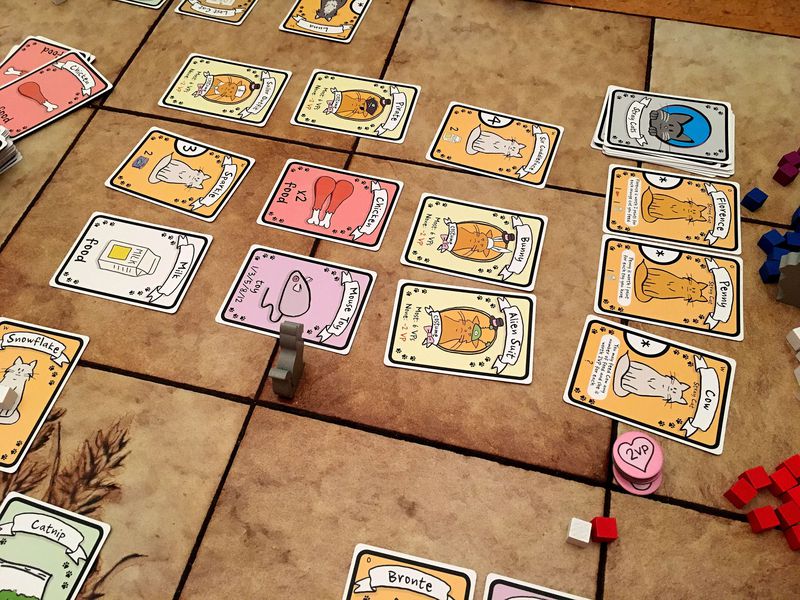 We have to admit we were surprised at how many times we have played this game and the hours sunk into it. It really is a fun game that offers a lot inside its small box. 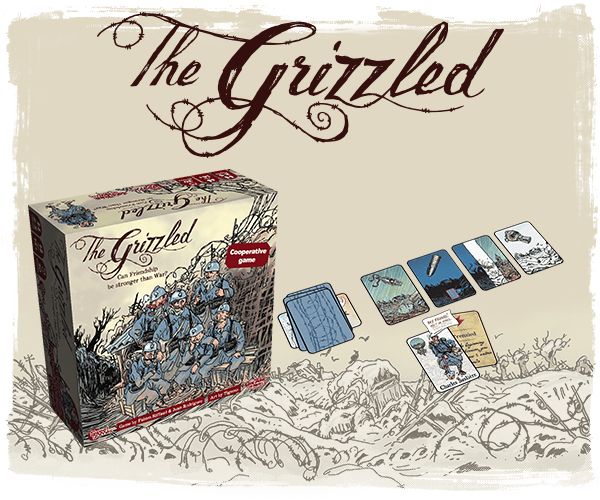 The Grizzled is a magnificent cooperative game that is set in the trenches of World War One and sees players trying to survive until the war ends. It’s tough. Very tough. You either win together or lose together. In the box, you get a deck of cards, tokens and some wonderful character standees.

The game is a card-driven survival game. Each round, the current team leader will choose how many cards every player draws. Then, going around the table, players must either play a card in their hand or back out of the mission. When they back out of a mission they must secretly choose to support a teammate. This support phase triggers when the mission is over. Each card represents either threats to the team (such as mortar shells and weather conditions) or negative personality traits (such as frightened or obsessive). At the end of the round, more cards are added to the draw deck. The game ends only if the players can deplete the draw deck as well as their hands without letting time run out.

If one threat shows up too many times, the team fails the mission. The team must play their threats correctly in order to gain any progress. However, and this is a big HOWEVER. Players cannot communicate with each other. The cards in their hands are kept secret, they cannot say what cards they have or are going to play. This may seem a little strange at first but thematically it’s given a reason in the rule book. You are soldiers in the trenches. Shelling is happening. Chaos. Noise. You won’t be able to hear what your comrades are saying. 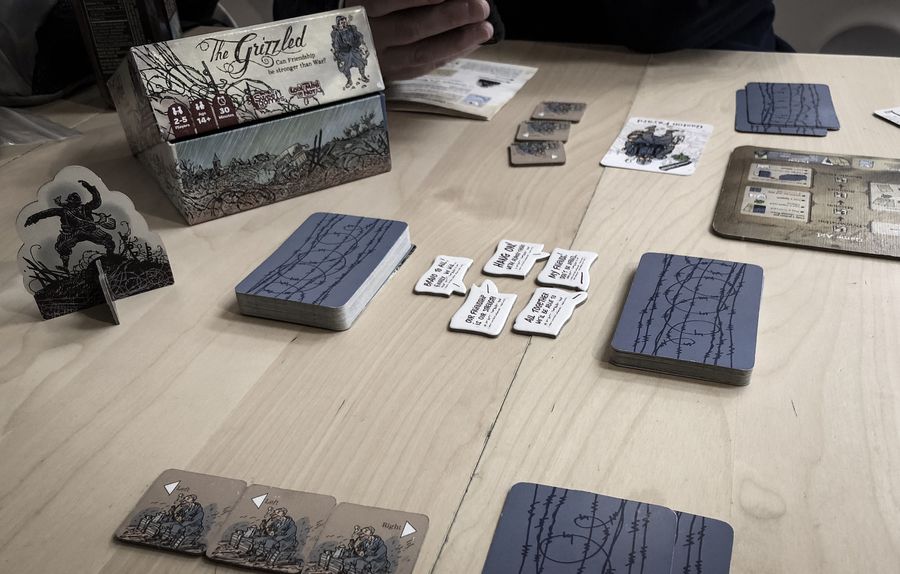 Cooperative games are usually sprawling big box games that hog tablespace (which is not a bad thing!) but The Grizzled manages to hit all the right notes with such limited components. A wonderful and truly unique experience. 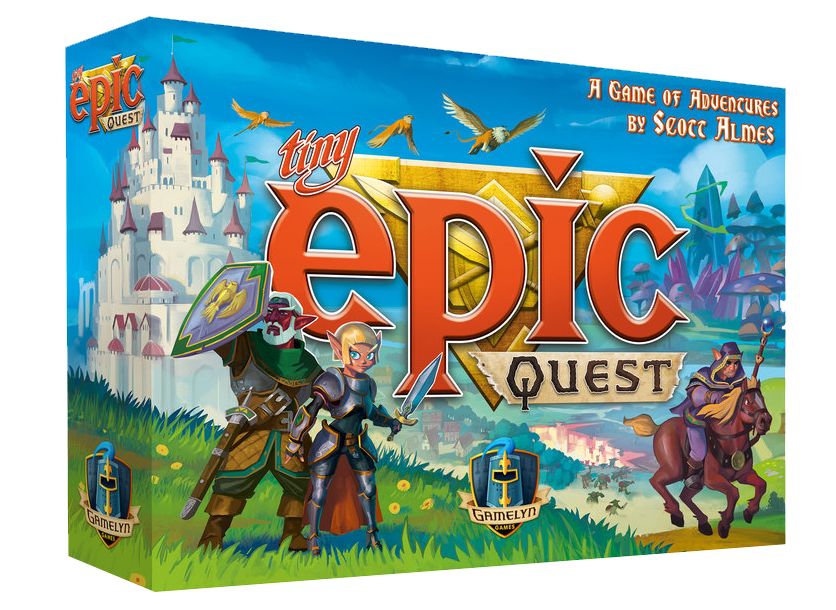 We bet you were all waiting for when the Tiny Epic series of games would show up. Well, here you go. Tiny Epic Quest. Our favourite of the series by far. The box is super small but contains so much its mind-boggling. This box must have some TARDIS like qualities to it as there is no way you can fit all that stuff in there.

In Tiny Epic Quest, players embark on a sandbox adventure. Each player controls a band of three elf heroes questing to save the world and the sacred mushroom folk from the intruding goblins.

Each round is broken into two phases: day and night. During the day, players travel far and wide, visiting villages to acquire quests, monuments to learn powerful spells, mushroom groves to seek guidance, and treacherous locations in search of artefacts! Acquiring artefacts empower the heroes with unique abilities; this may improve a heroes’ movement or combat, or their ability to learn spells or mitigate harmful dice rolls. Heroes must travel by foot, by horse, by raft, by boat and by gryphon (represented by a set of travel cards) to get to everywhere they need to go to satisfy their quests — or to position themselves for what night brings. As each type of movement is different and limited, players need to take careful consideration when travelling, and how they travel, if they wish to accomplish all of their goals.

During the night, players must face the challenge of their quests, and decisions, by rolling dice, hoping for fortune, and knowing when to quit. Will you press on? Or is it time to save your progress and rest? Tomorrow is another day. The game ends once the portal is closed or all the goblins have been eradicated. The player who has acquired the most victory points by slaying goblins, learning spells, and completing quests are crowned the winner! 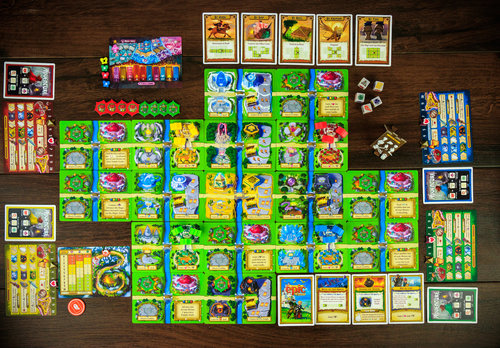 The amount of content in this box is insane. Just look at the above picture. Luckily the game is fantastic. It has all the elements of a great RPG. You can go on quests and level up, find armour and weapons, kill some goblins and various other things. There are two great mechanics in this game. Travel and the dice rolling. The travel system is mentioned above but the dice rolling mechanic is also great as each players rolls also affect all other players. It leads to some really funny situations. All in all, this is very much worth your time. A small box game that puts some big box games to shame. 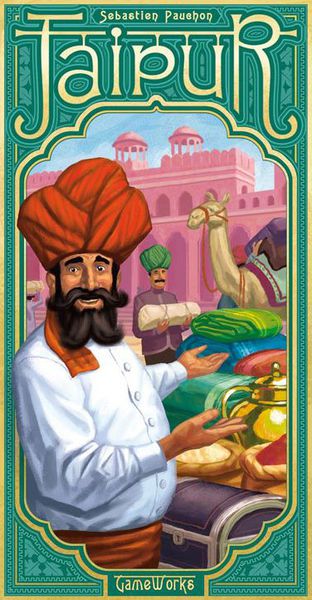 Probably one of the most well known small box games out there. Jaipur is an instant 2 player classic. In the box, you get a deck of cards and several goods tokens. That’s it! You are good to go.

As players, you are one of the two most powerful traders in the city. But that’s not enough for you, because only the merchant with two Seals of Excellence will have the privilege of being invited to the Maharaja’s court. You are therefore going to have to do better than your direct competitor by buying, exchanging and selling at better prices, all while keeping an eye on both your camel herds. 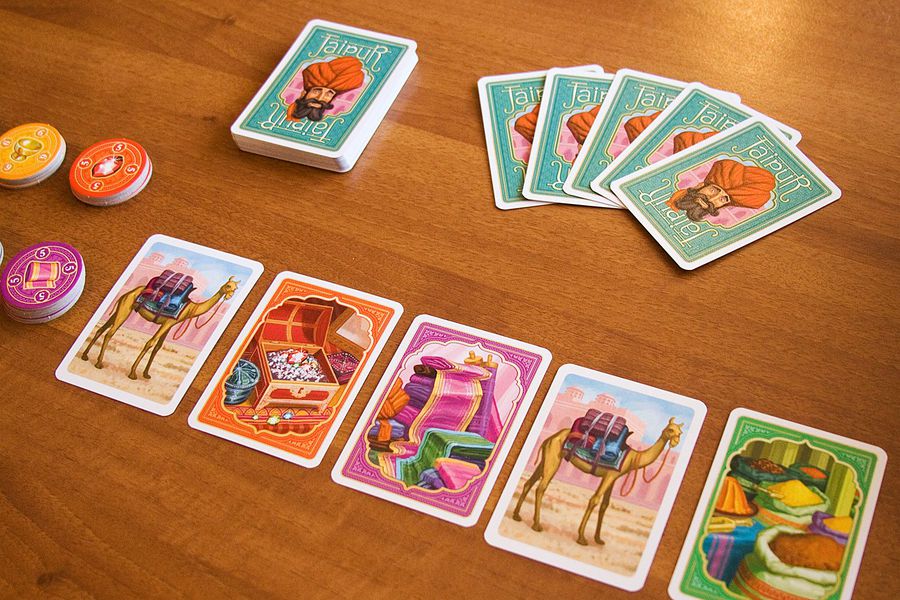 Yes, Jaipur is a trading game. A very fun one at that. On your turn, you must decide whether to take or sell cards. Very simple.

If you take cards, you have to choose between taking all the camels, taking one card from the market or swapping two to five cards between the market and your cards in hand. If you decide to sell your cards, you only get to sell only one type of good per turn, and you get as many chips from that good as you sold cards. Again, very simple. However, as goods get sold they decrease in value. You might be holding onto some rare gems in order to get maybe a fifth one to earn big money but then the second player swoops in and sells just two and decreases the value of that item for you on your turn. Swine! You need trade and sell by watching the market.

For the camel cards, you can’t sell them, but they’re paramount for trading as they can be used in the swapping of goods. They are even worth a few points at the end of the game for the player who has the most. We have had many tight games where the game was decided by the extra points from the camels. So use them wisely!

Jaipur is a fantastic game. Worthy to be placed in any game collection and it can be played just about anywhere! Joy! 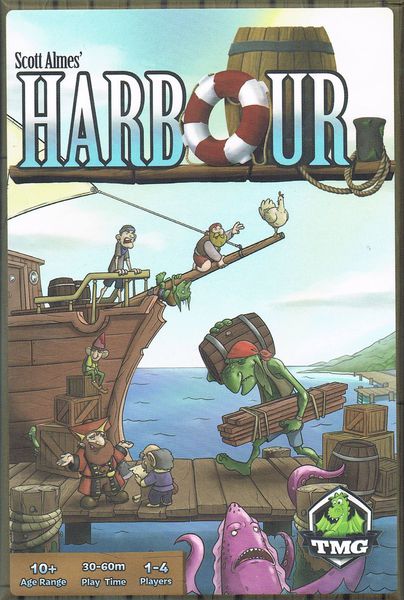 Oh boy. This is an amazing game. Harbour. Crack open the box and you will see 4 meeples, resource tokens, a deck of cards, a marketplace card and player cards. It’s quite a lot for such a small box. Oh, it’s by Scott Almes. The Tiny Epic series creator. Now we know why.

Dockmaster Schlibble and Constable O’Brady cordially invite you to visit their bustling Harbour town! Attend to business at the Trader’s Guild or the Masoner’s Hall. Break for lunch at the Sushi Shop, or stop off for a drink at the Pub. Don’t forget to check out the Wizard’s Traveling Imaginarium before you go! But no matter where you go, keep on the lookout for a bargain… the denizens of this town are always wheeling and dealing! Collect and trade resources as you visit the various buildings of Harbour, and cash them in to buy your way into the town. Whoever has the most points worth of buildings when the game ends, wins!

Harbour is a worker placement game. Yes, a small box worker placement game. Players will move their sole worker from building to building and collect various resources from those buildings. We are talking fish, livestock, wood and stone. You will then sell these resources in order to buy the buildings. Buildings give you points and points win you the game. The game end is triggered when the first player buys their fourth building. Owning a building has another benefit. Other players who visit your buildings have to pay you a single resource in order to use that space. So if you notice players using a building a lot, buy it! Whenever a building is bought, it is replenished from the building deck so there is always a set number of buildings for purchase depending on the number of players.

The main part of the game is the market manipulation and it’s brilliant. Whenever a player purchases a building, the value of the resources they used decreases and any resource that wasn’t used in the purchase increases. This means you have to have to watch the market and see what other players are doing so you can take advantage of the market prices. Wait too long and you will get burnt, your high-value stock is now worth nearly nothing. Sell too early at a lower price and you also might lose out as the next player might just change the market in your favour. Do wait? Do you sell?

Harbour is just about perfect. There are a ton of buildings and different character boards that each have their own skills so the replay value of this game is off the charts. An amazing small box experience and an amazing game in its own right regardless of box size. If you see this game when you are out and about next time, buy it. Don’t think. Just buy.